WHEN you drive along some of the busy streets in downtown Johor Baru, chances are you will see individuals standing by the road and waving at motorists to park there.

These invitations to park are not without cost — the parking touts usually expect payment in return for their “services”.

The presence of these individuals, commonly known as jaga kereta or ulat parking, are nothing new to city folk, as they stand around waiting for handouts from motorists who park their vehicles at either legal or illegal spaces.

The touts not only wave to signal that there is an available parking space, but also guide the motorist into the spot.

Once the vehicle is parked, comes their outstretched hand, asking for money.

Some would stand near the vehicles while waiting for the drivers to come out of their vehicles before looking at them expectantly.

Others, however, are not at all shy about demanding payment and can turn abusive when ignored.

Conversations with some former parking touts revealed that they could earn about RM50 a day and up to RM100 or more on weekends.

Freelancer Jamie Lee, 30, said she usually gave RM2 to the touts out of sympathy for them.

“I pity them because they stand under the hot sun all day so I give them small change to buy food and drinks.

“Most of the touts will accept whatever amount I give them.

“However, I have encountered one or two who complained that RM2 was too little and asked for RM5, ” she said, adding that she normally obliged to avoid getting into trouble with them.

Photographer Razif Razali, 31, who frequents Jalan Trus and Jalan Tan Hiok Nee for breakfast, said he chose to pay for fear the touts would damage his car otherwise.

“It is common to see them in the city centre.

“There are so many of them now.

“At one point, there was one tout manning every other parking space.

“When they see vehicles approaching, they wave and direct them to parking spaces and wait by the car for payment.

“I pay them because I want to avoid unwanted incidents, such as damage to my car.

“I have friends who claimed that their cars were scratched after they refused to give the touts money, ” he added.

Razif said it was frustrating because the touts would not only hang around illegal parking spots, but also at valid parking bays.

“Besides paying the local council’s hourly parking coupon, I am also paying the touts because I am concerned about what may happen to my car, ” he said.

Businesswoman A. Kavitha, 44, said the touts were tarnishing the city’s image.

“They usually hang around to make a quick buck and I think this gives Johor Baru a negative image as a city.

“The authorities should do more to resolve this problem, ” she said.

The law stipulates that, “if any person, otherwise than with lawful authority, remains on any road or at any parking place for the purpose of importuning any other person in respect of the watching or cleaning of a motor, vehicle, or for the purpose of directing any driver of a motor vehicle in respect of parking on such road or at such place, he shall be guilty of an offence.”

Those found guilty under the Act can be sentenced for up to six months or fined RM2,000, or both.

However, this has not deterred parking touts, who have plagued the city for years, and according to locals, their numbers have been increasing of late.

A coffeeshop owner, who only wanted to be known as May, said parking touts have been hanging out in front of her shop in Jalan Trus since she started operating 12 years ago.

“Back then, there was only a handful of them. Over the years, the number increased.

“There have been noticeably more new faces since the conditional MCO was enforced in May last year, as most business activities that had been closed during the MCO were allowed to resume and traffic increased.

“I presume it is due to more people losing their jobs because of the economic uncertainty brought about by the pandemic.

“The touts used to be middle-aged men but nowadays, some of the new touts are young, in their early 20s, ” she told StarMetro.

She said the parking touts would each find parking spots to man and collect money from motorists.

May added that some of her customers were generous and gave touts up to RM10 as charity.

“It is also common to see touts arguing among themselves and even get into a scuffle over who gets which spot or when one gets more money than the other.

“As long as they do not drag their arguments into my shop or affect my customers, we just let them be, ” she said.

Jewellery shopowner M. Karthik, 52, said there used to be parking touts in front of his shop but since the area had been turned into a no-parking zone about a year ago, the touts moved to other spots.

He added that the authorities were quick to tow away vehicles that parked illegally in the zone.

Mixed-rice stall owner Lim Hock Liong, 64, who employed an ex-parking tout about three years ago, suspected most of them were drug addicts.

“Many do not have a place to stay and cannot get a job because of their addiction.

“They do this because it is easy money to feed their unhealthy lifestyle, ” he said.

He said many welfare organisations and kind-hearted people also handed out free food to them so they were not worried about going hungry. 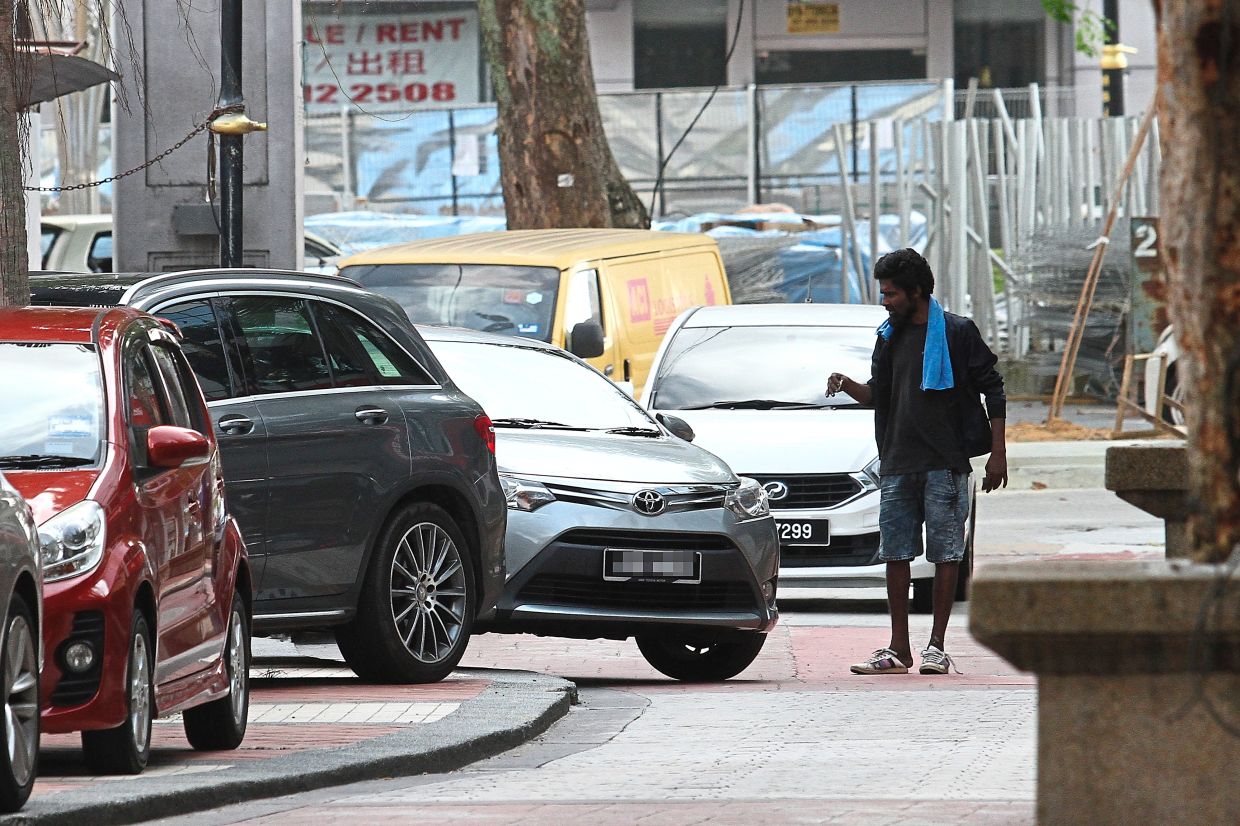 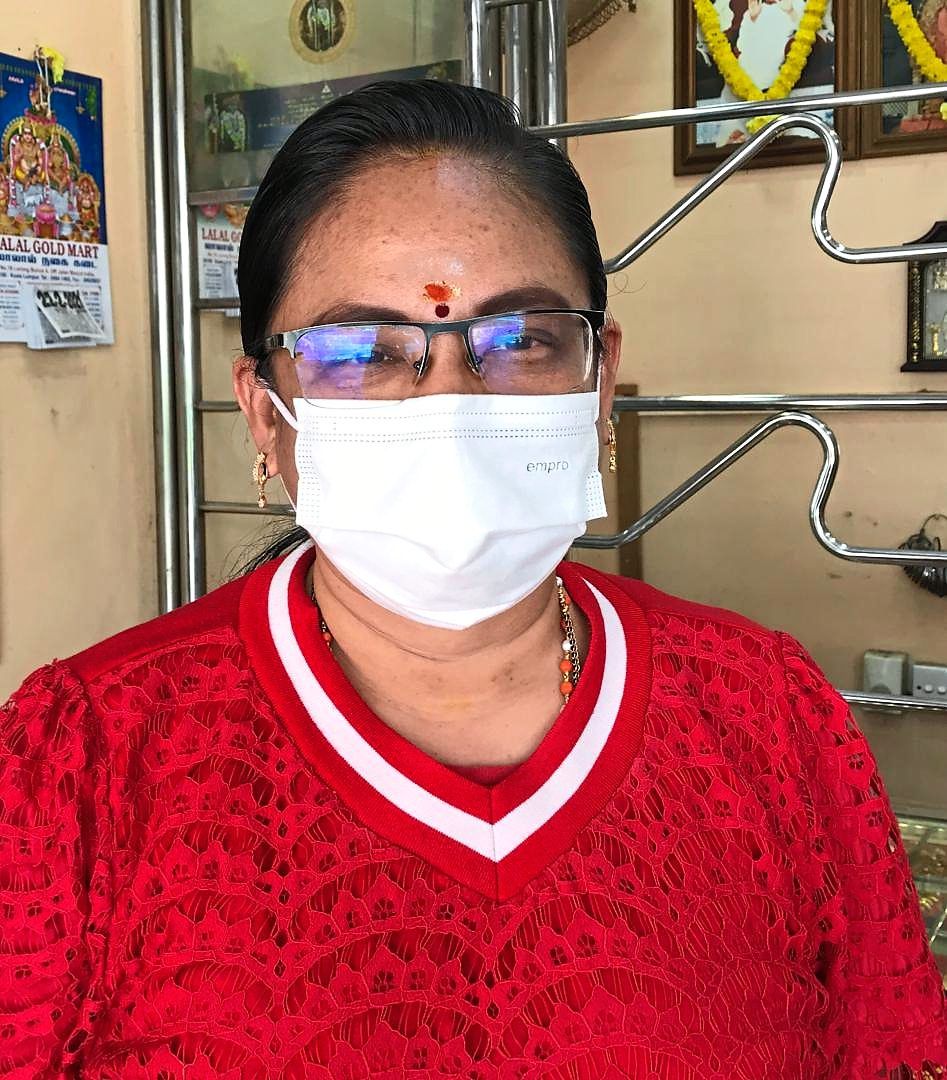 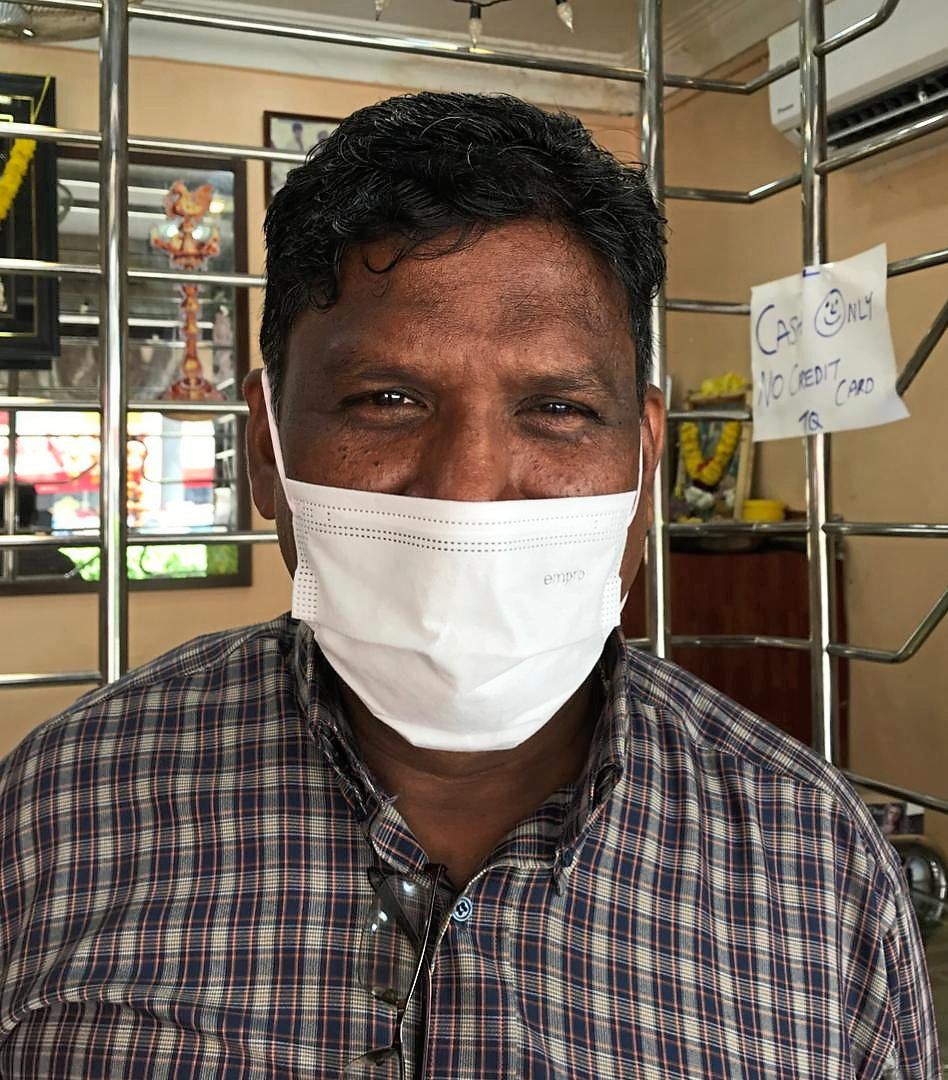 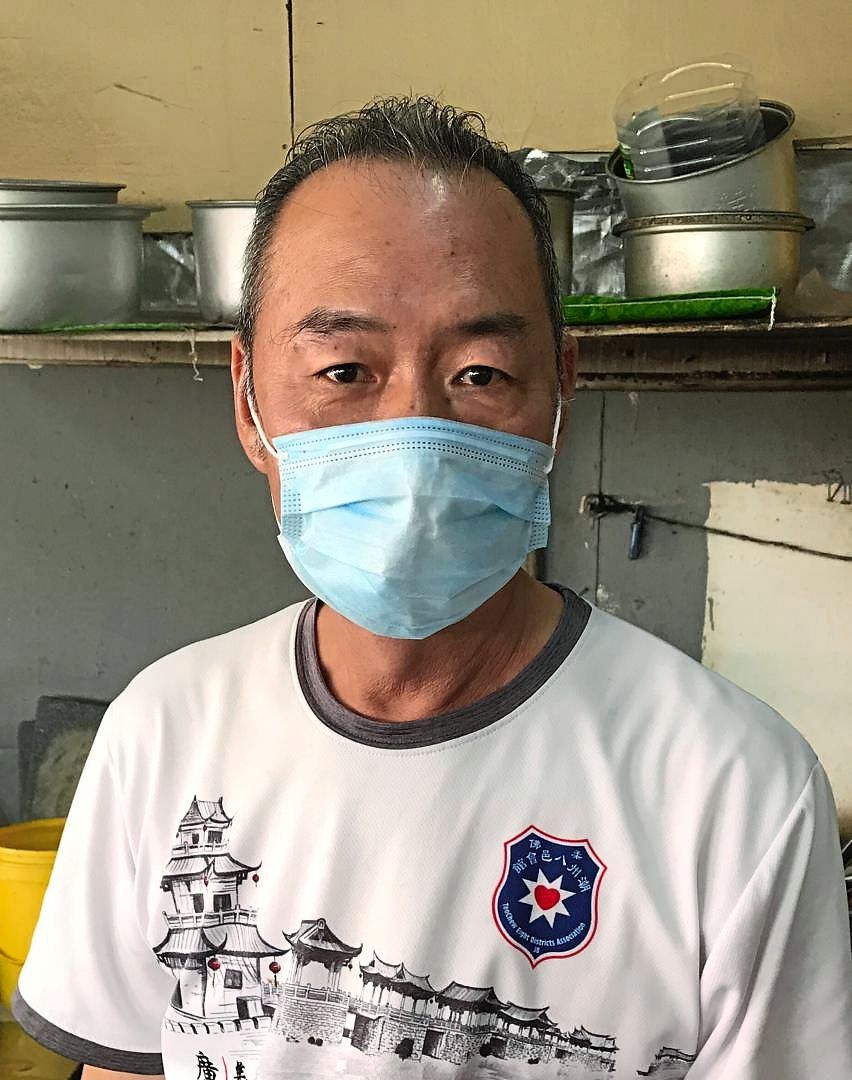 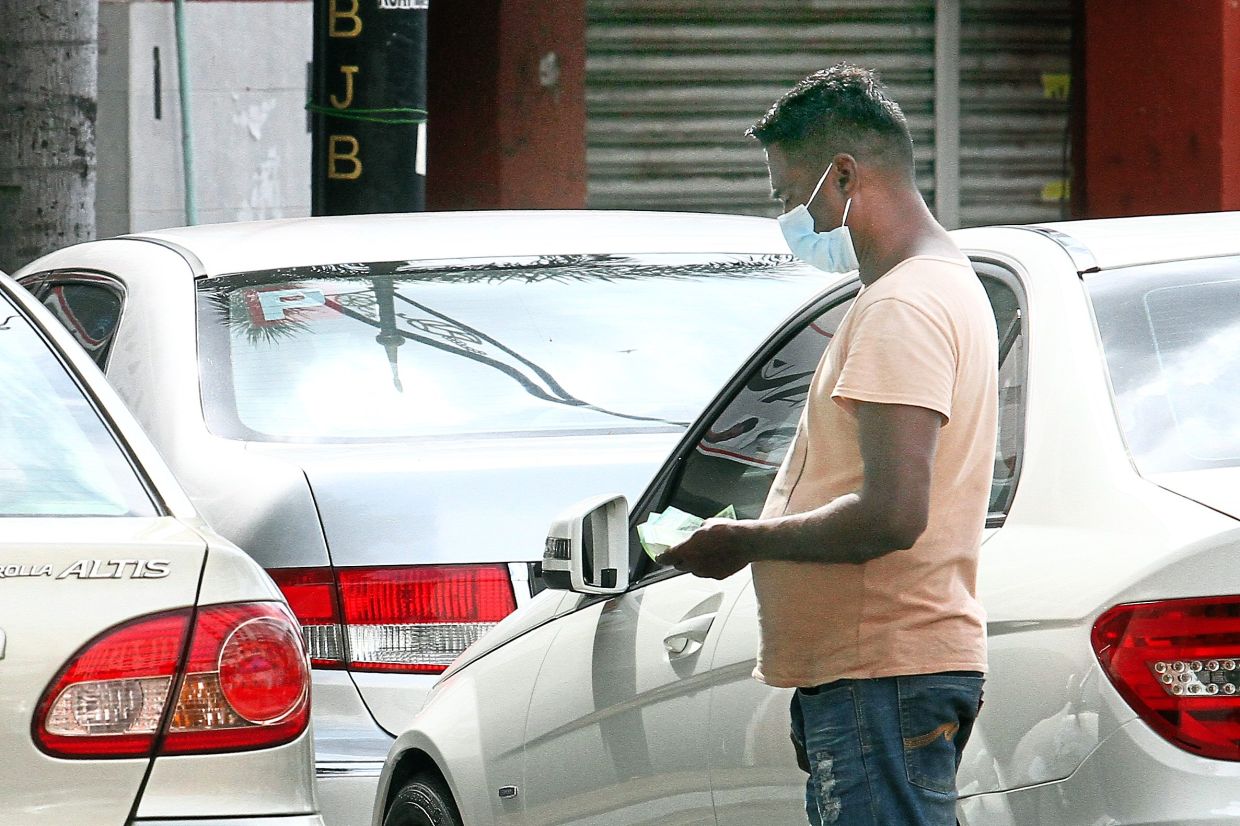 Razif hands money to touts out of fear that they may damage his car if he ignores them.

Karthik says touts no longer hang around in front of his shop as the area is now a no-parking zone.

Lim says many parking touts are suspected drug addicts and cannot get a job.

A parking tout counting the money he collected from motorists along Jalan Trus in Johor Baru.