DBKL takes soft approach to encourage use of carparks 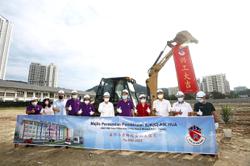 The multi-storey carpark (right) for PPR Desa Tun Razak has yet to receive the CCC, so residents currently park their cars by the roadside. — Photos: ONG SOON HIN & SAMUEL ONG/The Star

DESPITE a dearth of parking spaces in People’s Housing Projects (PPR) and Public Housing schemes (PA) all over Kuala Lumpur, there are few takers at new multi-storey carparks built to overcome the shortage.

Residents of these low-cost housing schemes still prefer to double- and triple-park their vehicles than utilise parking bays at the carparks built by Kuala Lumpur City Hall (DBKL).

Some even leave their car gear in “neutral” to allow it to be pushed manually if needed.

Over the last five years, eight multi-storey carparks have been built with an average cost of RM30mil each.

Another four are in various stages of construction.

However, at the eight that are operational, less than half of the parking bays are being used by the flats’ residents.

In some areas, only a quarter are being used. Anwar says residents’ issues will be addressed to ensure the multi-storey carparks are utilised.

Of the four under construction, two are completed but have not obtained the Certificate of Completion and Compliance (CCC).

The two that have yet to obtain the CCC are in PPR Hiliran Ampang and PPR Desa Tun Razak, while the two uncompleted ones are in PPR Kampung Baru Air Panas and PPR Desa Rejang.

In March 2016, DBKL announced the construction of the 12 multi-storey carparks in various PPRs and PAs in the city at a cost of RM370mil.

Most of them come with added facilities such as futsal court, hawker centre and surau. Residents of PPR Hiliran Ampang in Jalan Ampang Putra are eagerly waiting for their multi-storey carpark to be opened.

However, less than 30% of the parking bays are being used by residents and in all the buildings, at least two floors remain vacant. Addressing the issue

DBKL socio-economic development executive director Anwar Mohd Zain said the facilities were built to address the lack of parking space faced by residents at low-cost government housing facilities all over the city.

“We are disappointed that it is not being fully utilised.

“We are, however, aware why there are no takers and are currently working on addressing the issue, ’’ he assured.

He said one of the main reasons people were rejecting the carparks was the rental.

DBKL charges RM60 a month for each parking bay. This multi-storey carpark at PPR Taman Mulia in Bandar Tun Razak appears to have no takers.

However, after receiving complaints on the pricing, the local authority agreed to reduce it by 50% to RM30 a month.

“We are subsiding a big chunk of the amount, ’’ said Anwar.

He said DBKL was incurring a loss by reducing the parking charges that included manpower (security), CCTV maintenance, water and electricity costs.

“The cost of each parking bay is roughly about RM100, so we are subsiding quite a bit here, ’’ he pointed out.

He said many residents were receptive to the discount but that was not the only reason they were not utilising the facility.

“We spoke to several community representatives and discovered that convenience played a big part in their decision not to park in the lots provided.

“Some found the 10- to 15-minute walk to the parking lot from their units too far and unsafe.

“We don’t have much choice in the parking lots’ locations as we face a space constraint issue, ” said Anwar, pointing out that the PPRs were built many years ago. Some multi-storey carparks come with a food court.

Another issue was the condition by DBKL that a tenant must clear all backlog of rent and utility bills to qualify for a parking bay.

“There must be no backlog of unpaid rental and utility bills; it is one of the conditions we impose for the issuance of a parking access card.

“When we received complaints on this, we allowed those with three months backlog to get access cards, ” said Anwar, noting that even that was frowned upon.

“It defeats the purpose if everything is handed out for free as there is still the high maintenance cost to look at, ’’ he reiterated.

He stressed that DBKL knew who among the residents were in dire straits and those who took them for granted. On complaints about the distance, he said DBKL was willing to build a sheltered walkway connecting the flats to the carparks.

Anwar also acknowledged that some delays were attributed to establishing the Joint Management Body to manage the place.

“In PPR Desa Tun Razak, we are working towards resolving some issues there, ’’ he said, elaborating that there were units that had been sold to tenants.

“We need to hand over the management reins to the residents and it will take some time.

But the residents will have to learn to manage the place on their own and this will help them appreciate the issues faced when managing a building, ’’ he added.