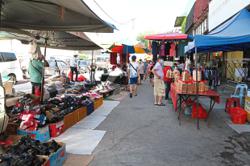 Traders complain that trading lots along Jalan Bubut are not conducive to business.

SEVERAL Kepong Baru morning market traders who were relocated to make way for a drainage upgrade project, want to move back to their original lots.

They complained that the new site in Jalan Bubut was not conducive for business.

They said that they had been promised that they could move back to their original location along Jalan Bangau 1 once the upgrading project was completed.

However, they had now been told to remain at the temporary trading lots until the second movement control order, enforced since Jan 13, was lifted.

Kepong Community Service Centre head Yee Poh Ping said the traders’ plight had been highlighted to the relevant authorities last week, but there was no green light for them to move back to their original site.

He hoped that the authorities would review the decision and allow the traders to move back to their previous lots.

“They can move in the afternoon when the number of customers start to dwindle, and limit each stall to one person while moving.

“We can also hire a forklift to move heavier stalls and adhere to the standard operating procedures, ” he added.

Hardware stall owner Kenny Cheong, 53, said the temporary location was a safety hazard as the road was narrow and traffic was heavy.

“Visitors say the location is unsafe as vehicles pass close to pedestrians.

“Furthermore, this location does not get as many customers as our original site in Jalan Bangau 1, ” he explained.

Cheong said that while other traders went through a balloting process to determine their temporary lots, he and 12 other clothes sellers were asked to trade at Jalan Bubut to make way for the drainage upgrading project.

“Our location is the worst. We hope we can move back to our original site as soon as possible, ” he said.

“We could only sell two pieces of clothing at most.

“Sometimes cars are parked on the roadside here, making it difficult for us to open our stalls, ” she added.