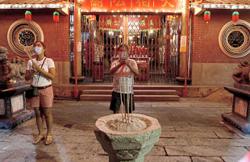 THE annual Chneah Hoay (flame-watching) ceremony at Hai Choo Soo Temple in Tanjung Tokong, Penang, has been cancelled this year due to the pandemic.

Poh Hock Seah Temple, in a statement, said the decision was made after a thorough discussion by the temple committee members.

“The flame-watching ceremony is considered a big-scale religious event usually drawing a large number of devotees. It is rather hard to control the crowd.

“The decision to cancel was made to ensure public safety and health.

“We hope everyone can understand the situation, ” the statement read.

Each year, the flame-watching ceremony usually takes place near midnight.

It is a tradition to read the Tua Pek Kong deity’s predictions based on the stability, brightness and strength of three bursts of flames from the incense urn.

The statue of the deity is brought from Poh Hock Seah Tua Pek Kong Temple in Lebuh Armenian to Hai Choo Soo Temple in Tanjung Tokong for the ceremony and is returned the next day.

“We hope that everyone will be healthy and safe in the new year.

“We also hope the pandemic will be contained soon so that we can have our flame-watching ceremony in 2022, ” the statement read.

“We will monitor the situation and make an announcement two weeks before Chinese New Year, ” he said.

The resident deity’s birthday falls on the sixth day of the Chinese New Year.

During this time, thousands will gather at the temple for a series of activities, including the flame-watching ceremony.

Through the ritual, devotees learn about the deity’s predictions for the economy in that particular year.