Velasamy says the generosity of Malaysians has resulted in an overlap of items given to the needy in Johor Baru.

The number of people giving out food packs to those living on the streets has tripled since the first movement control order came into effect in March last year.

Checks by StarMetro revealed that the homeless could receive free food from up to eight non-governmental organisations (NGOs) and individual donors each day.

To prevent wastage, Sechinah Association Johor Baru began cutting down on the number of meals handed out daily.

Its chairman James Issachar said the food initiative started in May last year after hearing about people starving on the streets as most activities came to a halt during the MCO.

“We started with 20 packs of food and eventually increased the volume to 170 packs over the weeks, as we noticed there were a lot of people living on the streets.

“However, over time, we noticed that those taking the food were keeping a few packets with them, so we gradually cut the number of packets back to between 30 and 50.

“Our aim is not only to feed the homeless but also to make it a point to meet them personally to understand their plight and help them with any problems they may face, ” he said.

Issachar said the association had helped to get at least 50 people off the streets by placing them at its halfway house in Jalan Abdul Samad, before providing them with job matching opportunities.

“So far, we have helped to provide training and spiritual development as well as set them up with employers for jobs such as security guards, car wash workers and work at vegetable and animal farms.

“We want to help those who have no choice but to live on the streets because of job loss or family problems, and help them regain a secure footing, ” he said.

He acknowledged that there were instances of individuals returning to the streets despite Sechinah’s attempts to help them.

Another NGO, Insane Kasih (I-Kasih) had been giving out 230 dinner packs daily for the last four months in three locations — near the old KTM station in Jalan Tun Abdul Razak, the Laman Tun Sri Lanang carpark and Larkin Sentral bus terminal — according to its head Zuraini Tahir.

“Based on our calculations and observation, there are about 180 of such individuals in the city centre alone and another 50 on the outskirts.

“Their numbers have mushroomed since the first MCO as many have lost their jobs here and also in Singapore, ” he said, adding that the NGO faced financial challenges in sponsoring the daily food packets.

Zuraini pointed out that giving away free food was not a long-term solution to help this group of people.

He disclosed that the NGO hoped to have its own building soon to set up a halfway house to shelter the homeless.

He said there were limitations to the government shelter, Anjung Singgah, as it imposed an age limit and only took in those who were looking for a job.

“We sympathise with the homeless and hope to do more for them, especially the older and sickly individuals who can no longer work and have nowhere to go, ” he added.

Meanwhile, Johor Baru Malaysian Red Crescent Society deputy chairman Velasamy S. Pillay said the generosity and kindness of Malaysians had resulted in an overlap of items that were given to the needy in the city.

He emphasised that coordination was needed among the NGOs so that the aid could be given out more systematically.

“I was informed that 17 NGOs gave out about 3,000 packs of food there on Dec 31, so there must have been some food that had gone to waste that day.

“We had a meeting recently with various government agencies led by the Welfare Department, and NGOs to discuss about developing a registry and database.

“One of the ideas was to give the homeless a card with their data and dependents’ information because we see some of them taking six or seven packs of food at one go.

“We are not sure whether they have dependents at home waiting to be fed.

“With the data, more targeted assistance can be given to them, ” he said. 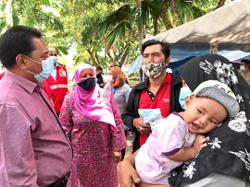 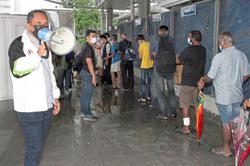