Shen showing off her bird-themed, hand-painted clothing, including one depicting a pair of Greater Racket-tailed Drongos which she often sees around her studio.

GETTING paint on clothing would normally be considered a bad thing, but not so for creative individuals with out-of-the-box ideas.

It could even serve as a fashion statement, just like the handiwork by Chinese brush painter Shen Ying and her students in Penang illustrate.

Instead of traditional canvasses or rice paper, they painted on plain-coloured clothing and fabrics to create unique wearable art.

“Art isn’t limited to something you put on walls. It can also be the clothes you wear daily.

“Rather than buying mass-produced pieces, why not create it yourself?

“Every piece will be one-of-a-kind and something you can be proud of, ” Shen said at the opening of the Oriental Charm Hand-Drawn Fashion Show 2021 recently.

Held at Ming Fine Art Gallery in Gurney Paragon Mall, Penang, it featured 300 pieces of clothing, bags and fans that she and 28 students made.

While most were on static display, a handful were paraded in a catwalk by the artists who made them, drawing applause from the socially-distanced crowd.

Their creations had diverse designs and motifs, but traditional Chinese painting subjects like birds and flowers were predominant.

“The students are aged from seven to 90. Some are working adults. With most now working from home, this is a fruitful way to occupy their free time.

“Almost any fabric can be used. We just swap regular Chinese ink for fabric dyes. The only other ingredient is imagination, ” Shen pointed out.

The 54-year-old’s own pieces feature birds, as many different species can be spotted at her studio at the base of Penang Hill — including the Greater Racket-tailed Drongo which is noted for its ability to mimic the sounds of other birds and mammals.

The other artists included Beatrice Ang Rui Ling, nine, who was inspired to paint a satin pink robe with rambutans after a recent visit to an orchard.

“We’re often so busy with life that we never pause to appreciate the things around us. But when you draw or paint, you are able to see its beauty, ” Oo shared.

“The ongoing pandemic may have changed creative economies, but not necessarily for the worse. It challenges us to be creative and find new ways of doing things — like turning traditional artworks into something wearable, ” he noted.

The exhibition, which was originally slated to run until Jan 24, had to be cut short due to the MCO that started in Penang on Jan 13. 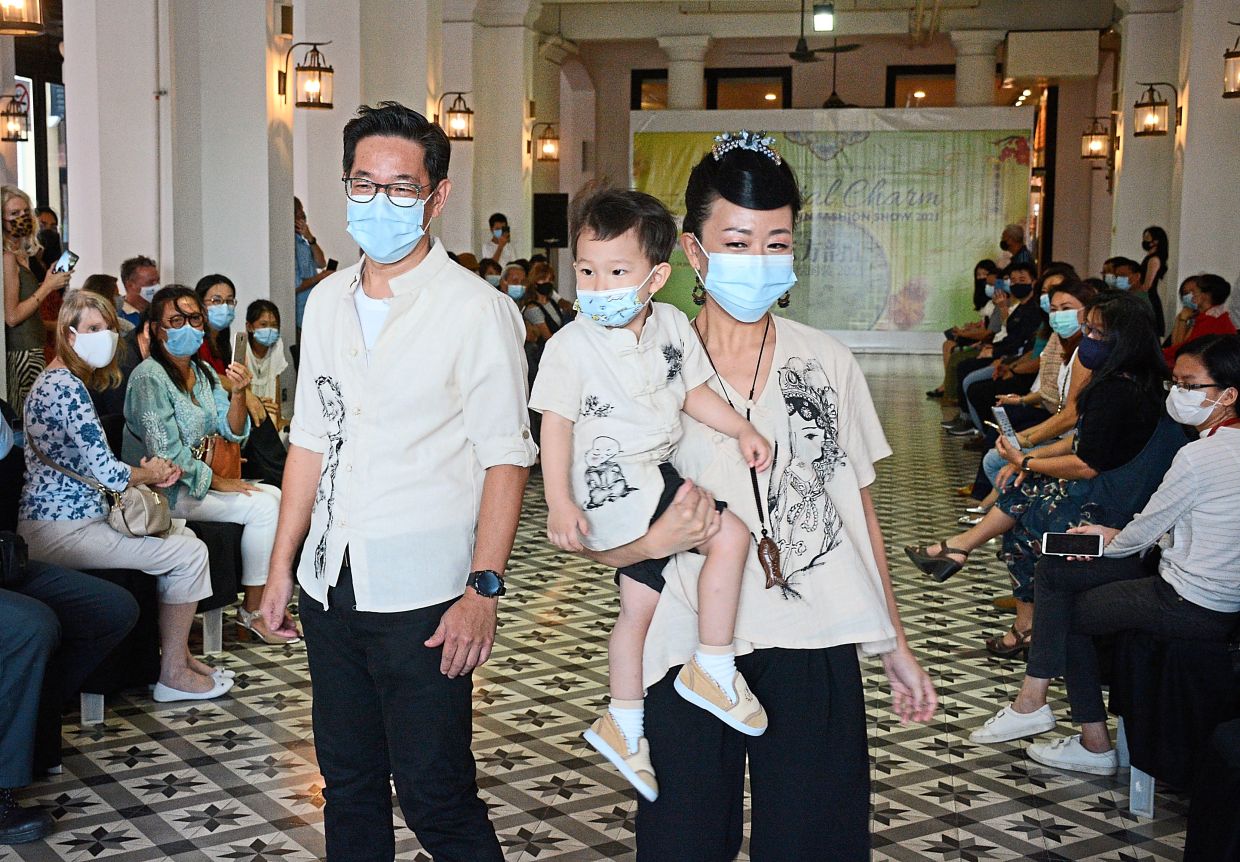 Shen showing off her bird-themed, hand-painted clothing, including one depicting a pair of Greater Racket-tailed Drongos which she often sees around her studio.

These shirts are wearable art pieces, with each being hand-painted by participating artists. (Jan 12,2021) - JEREMY TAN/The Star

The participating artists – including Beatrice (middle) – posing for the cameras in their unique, hand-painted clothing.

Visitors to the exhibition checking out the collection of hand-painted fans displayed at the Oriental Charm show at Gurney Paragon Mall.