THE extended rainy spell is adding to the problems faced by vegetable farmers who now have to tackle produce with fungal diseases.

“Crops like tomatoes and capsicums are affected by fungus due to the damp, ” he said.

“Some crops are okay as they are grown under plastic covers but that reduces exposure to sunlight.

“When supply is low, prices will go up.

“Some vegetables which used to be sold at RM3 or RM4 per kg are now sold at RM5, ” he said. Vegetable stall vendor Tan Kah Hoon said constant rain over the past two weeks has caused the prices of vegetables to rise.

“The vegetables are damaged by the downpours and supply is lower than usual, ” she said when met at Chowrasta Market in Penang.

“Also, demand for vegetables is not much due to the Covid-19 pandemic.

“People no longer buy a lot of vegetables. I now receive 50% less orders.

“The problem is, we still have to get rid of the damaged and soggy vegetables.”

Tan said the price of spring onions had doubled due to damage from rainfall.

“We usually sell them at RM8 per kg but the price is now RM20.

We have no control over the weather, ” she said.

The Star reported on Dec 14 that the rainy spell had caused the prices of vegetables to soar, in some cases by over 100%.

The problem was further compounded by the lack of farmhands due to the closed border as a result of movement restrictions.

Meanwhile, fishmonger Shah Jahan Asan Aliar said there had been no supply of small fish for the past two weeks.

“We have no fresh sardines, mackerel and other small fish. We have been using old frozen stock which can last another week.

“With the downpour, deep-sea fish can still be caught but not the smaller fish, ” he said.

“The price of sardines will probably go up by a few ringgit if the bad weather continues, ” he said. 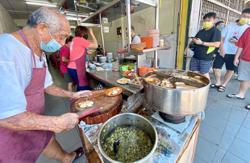