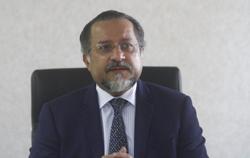 AFTER renting a place for more than 10 years, Sobri Ahmad just can’t wait to move into his new terrace house at Taman Perda Indah in Tasek Gelugor next year.

“I am honoured to be offered a terrace house on the mainland.

“Finally, my family and I will have a place to call our own.

“The RM500 I pay for monthly rent can now be used to pay for my new home, ” said the 58-year-old Penang Civil Defence Force (APM) member who specialises in flood and disaster operations.

Sobri was among 90 frontliners who received their offer letters for affordable homes in Penang with price ranging from RM72,500 to RM400,000.

They were recognised for their hard work and contributions in battling the Covid-19 pandemic.

Equally excited was Muhamad Ridhwan Yahaya, 30, who will move into his new home in Balik Pulau with his wife after getting married last year.

“We are now staying with my family and I am happy to finally own a home.

“I am glad that my hard work is appreciated.

“My colleagues and I have been keeping the city clean throughout the movement control order (MCO) period, ” said the employee of Penang Island City Council (MBPP) Urban Services Department.

He said that out of the 90 successful applicants, eight were from MBPP, 33 from MBSP and 49 from other government agencies.

“The 90 frontliners have contributed tirelessly to the community and we appreciate that, ” he said during a press conference at City Hall at the Esplanade on Friday.

Jagdeep said the process involved matching the applicants with suitable projects before offering them the available units to ensure that everyone gets a unit if they are qualified.

“The applications will have to go through the state’s Selection Process Enhancement Committee comprising 15 exco members and assemblymen.

“The committee has met for 60 times since it was established in November 2013.

“We made evaluations and have approved 55,905 applications so far.

On the SOP compliance rate in Penang, Jagdeep said that as of Wednesday, a total of 1.23 million checks had been conducted on Penang island and mainland.

On the councillors’ posts at both councils, Jagdeep said he had received 62 applications from 53 non-governmental organisations (NGO), a private company and an individual.

“The state has announced that representatives of all NGOs throughout Penang are allowed to apply to be city councillors.

“The NGOs can nominate their members to fill the quota allocated for NGOs before the closing date on Dec 15.

“Previously, we appointed councillors from only two NGOs, which are Penang Forum and Penang Chinese Chambers of Commerce.

“We will be having a meeting soon to finalise the nomination.

“The meeting is expected to be attended by representatives from political parties and both city councils.

“The appointment of councillors will take place in the first week of January next year, ” he added.