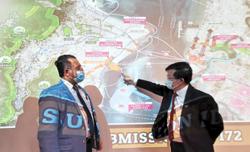 THIRTY-SIX finalists have been shortlisted for the final round of the Penang Bay International Ideas Competition.

“Half of the entries were from overseas. This shows the global interest in Penang,” he said in a press conference at UAB Building in China Street Ghaut on Monday.

“There were 5,000 downloads of the competition brief by website visitors from 79 countries.

“The competition was also featured in an international architecture magazine.”

Think City, and developed by the George Town Conservation and Development Corporation to create a city core between Butterworth on the mainland and George Town on the island.

He said the ultimate vision for Penang Bay was to transform the George Town and Butterworth waterfronts into an Sustainable Development Goals (SDG) Cities Compliant Zone powered by the green, digital and creative industries.

Jagdeep pointed out Penang Bay would be the first in Malaysia and an opportunity to carry out Penang’s urbanisation process in a more sustainable manner.

He said a new award called ‘People’s Favourite’ was also introduced to select the submission with the highest number of votes.

He said the public could vote for up to a maximum of three finalists from the 36 top finalists.

“The finalist with most votes will receive the ‘People’s Favourite’ award and the submission will be displayed among the winners.”

Jagdeep said the winners would be announced in January.

A virtual exhibition will be made available to the public soon for them to view and vote for their favourite submissions on the competition website.

For further details, go to www.penangbaycompetition.com