A TOTAL of 22 non-governmental organisations (NGOs) are calling on the Kedah government to urgently address recent occurrences of deforestation activities at a 35ha plot within the Greater Ulu Muda Forest.

The NGOs comprising various consumer, environmental and education groups are calling on the state government to clarify the situation given recent assurances that the forest reserve would be protected as a water catchment.

Sahabat Alam Malaysia (SAM) president Meenakshi Raman, who is the representative of the NGOs, said they were shocked to learn about recent deforestation activities within the forest reserve.

“According to the satellite images taken between May and November this year, the 35ha plot of natural forest near Tasik Ahning in the Bukit Keramat Forest Reserve has been clear-felled and terraced for what appears to be a plantation.

“The images also revealed earlier deforestation and terracing in an area close to this most recent deforested area.

“Thus, we call on the Kedah government to urgently clarify the situation, ” she said.

Meenakshi said the NGOs were alarmed by the current deforestation seen in the satellite images and felt that such activities would undermine the ability of the state to receive Federal funds.

The Federal funds for forest protection were from sources like the Ecological Fiscal Transfer for Biodiversity Conservation (EFT) proposed in Budget 2021.

The EFT is allocating RM70mil for states that protect their forests.

Meenakshi said the NGOs hoped the Kedah government would check and monitor deforestation.

“This includes halting further logging and approval of forest conversions for plantations or other environmentally-damaging uses in the Greater Ulu Muda Forest, ” she said.

“We wish to underscore that the funds from the Federal Government to the Kedah government must be used to maintain the forest in perpetuity for the valuable ecosystem services it provides.

“They include ensuring water security, regulating climate and protecting biodiversity.

“By protecting its forests, the Kedah government plays a critical role in supporting Malaysia to fulfil its international commitments under the Paris Agreement on Climate Change and the Convention on Biological Diversity.

“As such, the state government must not undermine such efforts by allowing logging in the Greater Ulu Muda Forest Complex.” 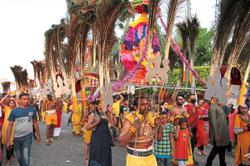