The dam was handed over to the state government from the Ministry of Environment and Water on Monday.

It was part of a strategic move to protect the interests of 631,250 registered water consumers in Penang until 2025.

“PBAPP will draw down the raw water reserves of Mengkuang Dam for treated water production at Sungai Dua Water Treatment Plant (WTP) during the annual dry seasons when the levels of Sungai Muda run low.

“More than 80% of the raw water that Penang needs daily is extracted from Sungai Muda at the Lahar Tiang intake, within Penang’s state boundaries.

“The raw water is abstracted from Sungai Muda and channelled via the 14km Sungai Dua Canal for treatment at Sungai Dua WTP.

“The level of Sungai Muda will run low during the annual dry seasons.

“When we cannot abstract sufficient raw water from Sungai Muda to maintain optimum production at the Sungai Dua WTP, the raw water supply will need to be supplemented by drawing down the reserves of Mengkuang Dam, ” he said in a statement yesterday.

Jaseni said this was a critical measure to guarantee sufficient water supply in Penang during the dry seasons.

“The raw water reserves of Mengkuang Dam serve as a strategic back-up of raw water supply during dry seasons.

“Having up to 73.5 billion litres of raw water in hand ensures Penang have sufficient raw water to cope with the dry seasons, ” he said, adding that Mengkuang Dam is now 91.4% full.

The handing-over ceremony was held at Mengkuang Dam on Monday.

Water infrastructure assets in Penang and many other states were transferred to the Federal Government in 2011.

The federal debts owed by these states for building these assets were then converted into lease payments. 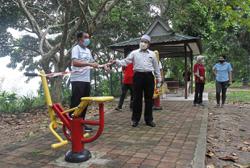