MPK to use wooden piles in reinforcing drains behind houses

Azman (right) explaining to resident Serjeet Singh that the land status needs to be determined before the concrete drain behind the houses can be rebuilt.

WOODEN piles can be used as temporary reinforcement behind 18 houses at Lintang Besi in Taman Melawis, Klang where an eroded earth drain caused cracks to house walls and water seepage.

Klang Municipal Council (MPK) Engineering Department (road and bridges section) engineer Azman Wahid said it was a practical solution as an immediate short-term remedial measure while the council waited for the required approval and budget to build a concrete U-drain.

“Verification of the status of the strip of land behind the houses will take weeks while the project approval and budget will take months, ” he said.

Azman added that if there were no hitches in the land status, the project could be slated for middle of next year.

On Oct 5, StarMetro reported that houseowners urged the council to upgrade the earth drain to a concrete U-drain, to overcome erosion behind their houses.

Complaints of erosion were lodged with MPK numerous times since the mid-1980s as houseowners had noticed that the original one-metre width of the earth drain had widened to 1.5m.

In 2004, residents in the area brought up the issue to MPK as the earth drain widened to a width of 3.5m.

The technical team installed a double stack of old motorcycle tyres to have the soil retained on-site and address the erosion but it was unsuccessful.

On Wednesday, Azman and two council assistant engineers Shaharin Jamali and Azary Adnan visited the site to get a first-hand understanding of the eroded earth drain.

Resident Ungku Aris Abdul Masjid, 73, said the gradual erosion of the earth drain affected the houses, with cracks that allowed water to seep into the back portion of their properties during floods.

“Our houses were built in 1969 with a scupper drain at the back, but it is now broken while some stretches are covered with earth.

“Surface run-off and water from the houses flow into the earth drain. “It has been like this for decades, ” he said.

Another resident, Darshan Kaur, 60, said the gradual erosion had caused cracks in her car porch.

“Worse still, water seeps into the living room through cracks along the wall’s skirting during rain.

“I have topped up the soil on the side of my house many times but water still rises up to the ankles along the outer wall, ” she said.

Resident Hazril Abdul Rahman, 50, said MPK’s suggestion to use wooden piles was practical to lessen the ongoing erosion to some extent as it would take time for the concrete U-drain project to start. 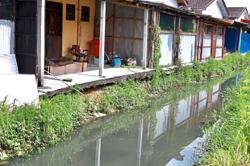