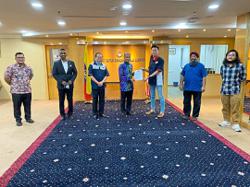 Nor Hisham waving goodbye to DBKL staff and well-wishers on his last day.

OUTGOING mayor Datuk Nor Hisham Ahmad Dahlan was given a fitting farewell at Kuala Lumpur City Hall (DBKL) headquarters yesterday as he clocked out for the last time.

DBKL staff and well-wishers who gathered to say goodbye to Kuala Lumpur’s 12th mayor, cheered as Nor Hisham gave his farewell speech.

“What I have accomplished over the past two years would not have been possible without your support.

“We (DBKL) might not always be liked for doing our job but we did it for the betterment of the people of Kuala Lumpur,” he added.

The visibly-moved 64-year-old civil servant hoped that DBKL staff would continue their efforts to make Kuala Lumpur a better city.

“We must strive to do our best in serving the people.

“I hope that all departments will step up and not work in silos,” he said.

Speaking to reporters, Nor Hisham said he was looking forward to a much-needed break.

“I want to be an ordinary man and continue serving the public,” he said, adding that he would miss engaging with stakeholders.

DBKL executive director Datuk Ibrahim Yusoff said that despite constant work pressure, Nor Hisham did not take out his frustrations on his staff.

“During his two years here, he did not raise his voice at us.

“He may look fierce but he has a sincere heart and is hardworking,” said Ibrahim.

Nor Hisham is seen as a no-nonsense, proactive mayor who preferred a hands-on approach and he quickly gained staff and residents’ confidence to become one of their favourite mayors.

He was often seen in his trademark chequered shirts whenever he went to the ground to investigate a complaint.

Appointed on Oct 1, 2018, Nor Hisham came with 40 years of experience in the civil service, having worked in various government agencies when he took on the role of Kuala Lumpur mayor.

He is the only mayor to have served under two different governments.

He is also the first civil servant in DBKL to take on a mayoral position, after getting the government’s offer to return and serve the country, one year into retirement.

He served as Subang Jaya Municipal Council (MPSJ) president prior to his retirement.

Not Hisham was accompanied by his wife Datin Rabithah Zakariah as they left DBKL headquarters.