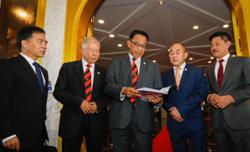 Rural roads such as this one in Ulu Baram district turns muddy during heavy rain.

MIRI: A total of RM1.2bil is being set aside to repair rural roads in northern Sarawak that often turn into rivers of mud during rainy days.

He told StarMetro that it was true that rural roads in Sarawak, such as those in the remote Baram district, were in very bad shape.

“Yes, we (state leaders) admit that our rural roads are in very bad condition.

“They are deteriorating year by year and every time it rains, there are big population of rural folk who are unable to travel out.

“The state is setting aside RM1.2bil just to repair these rural roads in northern Sarawak,” he said in an interview.

Gala is state assemblyman for Mulu and Parti Pesaka Bumiputra Bersatu division chief for his constituency.

He said the RM1.2bil will be handled by the Highland Development Authority (HDA).

The HDA is an agency under the State Planning Unit.

In response to why these rural roads woes in Sarawak had not been properly addressed over the years, Gala said they were mostly located inside timber logging areas.

“These rural roads inside timber concession regions are under the jurisdiction of the timber companies.

“They are supposed to repair and maintain these roads under the logging contract they signed with the state government.

“However, the firms have moved their operations further into the deeper zones.

“Roads in the areas they left behind end up neglected,” he said.Gala said the state government was serious in addressing the road woes facing the estimated one million rural population throughout Sarawak.

In his constituency, the rural roads are the main communication link for tens of thousands of people, he added.

Mulu is located about 200km inland from Miri.