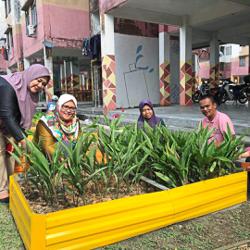 Dr Nurhusna (left, in yellow) giving some tips to the residents on how to improve their crops at the Kangkar Pulai Kenari Flats community farm.

Its residents committee chairman Rosli Othman said they were delighted and proud to be the only neighbourhood in Johor to be shortlisted in the award‘s high-rise category.

The flats, comprising 10 four-storey blocks with 600-odd residents, has been occupied since 1998 and this is the first time it has been shortlisted for any award, he said.

“I think our community farming project and compost-making efforts, which garnered the support and cooperation of the residents, were what got us shortlisted.

“We were pleasantly surprised when Iskandar Puteri City Council (MBIP) gave us the news.

Four judges from PLANMalaysia visited us to listen to our presentation, ” he said.

Rosli explained that its residents embarked on a small community farming project in December last year.

With the help of MBIP and Universiti Teknologi Malaysia (UTM), located nearby in Skudai, the project flourished into a garden.

He said the council and UTM have been supportive and provided resources and knowledge that helped their community farming project become more systematic and aesthetically-pleasing.

Rosli also thanked the Sultan Ibrahim Johor Foundation and Raja Zarith Sofiah Foundation for including the flats in their respective community pilot projects which in turn, motivated the residents to start the farming initiative.

He added that the garden, situated near Block A1, has a wide variety of flowers, vegetables, fruits and herbs such as banana, papaya, turmeric, ginger, ladies finger, spinach, ulam (edible flora) and chilli.

“Besides that, we also rear some chickens and use their droppings as fertiliser for the plants.

“Most of all, we are happy to see the commitment and strong community spirit among the residents who have come together to care and tend to the garden.

“The project served as an example and had a positive effect on others in the vicinity, with some starting their own farming project.

“We hope we impressed the panel of judges with our presentation and showed them how far we have come because before this, the plot of land was filled with undergrowth and lying idle, ” he said.

UTM School of Education senior lecturer Dr Nurhusna Abdul Wahid, whose team has been helping the community by imparting knowledge and manpower to enhance their efforts, said such initiatives have potential to bring the residents together for a common goal.

“The community’s response towards this project has been encouraging and we from UTM provided ideas and suggestions to improve on an already excellent effort.

“We also donated seedlings, equipment and fertiliser to the community to further help them in their efforts to expand the project in other blocks at the flats, ” said the lecturer who specialises in agriculture education. 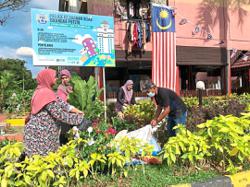