FRONTLINERS manning service counters at state agencies are now equipped with skills to offer support to people in distress.

The support system, known as the ‘First Support Points’, is part of the Penang Safe Family Policy in addressing domestic violence in the state. “We hope to set up the ‘first support points’ at all government service counters for victims to seek help.

“By using the existing resources such as government servants as the frontliners, there will be no additional costs involved.

“Posters will also be put up at the service counters so that the people will know about this extra ‘service’, ” she said at the workshop at Jen Hotel Penang.

Chong Eng said many victims did not want to make reports at the police station as they were afraid of others seeing them doing so.

“It is easier for them to seek help at the district offices where they settle their dues or at the local councils where they pay bills.”

She said Penang police recorded a total of 343 domestic violence cases in the state last year.

“There were 33 cases reported during the movement control order period.

“We believe there are still many cases that went unreported, ” she noted.

Chong Eng said those who had completed training could start providing services to the people.

“Officers at the ‘first support points’ would first understand the victims’ problems.

‘If the victims are physically hurt, they will be sent to government hospital or clinic for treatment.

“If they are found to be abused domestically, then the doctor must make a report.

“If they are keen, they may also be referred to the Women’s Centre for Change for further support.

“If the case is life-threatening, the police or Welfare Department will help apply for an Interim Protection Order or an emergency protection order, ” she said.

Chong Eng said the second batch of training would involve representatives from the service centres of state assemblymen and MPs.

She said 10 non-governmental organisations and several religious organisations in Penang were also keen on supporting the policy.

Chong Eng also said the Penang Women’s Development Corporation (PWDC) had recently launched a new department for family and children affairs that would be fully operational next year.

“We will be applying for a RM1mil allocation from the state government to support the new department and other related projects, ” she said. 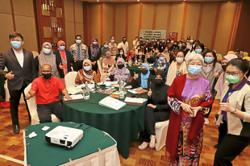