A resident picking up rubbish and plastic bottles during the gotong-royong at the area surrounding Taman Kem low-cost flats in Port Klang.

MPK COB director Hani Suryati Abd Rahman said around 80 residents participated in the half-day event that began at 8am and ended at 12.30pm.

“People came together to clean and remove rubbish dumped at road corners.

“Old tyres, plastic buckets and broken furniture left outside the flats were carted off,” said Hani.

“We wanted to ensure that the immediate surroundings of the flats were not potential Aedes mosquito breeding sites.

“Two lorry loads of rubbish were removed from the area.”

She added that residents were taught to identify breeding sites around the flats and eliminate areas of stagnant water where plastic bottles were strewn around.

Councillor for the area M. Puspavali said the activity was timely in view of the dengue situation in Port Klang, where 563 confirmed dengue cases had been recorded from January to Sept 13.

Puspavali added that Taman Kem flats was chosen as the gotong-royong venue because there had been a number of dengue cases reported in the area.

MPK president Dr Ahmad Fadzli Ahmad Tajuddin, who was present at the event, said the council hoped to increase public awareness on the importance of dengue prevention within their surroundings in order to make the residential area safer for everyone. 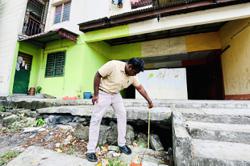