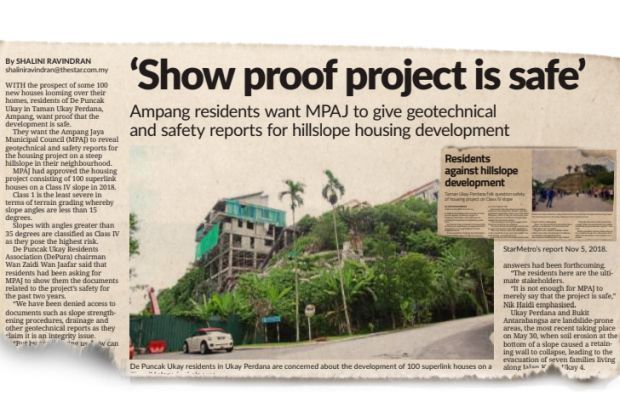 SLOPE strengthening and stabilisation works are being carried out to ensure the safety of a housing project on a steep hillslope in Taman Ukay Perdana, Ampang.

Ampang Jaya Municipal Council (MPAJ) said that they had approved the plan in 2000 for the development as a whole in Ukay Perdana.

“Applications for earthworks as well as road and drainage plans for 252 units of two-and-a-half storey terrace houses were approved by MPAJ in 2004.

“The current phase of development involves the construction of super structures and slope strengthening as foundation works using ‘micro filling’ had been completed, ” MPAJ said in a statement.

The municipal council was responding to the StarMetro’s report on Sept 3, “Show proof project is safe” highlighting residents’ concerns over the construction of superlink houses being built on a Class IV slope.

Class 1 is the least severe in terms of terrain grading whereby slope angles are less than 15 degrees.

Residents of De Puncak Ukay had requested that MPAJ reveal geotechnical and safety reports for the housing project taking place in their neighbourhood.

MPAJ said in the statement that the construction site was a “distribute slope” area that required slope stabilisation works which are currently being carried out by the developer.

“The developer is using the soil nailing method to cover the surface of the slope with a layer of concrete.

“This method will serve as an additional reinforcement measure to the slope strengthening works that had been carried out previously on the site, ” it explained.

MPAJ added that all phases of development were being carried out on site by the developer under the supervision of certified engineers.

An online petition against the new hillslope project was initiated two weeks ago by concerned residents.

At press time, almost 2,300 people had signed the “We Don’t Want Another Landslide In Ulu Klang” petition addressed to MPAJ and Ampang MP Zuraida Kamarudin. 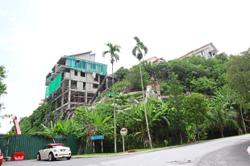