Nik Mohd monitoring works to replace overhead electrical cables and lamps that were not in working order at Jalan Kota in Klang. — RAJA FAISAL HISHAN/ The Star

WORK has begun at several commercial and main thoroughfares in Klang to fix the problem of non-functioning street lights.

“Our electrical infrastructure has become the target of unscrupulous people who are out to make a quick buck by ripping out underground cables and smashing open electrical junction boxes for copper fittings. Such acts of vandalism put the lives of all road users at risk, ” he said.

Zamri added that because of this, MPK had decided to have the new electrical wiring run overhead instead of underground.

On Aug 29, StarMetro, reported that motorists and residents had had enough of faulty street lights and wanted the authorities to respond efficiently to complaints.

Contractor in-charge of rectification works, Rasidin Din Enterprise supervisor Nik Mohd Zulfikha, 31, said work to replace the overhead electrical wiring is going smoothly with the use of a skylift truck.

“Our workers have completed the wiring at the Jalan Cassia Utama and Jalan Jasmine stretch in Bandar Botanic. We are now waiting for 35 units of 250 watt lamps to be delivered so we can instal them, ” he said.

Zamri said MPK has an annual budget of RM3.2mil to ensure all municipal council street lights are in working order.

Klang MCA Youth chief Datuk BK Tan said he had visited the sites in Bandar Botanic and Jalan Dato Hamzah to check on the repairs.

“We will monitor the progress of the project to ensure that the council fixes all the street lights that are not working, ” he said.

Tan added he was pleased to see work had begun on the first phase of the street light rectification project. 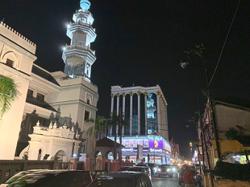 Parts of neighbourhood in pitch dark for over six weeks