A hotel in Klang was fully booked during the weekend as locals checked in after hearing that the water problem would last four days.

RESIDENTS in Kuala Lumpur and Selangor found themselves trapped in a predicament when taps in most parts of the Klang Valley went dry on Thursday.

To deal with the suddenness of the situation due to water pollution in Sungai Selangor, some people opted for staycations while others chose to stay at hotels close to their homes.

Many made the spur-of-the-moment decision on Friday evening when news reports said that it would take at least four days for water supply to resume.

“I was livid when I read that the water cut might last four days. What were we supposed to do during that time,” Puchong resident M. Viknendran said.

“Our tanks were empty and most of the restaurants as well as coffeeshops in our neighborhood were closed.

“I was sceptical about the cleanliness of the eateries that were open.

“So my wife and I decided to get out of town for the weekend and enjoy ourselves, away from the water situation stress.

“We decided on Janda Baik in Bentong because we wanted somewhere that was cool and close to nature where water was not an issue.

Jayalakshmi, who lives with her parents, sister and two-year-old son, said they ran out of water by the second day of the water cut.

“We could not find bottled water as shops had run out of stock.

“I have aged parents and there was no water to wash my son’s milk bottles and other necessities,” she said, elaborating that the situation forced the family to make an impromptu decision for a weekend getaway.

“We managed to book two reasonably priced hotel rooms, so we are treating this as an unplanned ‘vacation’,” she added.

Shamini Store, who lives in a condominium in Damansara Heights with her daughter, decided to book a room in a nearby hotel on Saturday.

“The hotel was already fully booked on Friday and on Saturday morning we still had no water in our area.

“But I was lucky to get a room on Saturday. Our taps were completely dry so I could not cook and I did not want to buy outside food.’’

K. Radhika from Klang booked her family of six into a hotel on Friday night.

“I live 20 minutes away but there was not a single drop of water in the house for our basic hygiene needs,” said Radhika.

She said the hotel where her family stayed was packed with guests.

“Families were coming in with their children, dressed in pajamas, after 9pm, probably after finding out that the water cut would be for a few days,” she said, adding that the hotel was fully booked until Sunday.

A. Saraswathi, 67, from Shah Alam and her family also decided to book a room at a hotel close by.

“We have not showered. I have a six-month-old granddaughter to take care of and we have no water to wash her milk bottles,” she said.

“I share a condominium with some friends and we were struggling with dry taps, so I decided

to visit my grandmother,” she said.

Similarly, Kala Devi, an insurance agent from Bangsar, decided to spend the weekend at her friend’s place in Bentong to escape the stress.

“I can deal with it if there is no electricity but it is just too stressful when there is no water,” added Kala.

Many of those who left Klang Valley to escape the water woes, decided to stay away until Sunday despite finding out that water had been restored in their homes.

“My neighbour informed me that the water supply resumed on Saturday evening but I am quite happy to be taking this break,” added Viknendran. A hotel in Klang was fully booked during the weekend as locals checked in after hearing that the water problem would last four days.

A resort in Janda Baik in Bentong, Pahang saw a spike in visitors during the recent water disruption.

Rest areas in Janda Baik Pahang are packed with people as they head out of Kuala Lumpur and Selangor over the weekend.

Viknendran and his wife went to Janda Baik to escape the stress of having to deal with dry taps.

Saraswathi looking after her granddaughter while her children check the family into a hotel.

Many Klang Valley folk headed out, over the weekend, to resorts like this one in Janda Baik to escape stressing over the dry taps in their homes. 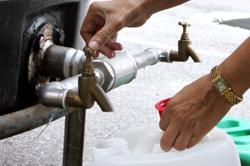 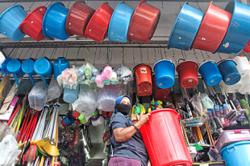