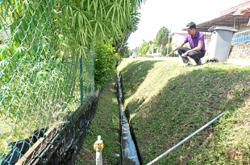 Nur Hanani picking up floor tiles in a bedroom of her house that came loose.

JOHOR BARU: What was supposed to be her dream house became a nightmare for Nur Hanani Mohd Yazid when the walls and flooring of her home in Taman Pulai Hijauan here began showing cracks as soon as she moved in.

The 31-year-old executive said the defects on the wall, roof and floor of her unit became increasingly apparent in 2018, two years after moving in.

The mother of two added that there were also cracks on the exterior of her house, causing the walls inside the unit to become wet and mouldy.

“My family and I are forced to live with severe leakage and cracked floor tiles. I do not even let my young children play upstairs for fear they will get hurt.

“It is frustrating and heartbreaking because the quality of the house is not up to our expectations, ” she said, adding that the unit cost RM500,000.

Nur Hanani was among 300 homeowners in Taman Pulai Hijauan here who faced the same plight, and are appealing to the state government to step in and resolve the problem.

The residents association chairman Loo Mei Yin said the homeowners had suffered from similar defects, some for more than four years since moving in.

Now that the two-year defect liability period was over, she said the damage had become more apparent despite the developer’s initial efforts to repair the defects.

“We contacted the developer but the discussions were not favourable, ” she said, adding that the association then sought the help of Kota Iskandar assemblyman Dzulkefly Ahmad.

Dzulkefly said initially he had arranged a meeting with the developer and the residents association to meet with state housing and local government committee chairman Ayub Jamil in mid-July and subsequently on Aug 3, but the developer failed to turn up for both meetings.

When contacted, Ayub said he had visited some of the affected houses with the Johor state secretary’s office housing department officers and building surveyors from the Royal Institution of Surveyors Malaysia (RISM).

He said the defects were quite obvious and that he had asked RISM to conduct a forensic study to assess the damages.

“If the matter is left unresolved, it will be brought to the housing tribunal, which is also under the purview of my committee.

“And if all else fails, the residents can take legal action, ” he said.