The Shah Alam Community Forest has a picturesque lake. According to the Shah Alam Local Draft Plan 2035, a proposed road will cut through this forest.

NUMEROUS objections have been filed by residents against the proposal for a road that will cut through the Shah Alam Community Forest.

The proposed road will cut through the forest to connect Setia Alam to Section U10, as laid out in the Shah Alam Local Draft Plan 2035 which is now open for public viewing until Aug 26.

The land which the road is to be built on belongs to Selangor government.

Residents are upset over the road proposal as it will mean losing their only green lung in the vicinity.

Shah Alam Community Forest Society (SACFS) founder and secretary Alicia Teoh said the community forest was actually an attraction as people from everywhere in the Klang Valley came every week to hike the trails.

“If the road is built then we will lose our green lung and beautiful rainforest.” SACFS has put up a map of the trails they made for the benefit of visitors to the community forest.

The total forest size is about 172ha. The state government owns an estimated 52ha. The rest belongs to PKNS.

The community forest is largely within state land.

Teoh and other hikers along with some residents first explored the forest about six years ago and soon started building trails to make it easier for people to hike.

“It was just a bunch of us with a few gardening tools to roughly clear a path to set out trails.

“We mapped the trails and displayed it for the benefit of visitors, ” she related.

She said this attracted trail groups, avid hikers and mountain bikers who made new trails.

Based on the local draft plan, the proposed road will cut through a pristine part of the forest which is home to a variety of flora and fauna.

“Our society has been trying for years now to get this community forest gazetted as a green lung. Teoh (front right, in green) with some of SACFS past and present members at a gathering before the movement control order. The society has been fighting to get their green lung gazetted as a forest reserve.

“We have also worked with the Kota Damansara Community Forest group to learn how to maintain and care for a forest, ” Teoh added.

Last year, SACFS had a meeting with the state government and other relevant parties to discuss gazetting the Shah Alam Community Forest as a green lung.

However, the society was told this portion of land had been zoned for the use of a cemetery and that a road would be built there.“Now that the local draft plan is out, we have been getting as many residents as possible to put in an objection. Many have submitted their objections online, ” said Teoh.

She said that without this community forest in Shah Alam, the other closest forests for residents living in the state capital city would be the ones in Puchong and Kota Damansara.

Residents are also worried that if the proposed road is approved, more than 100 trees in the forest will likely have to be chopped down to make way for the construction.

“It will really be a shame to see it all go because this forest has also been used as a teaching and learning zone for students from primary school all the way to university level.”

She highlighted that wildlife such as the endangered tapir, gibbons and other reptiles would lose their home. A picture of the Painted Bronzeback from herping enthusiast Wong, who saw the snake on a night walk in the forest.

When contacted, herping enthusiast Steven Wong said he had seen quite a number of lizards, snakes and frogs during his hikes through Shah Alam Community Forest.

He has hosted a few night walks at the forest under the Malaysian Nature Society’s Herpetofauna Special Interest Group.

“This forest is already a small patch now and if it gets deforested further or developed then these species will have to look for new places to live.

“As forests are cleared, snakes will be forced to enter the human environment. Some will be able to adapt to life outside a forest but many other species will perish, ” he said.

He had identified more than eight different species of snakes at the Shah Alam Community Forest, including the Common Wolf Snake, Reticulated Python and Sumatran Spitting Cobra.

Environmental lecturer Dr Teckwyn Lim proposed another way to build the road in a bid to save the forest and its wildlife.

“If the road has to be built, then the authorities should consider a tunnel under the forest to reduce impact on the green lung.

“Building a road through the forest can threaten the wildlife there. 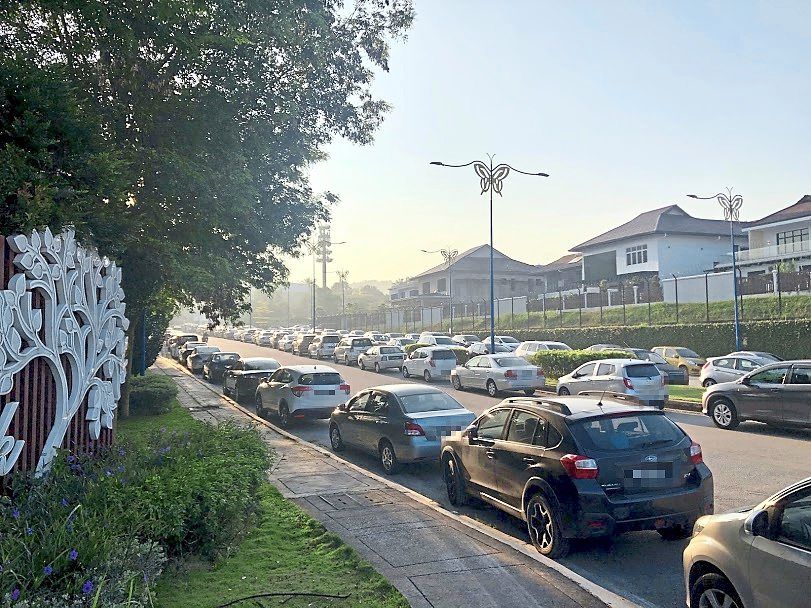 A high number of vehicles parked on both sides of the road near the Shah Alam Community Forest every weekend.

“If the forest is destroyed, these animals will have nowhere to go but into residential houses and some will end up being roadkill, ” said Lim, who is also a committee member of SACFS.

According to residents, the Persiaran Mokhtar Dahari nearby is already a spot where roadkill is frequently found, including tapir.

When contacted, Shah Alam City (MBSA) councillor Simon Siow said the road would be built on state government reserve land and the project had been approved by MBSA.“The 1km-long road will be built by the developer of Bandar NusaRhu.”

He said the government land was never intended for a community forest.

Siow agreed that while exercise was good, the amount of traffic from visitors to the forest caused congestion in the area.

“Vehicles are parked along the roads, reducing the two-lane road into one lane in each direction.

“The cars are parked on the roadside stretching from Jalan Setia Duta U13/23 right up to the main road of Persiaran Setia Perdana.

“One weekend when I was in the area, I saw enforcement officers issuing compounds, ” he said, adding that the application for the road project was received in 2016 and the planning permit as well as engineering plan had only been recently approved.