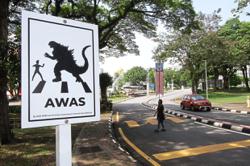 THE next time you use pedestrian traffic lights at a zebra crossing, appreciate the fact that it may have cost the government as much as several hundred thousand ringgit to set it up.

The traffic lights themselves are not expensive, but the construction cost, the laying of power cables which involves earthworks can require a large budget, said Penang public works committee chairman Zairil Khir Johari.

“If the location of the pedestrian traffic lights is far from the power source, then the lights will really cost taxpayers.

“The trench must be dug deep enough so that the cables will not be harmed by any activity on the surface.

“There must also be a metering system for the power consumpt-ion, so that Tenaga Nasional Berhad can charge the state.

“After the cables are laid, the road needs to be resurfaced. We are stringent about the quality standards of the resurfacing because we must make sure the traffic lights will never fail pedestrians, ” Zairil explained.

He said for example, the pedestrian traffic lights and zebra crossing in Tanjung Bungah near the floating mosque had cost several hundred thousand ringgit.

The one in Pangkor Road near Gleneagles Penang cost about RM100,000.

In developed countries such as the United Kingdom, Japan and Australia, Zairil pointed out that there were ample evidence motorists could be guided to give pedestrians the right-of-way at a zebra crossing.

“It is really the law in Malaysia too. At a zebra crossing with traffic lights, motorists must stop when they see someone waiting to cross, ” he stressed.

As for the zigzag lines marking six zebra crossings on the island, Zairil said in many countries, it was the law to never park on zigzag lines, never overtake another car or change lanes within them.

“This ensures maximum safety for pedestrians, something which we must adopt too, ” he said.

He said the state would continue to hold public awareness campaigns to get Penang motorists to understand the need to be heedful towards pedestrians.