(From left) Rosli, Prof Shukri, Dr Zaini and Nor Hisham at the MOU signing ceremony.

THE Management and Science University (MSU) is the first varsity to participate in a pioneer project in relation to the construction of the National River Trails (Denai Sungai Nasional).

To kick-start a smart partnership for smooth implementation of the project, MSU has signed a memorandum of understanding (MOU) with the Drainage and Irrigation Department (DID) in the academic and research field.

With the agreement, MSU has officially undertaken the task of building trails along Sungai Damansara under its corporate social responsibility initiative, which will cover research on river water quality, river education, planting of trees, and landscaping based on nature-based material to ensure sustainability of environment.

Speaking to reporters later, Prof Shukri said MSU was proud to be the first university to participate in the project that would contribute to environmental sustainability, especially rivers.

“We want to be part of the move to change the mindset and culture of the students and the university’s workforce on sustainability of the environment for the benefit of communities and the country,” he said, adding that phase one of the project started three years ago.

In his speech at the signing ceremony held at MSU Performing Arts Theatre in Shah Alam, Prof Shukri said environmental sustainability was one of the main pillars of the varsity in support of the United Nation’s Sustainable Development Goals (SDGs).

“We can move forward to support our ideas and provide the right platform for this. We want to create holistic and well-rounded students in terms of skills and mindset.

“We want them to show concern for the environment,” he added.

Dr Zaini said the ministry was cooperating with MSU as the varsity was proactive and had shown interest by first registering with them for the project in addition to its location beside a river.

He said the government had allocated RM50mil under the economic stimulus package for environment sustainability, which included initial works for the construction of the National River Trails.

He highlighted that the country’s National River Trails project aimed to cover 10,000km by 2030.

“We already have a policy to build river trails, and will discuss more for the implementation of this policy,” he added.

Dr Zaini said the construction of river trails would be ideal to solve river pollution problems.

“The trails will allow the people to be closer to the river.”

He noted that the trails could also contribute to a healthy lifestyle and ecotourism.

He said those who enjoyed river trails would be able to take part in community activities such as collecting rubbish and planting trees in the area, as well as contribute to the sustainability of the river’s ecosystem.

He expressed hope that the private sector and non-governmental organisations would contribute further for the funding of the National River Trails nationwide.

Dr Zaini cited the US, UK, Japan and Singapore in relation to implementation of such trails.

“For instance, US National Trails –- The National Strategy for a Sustainable Trail System was announced in February 2018 involving 158,600 miles of motorised and non-motorised trails.

“In the US, 84 million people recreate on National Forest System trails and 143,000 jobs annually, supported by recreation and tourism spending, and they received more than US$9bil in annual visitor spending,” he said.

Malaysia, said Dr Zaini, was using the “river trails” and “non-river trails” concept, and that there were opportunities for economic and social gain.

“The rivers are beautiful, but urbanisation has caused a lot of changes.

“The government cannot act alone, and we need everybody’s participation,” he added. 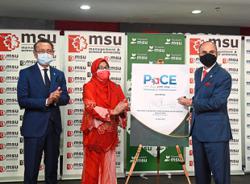