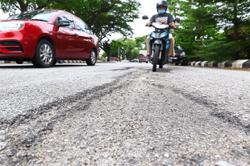 Although it will be some time before the access road that links Kampung Johan Setia in Klang to the Shah Alam Expressway (Kesas) is reopened, water supply has been restored a few days after a sinkhole formed in the area.

On July 20, it was reported that a sinkhole, at the intersection of Jalan Langat (Banting-bound) and Jalan Johan Setia, appeared during a boring activity for the Light Rail Transit 3 (LRT3) project.

In addition, an unscheduled water disruption occurred in about 10 areas in Klang and Kuala Langat, because of a burst pipe at the same sinkhole site.

“We were caught off guard when there was no water supply, but only realised how serious the sinkhole problem was when we saw a lot of heavy machinery at the site.” Aminah says residents only realised how serious the sinkhole problem was when they saw a lot of heavy machinery at the site.

“Although water supply has resumed, I still keep a tank of water at my stall just in case, ” said the Kampung Johan Setia resident of more than 15 years.

“My business has been badly affected because the access point to the highway has been cut off. The only people who patronise my stall these days are the construction workers.”

Siti Norain Mustafa said she had to shut her business for two days, as her drinks stall relied on sufficient supply of clean water.

“Many residents here, including my parents, are complaining about how difficult it is now to go to Banting and Klang.

“Where it used to take us less than five minutes to exit Jalan Johan Setia, now it takes us an extra 20 minutes to take an alternative route to get to Banting or Klang, ” she added.

The 26-year-old who was born and bred in Kampung Johan Setia, said this was the first time a sinkhole had occurred in her neighbourhood.

Though they felt unsafe, Siti Norain said her family would have to put up with the inconvenience for the next few weeks and hoped that the authorities would fix the sinkhole soon.

Salina Ahmad, 45, said her family of 10 had to put up with regular water disruption for some time because of the ageing pipes in the village.

“My house is in an older part of the village, which experiences water disruptions more often compared to newer developments, ” she added.

“The disruption happens at least twice a month because of the construction or utility works here.”

Even though she has some water stored at home, Salina said it was only sufficient for cooking and light cleaning.

“It is very inconvenient for my family, especially for my schoolgoing children.

“We sometimes have to bathe with murky water and buy mineral water for cooking, ” said Salina, who has six children aged between 12 and 23.

Pengurusan Air Selangor Sdn Bhd said in a statement last Thursday that the unscheduled water supply disruption in Klang and Kuala Langat had been fully restored.

Meanwhile, MRCBGK said in a statement that the short stretch along Jalan Langat (Klang- and Banting-bound) that had been fully closed to facilitate sinkhole repairs had been partially reopened, with a contra-flow system implemented near Jalan Johan Setia intersection.

One lane will be made available to light vehicles only for each direction, while heavy vehicles will be diverted to Kesas and South Klang Valley Expressway (SKVE). 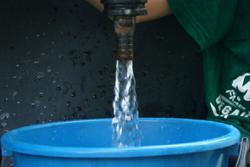