Two vegetable stalls and one selling chicken being sealed for allowing foreigners to man them during the early morning operation at Pasar Besar Jalan Othman in Petaling Jaya.

The business licence of the three traders would also be revoked by Petaling Jaya City Council (MBPJ) for violating rules barring foreigners from working at the market.

The city council’s health and enforcement team also confiscated items from seven other stalls for placing them beyond the permitted space and obstructing the walkway.

Petaling Jaya mayor Datuk Mohd Sayuthi Bakar told StarMetro that the city council would no longer be lenient with the traders as ample warnings had been given.

“We sealed two vegetable stalls as well as one chicken stall.

“These sealed stalls have been using foreign workers and we are going to revoke their business licence too.

“In addition, we also confiscated racks and other items from seven stalls as they were trading from spaces beyond what was allocated to them, ” he said.

Sayuthi said such raids would be carried out regularly to put an end to unscrupulous trading practices.

“We won’t be lenient anymore. Those engaging foreign workers will lose their business licence, ” he said.

The mayor also said MBPJ would be making an announcement on these soon-to-be vacant stalls so others could apply to run them.

“We will be transparent with vacant lots.

“Those interested in doing business at the market can apply for a lot, ” he added.

Pasar Besar Jalan Othman was closed for over a month in May when a few traders tested positive for Covid-19.

When the Petaling Jaya Old Town area was placed under enhanced movement control order (MCO), about 200 illegal foreign workers were rounded up during an operation. 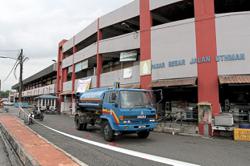