THE popular Telok Kemang beach in Port Dickson, Negri Sembilan, is abuzz with visitors once again.

After almost three months of inactivity when interstate travel was banned due to the movement control order (MCO), the beach was reopened to the public on June 13.

A check by StarMetro last weekend revealed hundreds of visitors soaking up the sun.

However, social distancing did not seem to be a priority among most of them.

Many were taking shelter from the blazing sun under large blue tents that are a common but unwelcome sight to some at Telok Kemang beach.

Although the authorities had carried out an operation last month against tent operators who were found to be flouting the MCO rules, they seem to be back in greater numbers.

Risky business: These makeshift tents along Telok Kemang provide shelter from the scorching heat but some visitors complain that they also prevent them from enjoying the view. — FARID WAHAB/The Star

Abu Hassan Shamsuddin, who came with his family of six from Bahau, Negri Sembilan, said the tents were a nuisance. “They obstruct others and block our view, ” said the 43-year-old lorry driver.

He added that the tents should not be allowed so close to the water as they spoiled people’s enjoyment of the beach.

One of the tent operators Muhd Hafiz Md Idris, 30, said it cost RM50 to rent one tent for a day.

“We are only allowed to assemble the tent if there are customers wanting to rent them, ” he said.

In a statement on its social media page, MPPD said 30 steel tents, two wooden ones and several others that were in a state of disrepair were removed from the beach.

The council reminded operators that they could only set up tents upon request from customers and they should not be left on the beach when not in use.

Eateries at Telok Kemang were brimming with diners last weekend.

It also reminded operators to ensure a distance of 1.5m between tents and to take the body temperature and details of those renting the tents as well as sanitise the equipment after every use.

“I have been told by visitors that with the absence of the tents, they are able to enjoy their time on the beach.

“Adults are able to keep watch over their children better too, ” he said.

People were seen shopping at scores of stalls and shops selling clothes, swimwear and souvenirs while restaurants were brimming with diners.MPPD said jogging and cycling were permitted at public beaches in Port Dickson but a picnic group must not exceed 10 people.

Visitors must maintain a distance of between 1m and 3m.

While the high number of visitors may spell good news for local tourism operators, others are worried about crowded beaches and the lack of social distancing. 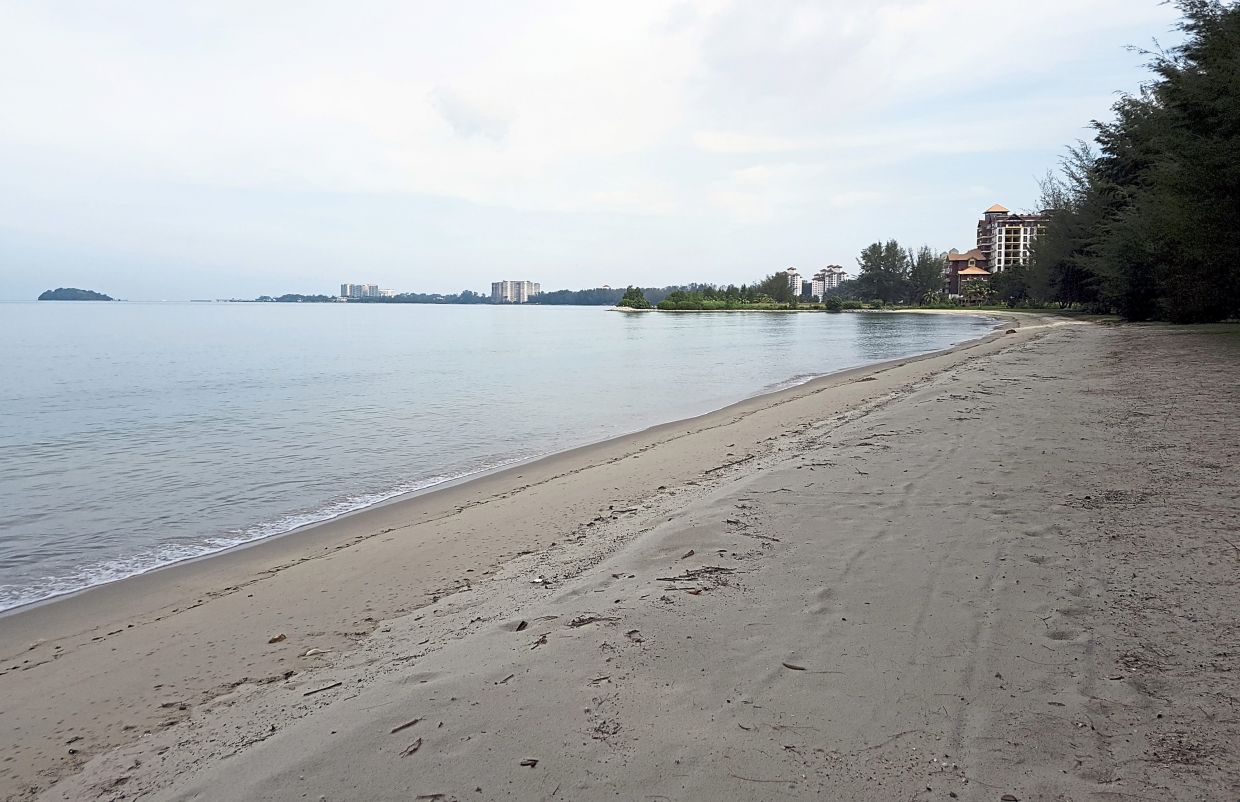 A section of the deserted Telok Kemang beach during the MCO in May and the scene at the beach last weekend (below).

“With a crowd of this size, everyone must take measures to protect themselves and others, as a new cluster can easily form, ” said Azhar who stayed in Port Dickson for two nights.

He however, welcomed the decision to allow activities to resume at the beach.

“Those employed in the tourism and service sectors were badly affected by the MCO.

“Now that the beach is open again, hopefully it will stimulate the local economy, ” he added.

Kenny Lim, 51, from Puchong said the local authority should limit the number of visitors to the beach.

“Maybe they can set a maximum number of visitors at any given time and limit access once that number is reached, ” he said.

Siti Nur Azrin Zainal Abidin, 39, who came with her 12-year-old daughter and husband from Segamat, Johor, said she was surprised to see such a large crowd at the beach.

“We did not expect so many people. We wanted to spend

some time together as a family before school reopens, ” she said.

Ice-cream seller Ahmad Asyraf Kamal Ariffin, 19, said the number of visitors would only surge on weekends.

Norhayati Sulong, 55, said the large crowd made up for her loss of income during the MCO.

“I see more visitors as people cannot holiday outside the country, ” said the petty trader who sells T-shirts and hats at the beach.

She was glad that MPPD had given the green light for stalls to reopen.

“I open my stall on weekends only from 8.30am to 7pm because that is when the crowd comes, ” she said.