KUANTAN: The Bunut Rendang fishermen’s resettlement project has finally been completed after a long delay.

Mentri Besar Datuk Seri Wan Rosdy Wan Ismail said the state government has never given up on it and continued to look for ways to finish the project.

The project was finally completed thanks to cooperation from various state and federal departments and agencies.

“The resettlement programme is among the government’s efforts to help underprivileged fishermen own homes in a safe environment complete with quality facilities.

“The government has agreed for the project to be categorised as low-cost housing so that the residents can get various benefits such as getting a house at an affordable price, exemption from stamp duty tax and low deposit for electricity and water meters,” said Wan Rosdy after attending the handover ceremony here.

Wan Rosdy also thanked Agrobank for facilitating loans up to 110% for the houses worth RM35,000 each.

On why the project stayed dormant for such an extended period, Wan Rosdy said although there were several reasons, it was time to look forward and solve problems.

He said the government

did not want to be hasty in taking action against developers because there could be factors outside their control causing delays such as weather or soil conditions.

“However, if it is due to their own fault or they intentionally delay it, then the state government will surely take action because it affects the people,” said Wan Rosdy.

The first phase of the project developed by YYM Builders Sdn Bhd involved the construction of 154 units of three-room houses on 18ha land. 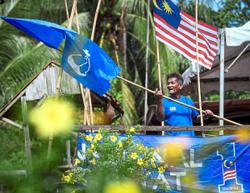