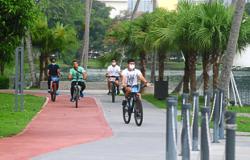 For a long time, traders in Pasar Besar Jalan Othman have been paying their rent to a middleman.

However, the way the city’s biggest and oldest market was being run left a lot to be desired.

The three-storey Pasar Besar Jalan Othman in Petaling Jaya which was built in the 1980s, has about 516 business lots.

Due to poor maintenance and upkeep, the building was in a dilapidated state and even had a rat infestation recently.

After several Covid-19 cases were detected last month, the market was closed temporarily and only reopened on June 5.

MBPJ took the opportunity of its closure to conduct repairs to the structure which is still ongoing, but no one knows the scope of the work being carried out and how much it costs.

The way rental was being collected at the market was also questionable.

A source said the city council never drew up a proper agreement with traders on how payment was to be managed. This allowed a middleman to fill the vacuum and collect the rental. The PJ Old Town market has been in the news for all the wrong reasons, including a recent infestation by rats. — Photos: YAP CHEE HONG, SAM THAM and ART CHEN/The Star

A source said that while the rental was only RM80 and RM120 monthly, the trading lots were being sublet, including to foreigners, at a much higher rent.

“This happened as many of the original tenants were no longer doing business, ” said the source.

MyPj, a coalition of Petaling Jaya Residents Associations and Rukun Tetangga, had launched an online petition, urging MBPJ to set new standards for the oldest market in the city.

MyPJ chairman Jeffrey Phang said the rent collected should go towards improving the market, including better management and maintenance.

“Based on rough estimates, the market could collect about RM500,000 a year.

“This money should have been used to upkeep and maintain the market to provide a better environment for its customers and workers, ” he said. Phang says rental collected from PJ Old Town market traders should have been used to maintain the facility.

Phang said it was shameful that an essential public amenity such as the Old Town market was in such a bad state.

“The market should be well-managed as that would help local businesses in the surrounding area too, ” he said, adding that despite its shortcomings, the market was popular with locals.

MyPJ member Esham Salam said the Housing and Local Government Ministry should have a uniform standard that all markets in the country should adhere to.

“This would ensure minimum health, safety and hygiene needs are met.

“MyPJ calls upon the ministry, local councils, Standards Institute of Malaysia and professional institutions representing architects and engineers to work together to make this a reality, ” he said.

Esham added that the deplorable conditions at the market was a result of poor management by MBPJ.

“The market was in a bad shape due to the failure of MBPJ to manage its assets. The management needs to improve.

“I believe that can only happen if there is action from the mayor, ” he said.

“I have nothing against them but only when the market is entirely run by locals, will it see some improvement in aspects like cleanliness, ” he said. Esham says the Housing and Local Government Ministry must have a minimum standard for all markets in the country.

Petaling Jaya Section 5 Residents Association president Ben Thompson said residents were told that it was the traders who were refusing to move out of the market, hindering renovations and repairs from being carried out.

“This is hard to believe as MBPJ had the power to ensure it happened.

“It took a pandemic for the market to be finally shut down and repairs to be carried out, ” he said, adding that he hoped the changes were more than cosmetic.

Thompson pointed out that the Section 17 market was well-maintained.

“We would be happy if the same standards could be applied to the Old Town market.

“We are sure that more locals would be willing to work in the market if these standards were in place, ” he said.

When contacted, Petaling Jaya councillor Suraise Gengiah said MBPJ would be introducing the thumbprint system to ensure only locals operate in the market.

“The city council would improve the market in stages, ” he said.

Diploma holder among those seeking job at market

All’s not well on first day of facility’s reopening 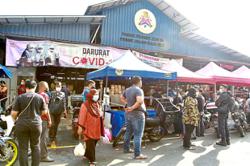