Much-needed works: A board detailing the three-month closure is visible at Central Market’s entrance. The 132-year-old tourist site in Kuala Lumpur will be closed for an upgrading project, which includes the resurfacing of carpark facilities, repainting and improving electrical systems in the building. — ART CHEN/The Star

The management of the 132-year-old building said it was taking the opportunity during the current economic downturn to carry out much-needed upgrading works, including repainting and renovations.

“This is the best time to do it and work can be carried out to save on overtime cost, ” said a management spokesman.

“It is not a major upgrade like the one we did 10 years ago. It will just be basic work, ” she explained.

Central Market is a gazetted heritage building under the National Heritage Act 2005.

Any upgrade and repairs require the National Heritage Department’s permission as well as a permit from Kuala Lumpur City Hall (DBKL).

“We are careful with the extent of the upgrades that will be done, due to it being a heritage building, ” said the spokesman.

“Even the paint will be the same colour.”

The closure starting yesterday, of the popular tourist site known as Pasar Seni came as a surprise to visitors.

“There is a lot of negative perception that we are closing due to the current situation, but I would like to clear the air and emphasise that we are merely taking this opportunity to carry out some much-needed upgrading work, ” the spokesman reiterated.

The work will involve resurfacing and upgrading of carpark facilities, repainting and improving mechanical and electrical systems in the building.

The spokesman said Central Market’s tenants had been notified of the upgrading project.

Professional tourist guide Jane Rai said she received notice of the closure via email on May 29.

“I heard of the closure from tenants, and this was confirmed when I got the email.

“It is a good thing that the place is being repainted as it is starting to look a bit dull.

“Central Market is a wonderful place and we are certainly looking forward to starting our tours again and bringing people to visit it, ” added Jane.

The management announced online yesterday that it was closing for three months from June 1 to Aug 31.

However, Central Market Annexe will be open for business as usual except the galleries which are closed due to the movement control order.

The building underwent massive renovations in 2010.

Central Market was built in 1888 by Yap Ah Loy and started as a wet market before it evolved over the years to become a one-stop centre for Malaysian batik, souvenirs, collectables and handicraft. 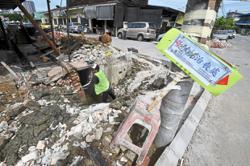