WORRYING for the health and safety of patrons has prevented some food operators from fully resuming their business.

These operators have remained apprehensive in providing dine-in services despite being allowed to do so starting yesterday.

A check by The Star showed that several popular food courts in Penang were still closed while most outlet operators still preferred accepting takeaway orders only.

“We should not take the coronavirus lightly. 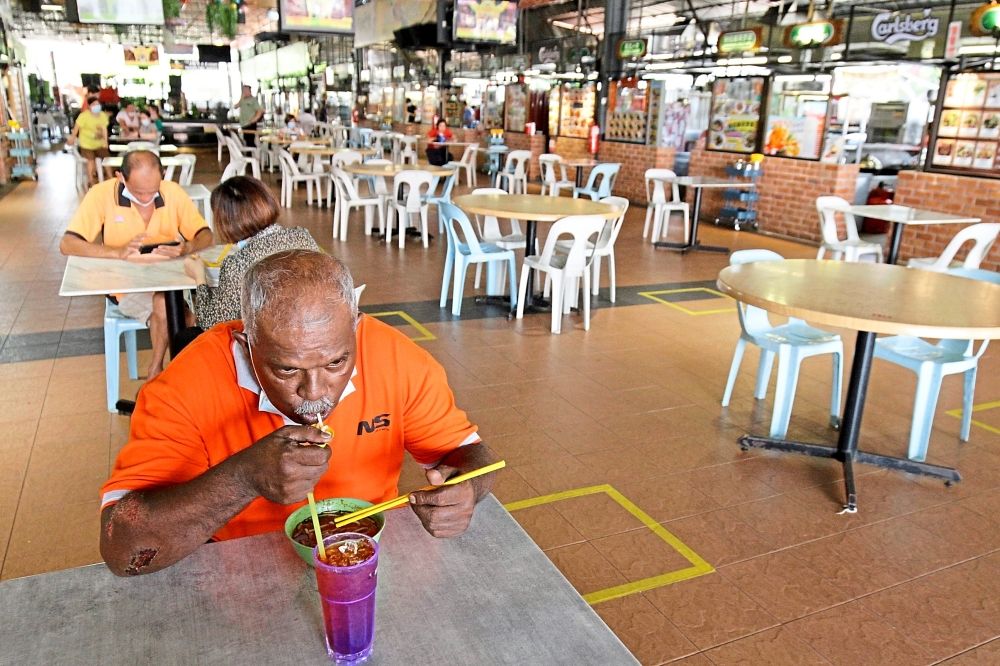 S. Govindasamy, 56, enjoying a bowl of laksa at a food court in Weld Quay, Penang.

“As much as it is nice to finally reopen for business, I will do all that is needed according to the standard operating procedure (SOP) set by the authorities, ” she said at her shop in Jalan Pantai Jerejak, Gelugor in George Town yesterday.

To facilitate the dine-in process, Chow said the state had introduced the Penang Contact Tracer or PGCare to register the names and contact numbers of visitors that patronised the eateries.

Lee said she had been checking the customers’ temperature as well as taking down their details if they wished to dine-in at her shop. 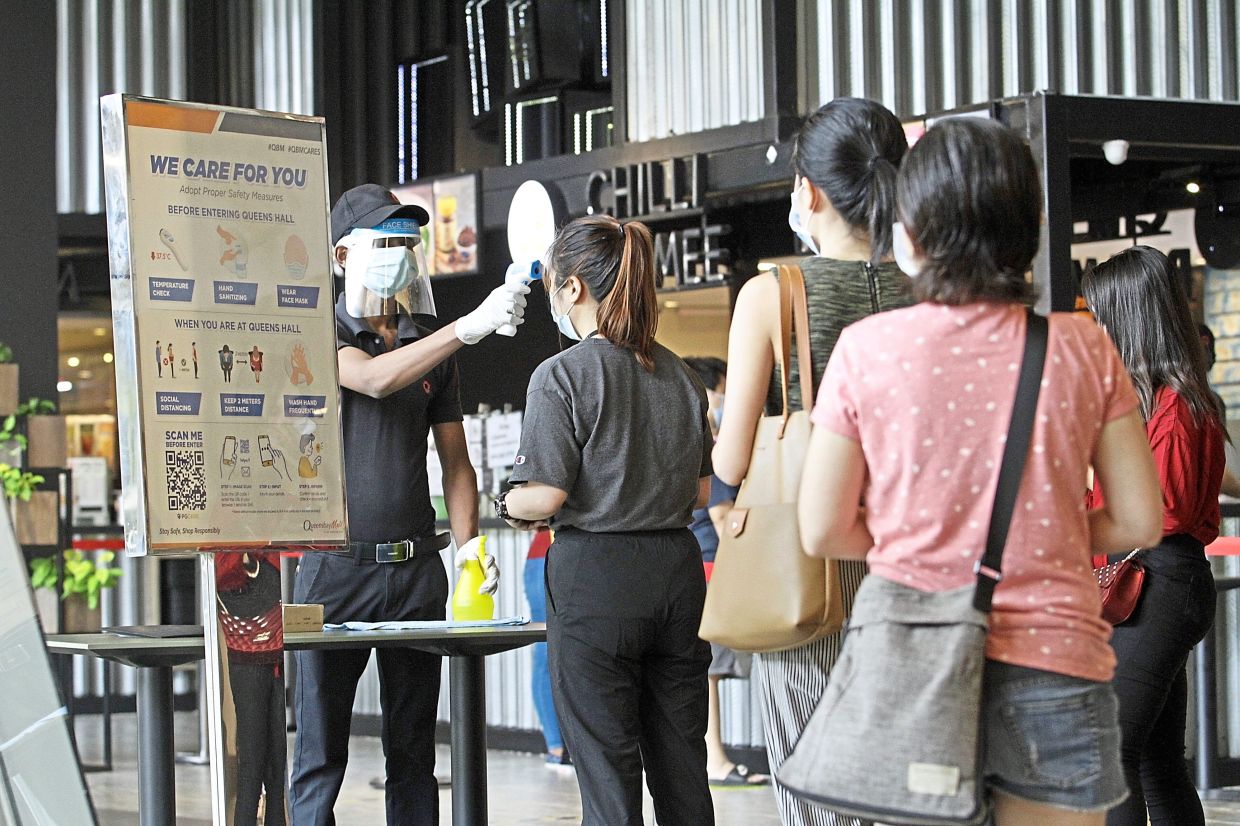 Shoppers having their temperature checked at Queensbay Mall.

“I have reduced my operating hours to ensure that we have ample time to clean up later, ” she said.

Ch’ng Swe Sen, 35, who runs a grilled seafood stall, said business had not been good during the first day of opening after almost two months.

“I did not have the large number of customers that I usually cater to in the afternoons.

“Usually by this time, there would be at least 10 customers, but now I only have one so far.

“It is nice to open my stall again but I am worried about my business as people are still afraid to dine in, ” she said at her stall in Weld Quay. 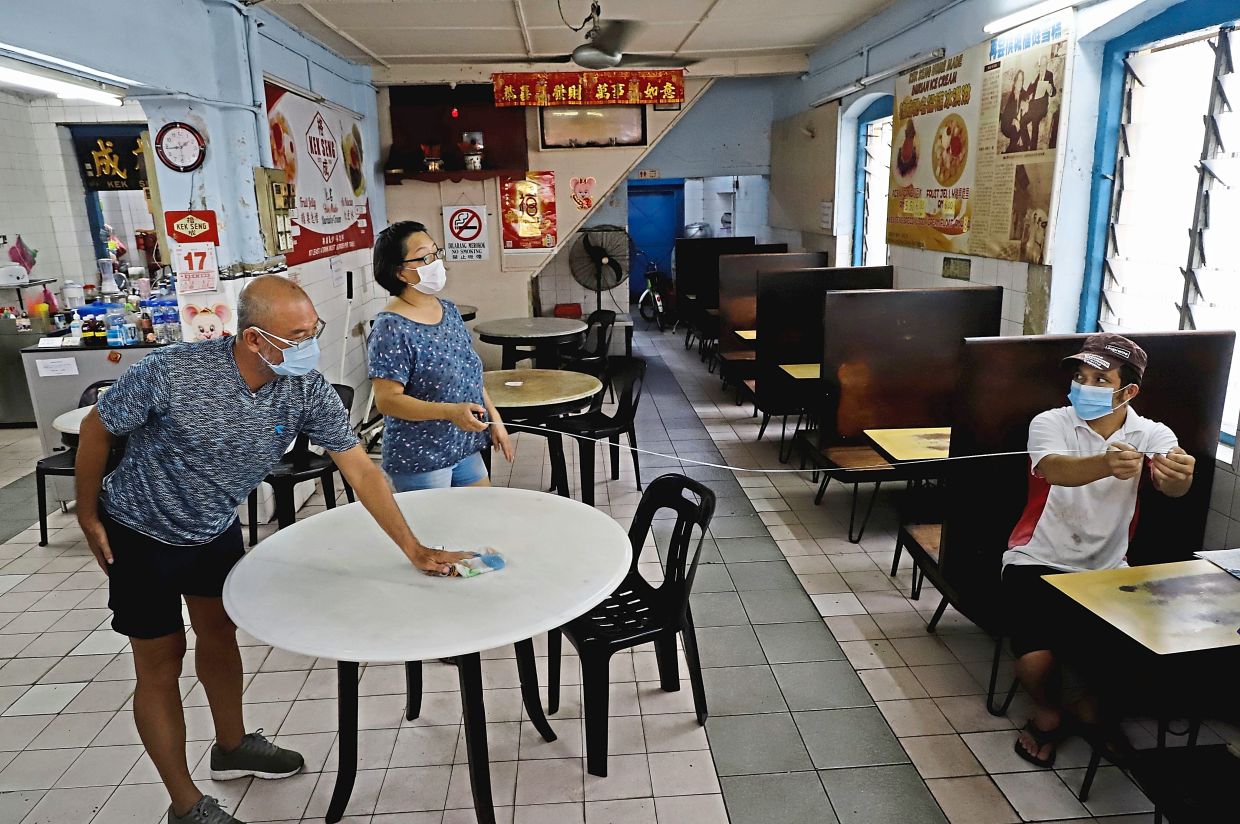 “But now, I have been selling merely 10 bowls as the food court is rather empty, ” said Chuah, who has been operating there for 10 years, adding that she inherited the family business from her mother.

She said she first offered takeaway when the movement control order (MCO) began, but had to temporarily close her business as there were no customers. 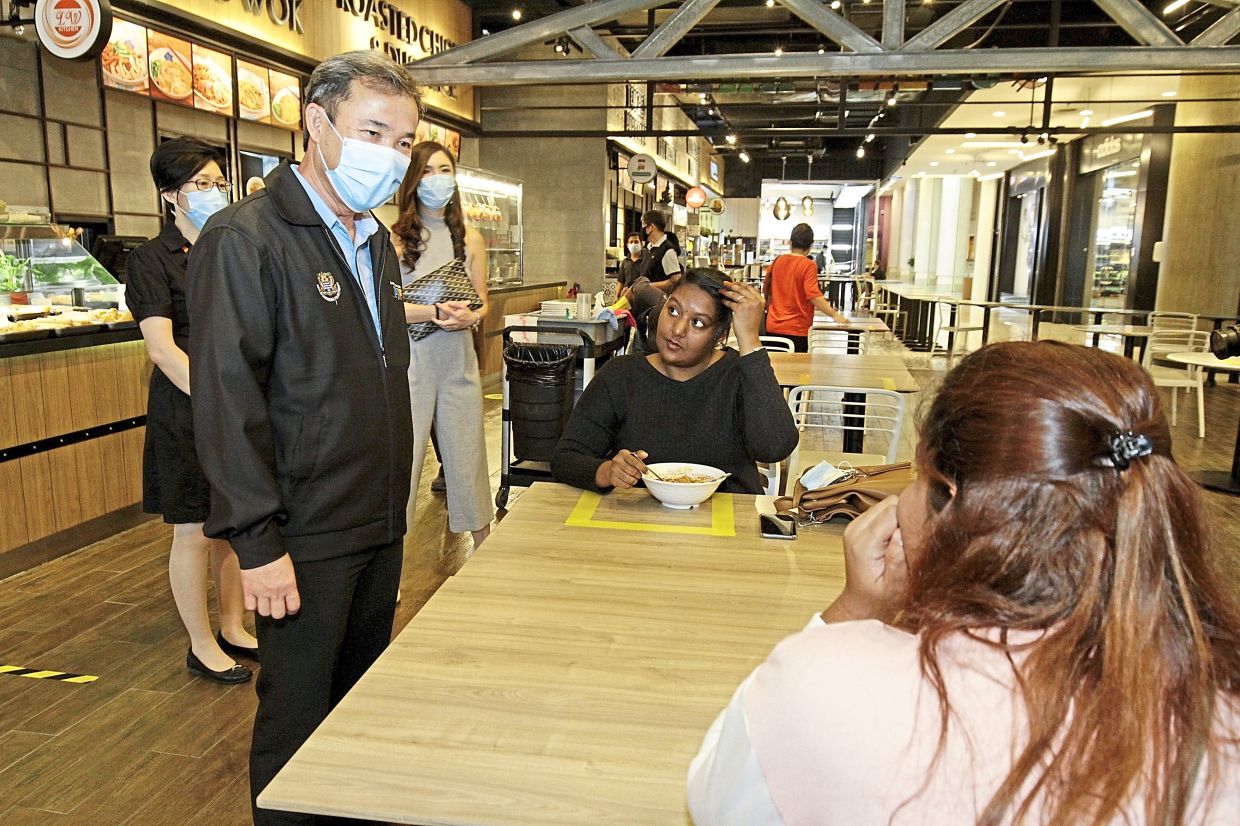 Yew speaking to diners during his visit to the mall. — Photos: LIM BENG TATT and CHAN BOON KAI/The Star

“We are strictly following the SOP and will only serve those who adhere to them, ” he said.

Earlier, Penang Island City Council mayor Datuk Yew Tung Seang conducted a site inspection at a shopping mall in Bayan Lepas to see if the food outlets there followed the SOP and if they were using the PGCare system.

“Based on our survey, there are still some eateries that are being extra careful in taking time to reopen.

“Some are even imposing additional precautionary measures.

“For foreign workers, we highly encourage them to go for the Covid-19 screening test. 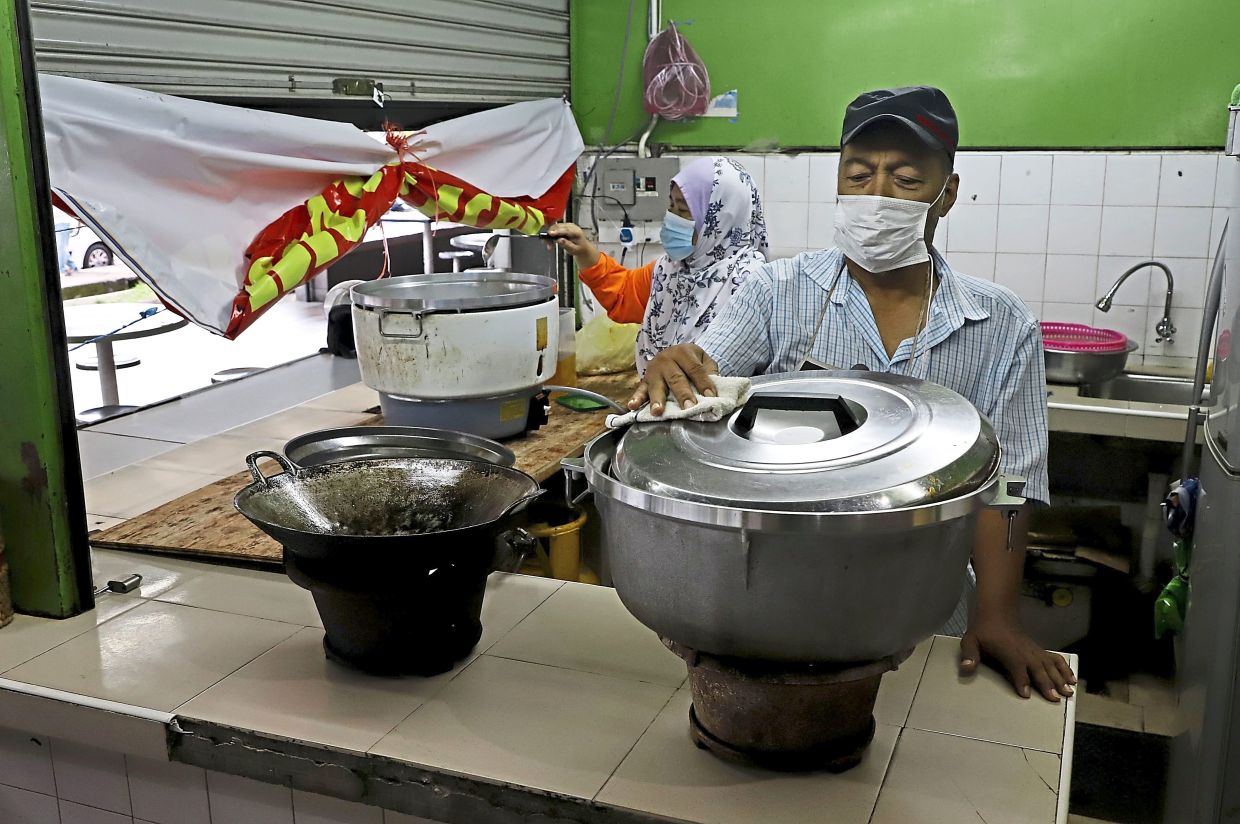 Afandi Puteh, 57, and his wife Karsinah Ranopaviro, 54, operating their stall in Bayan Baru.

“We appreciate all who have followed the social distancing rules when dining-in at coffee shops, kopitiams and restaurants, ” he said.

Yew said the SOPs and safety measures were crucial to ensure Penang remained in the green zone.

“We have noticed that many coffee shops have decided to continue to offer only takeaways. We respect their decision.

“We allow everyone to offer dine-in services, but it is up to them, ” he said. 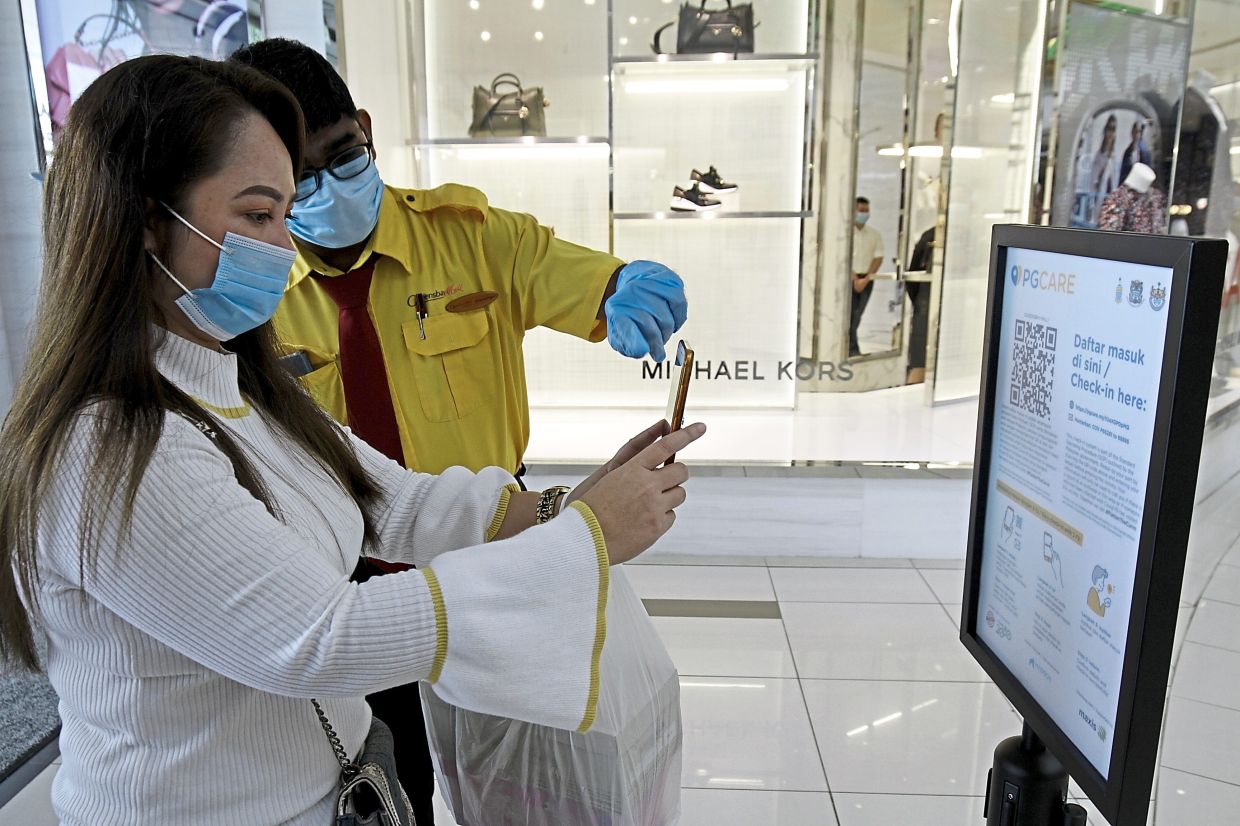 A shopper scanning the QR code to register her details under the Penang Contact Tracer or PGCare at Queensbay Mall.

On PGCare application, Yew said it could be used to replace the SOP of registering the information of each customer manually.

“PGCare only needs three simple steps where the customer scans the QR code, fill in their information and check-in.

“In reality, this system saves time, avoids contact and ensures private information is safe and not misused.

“PGCare will only record your name and contact number. 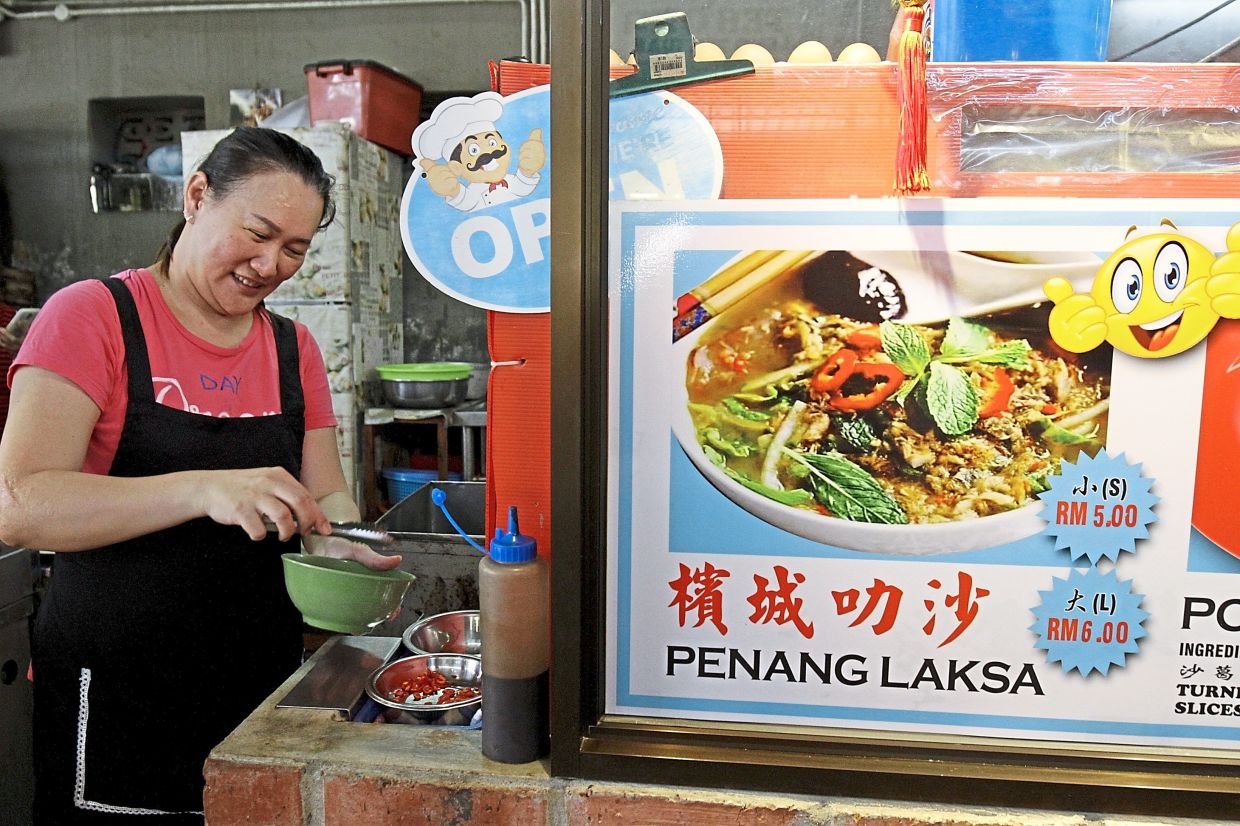 “The information can only be accessed by the state government while the business premises and others will not have access to it, ” he said.

Yew said the data collected would be accessed only if there is a request from the Health Ministry for the purpose of contact tracing.

“The data will only be kept for 30 days and it will be automatically be deleted after that, ” he said.

Upon signing up for PGCare the first time, subsequent visits to eateries and shopping outlets merely require the customer to scan the PGCare QR code on display outside those premises for hassle-free entry at those places.