Adjusting to drop in demand

EVERY year, biscuit and tidbit sellers look forward to Ramadan as there will usually be a sharp increase in sales with Muslims preparing for the Hari Raya Aidilfitri celebration.

However, the Covid-19 outbreak and movement control order (MCO) imposed by the government to curb its spread, has dampened their hopes of earning a good income as demand for festive treats has dwindled.

With balik kampung trips and open houses discouraged under the conditional MCO, fewer orders have come in, affecting these home-based traders’ bottom line.

Nooraihan Abdul Karim, 63, said although she managed to make some sales this year, business has not been as good as in previous years.

“Last year, I had a stall at a bazaar in Subang Parade every weekend and half of my sales came from walk-in customers.

“So far this year, demand has dropped by 50%, likely because of the MCO,” she said.

Nooraihan, who lives in Subang Jaya, said she had made only six types of biscuits this year, compared to 13 last year.

“Before, I had an assistant from Damansara helping me and we could prepare up to 120 jars a day but she was unable to come this year because of the MCO.

“Nowadays, I only prepare about 35 to 50 jars a day,” said the entrepreneur, adding that she normally worked from 10am to 11pm.

Among the biscuits she is selling this year are semperit, pineapple tarts and chocolate chip cookies.

She relies on an e-hailing service to deliver her products to customers, some of whom are located as far as Rawang.

“I get some customers via word of mouth,” she added.

She said some of the raw supplies she bought before the MCO was announced, remained unused because of the decline in sales.

“I normally begin stocking up well before Ramadan to ensure that I have enough supplies to meet orders.

“Since the MCO, I only make biscuits if there are orders, to prevent wastage,” she said.

Noor Adiah sells her products to trusted distributors, who in turn resell them to buyers elsewhere for a slight profit.

“However, some distributors are not buying as much this year,” she said.

Noor Adiah, who lives in Puchong, Selangor, is thankful that her two children, aged 18 and 16, help her prepare and pack the biscuits.

“My daughter usually helps me in the kitchen while my son prepares the jars for delivery,” she said.

Nur Maissitah Ali, 31, from Wangsa Maju, Kuala Lumpur, said she had forked out RM7,000 to kick-start her business prior to the MCO.

Like Noor Adiah, she relies on distributors to sell her products.

“Many distributors are reluctant to buy this year because they are not confident about being able to sell the stock.

“Some distributors sell the biscuits at workplaces, but sales have not been very encouraging as most people are now spending more time at home,” she said, adding that she used an e-hailing service for delivery.

“Some customers do not want to pay more; since there is a delivery fee, they will have to buy a large quantity to ensure it is worthwhile,” said Nur Maissitah.

Norhayati Md Jusoh, 54, from Sabak Bernam, Selangor, said she and her 15 assistants started making cookies in February but stopped production after many distributors cancelled their orders.

“I now have some 400 boxes of biscuits to sell,” she lamented.She said this was the first time she faced such a situation after being in the business for 20 years.

“I have to sell the biscuits at a lower price now to ensure they do not go to waste.

“Hopefully, I will make enough to pay my workers,” she added.

Mohd Azri Aziz, 30, in Setiawangsa, Kuala Lumpur, said he had always stocked up on biscuits for his guests for Hari Raya Aidilfitri.“I will buy some this year, but probably not as much as last year because I do not expect any visitors with the MCO still in place,” he said.

Azri said he preferred to buy biscuits from supermarkets rather than individual sellers.

“I want to avoid the crowds at stalls.

“Although some sellers offer delivery service, I prefer to just buy them from supermarkets this year,” he said.

Nadilla Mohd Zain, 29, from Petaling Jaya, said she bought biscuits online previously, but would not be buying any this year.

“With the ongoing Covid-19 pandemic, we do not know if the sellers are free of infection,” she said.

“I usually look out for sellers on social media and place my orders with them.

“However, I will not be buying any this year since I will not be going back to my hometown as interstate travel is prohibited,” he said. 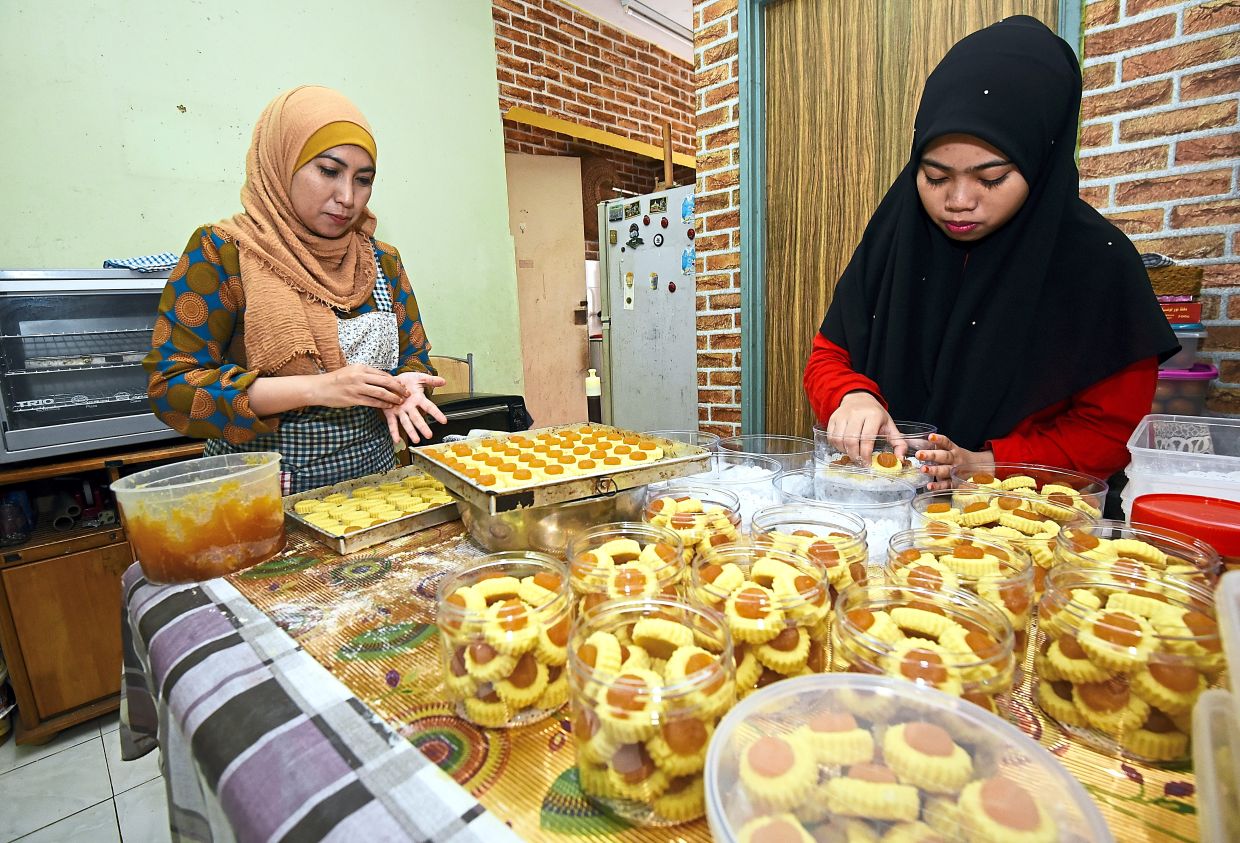 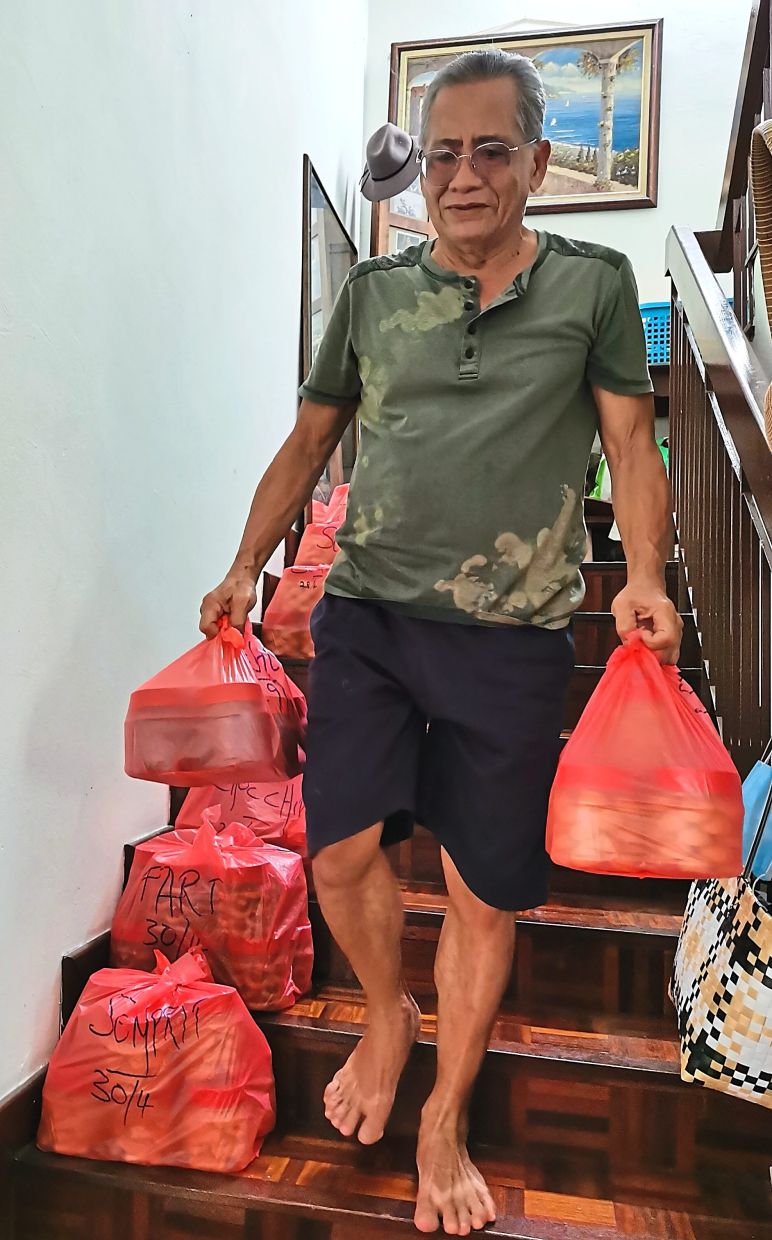 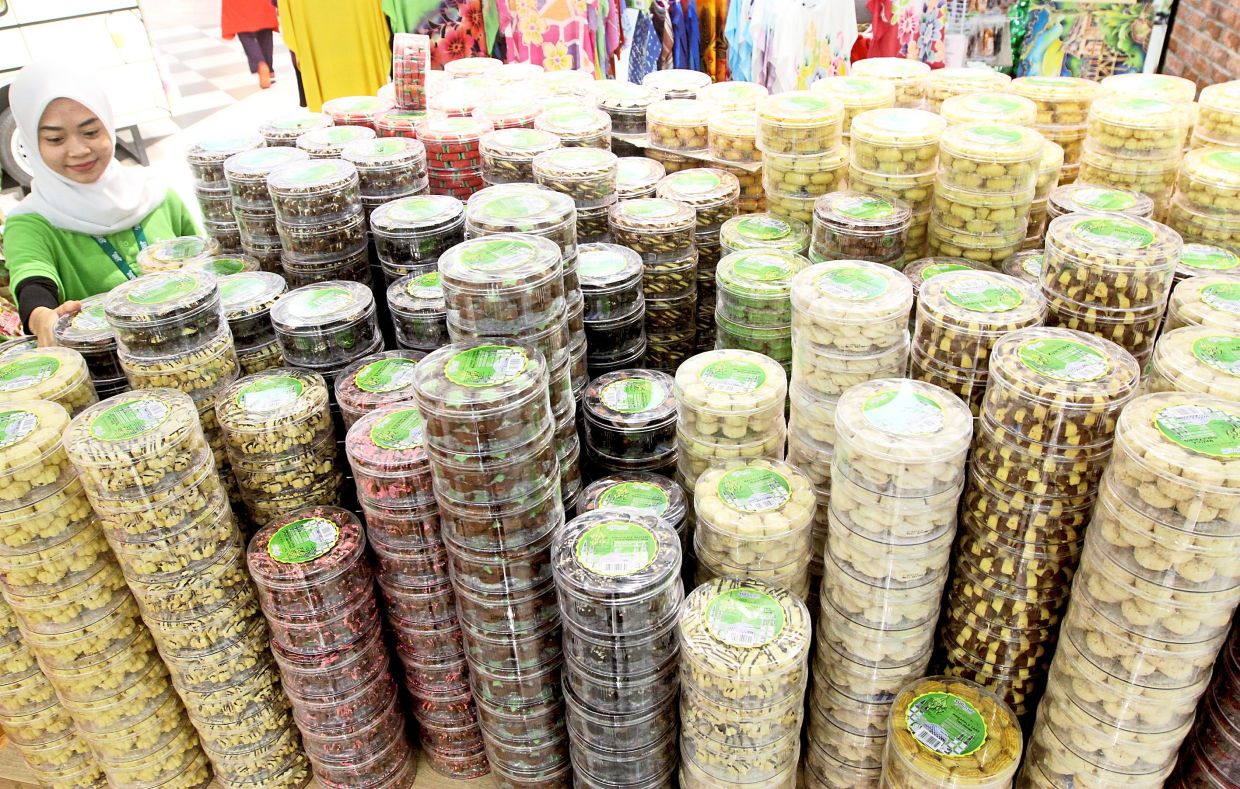 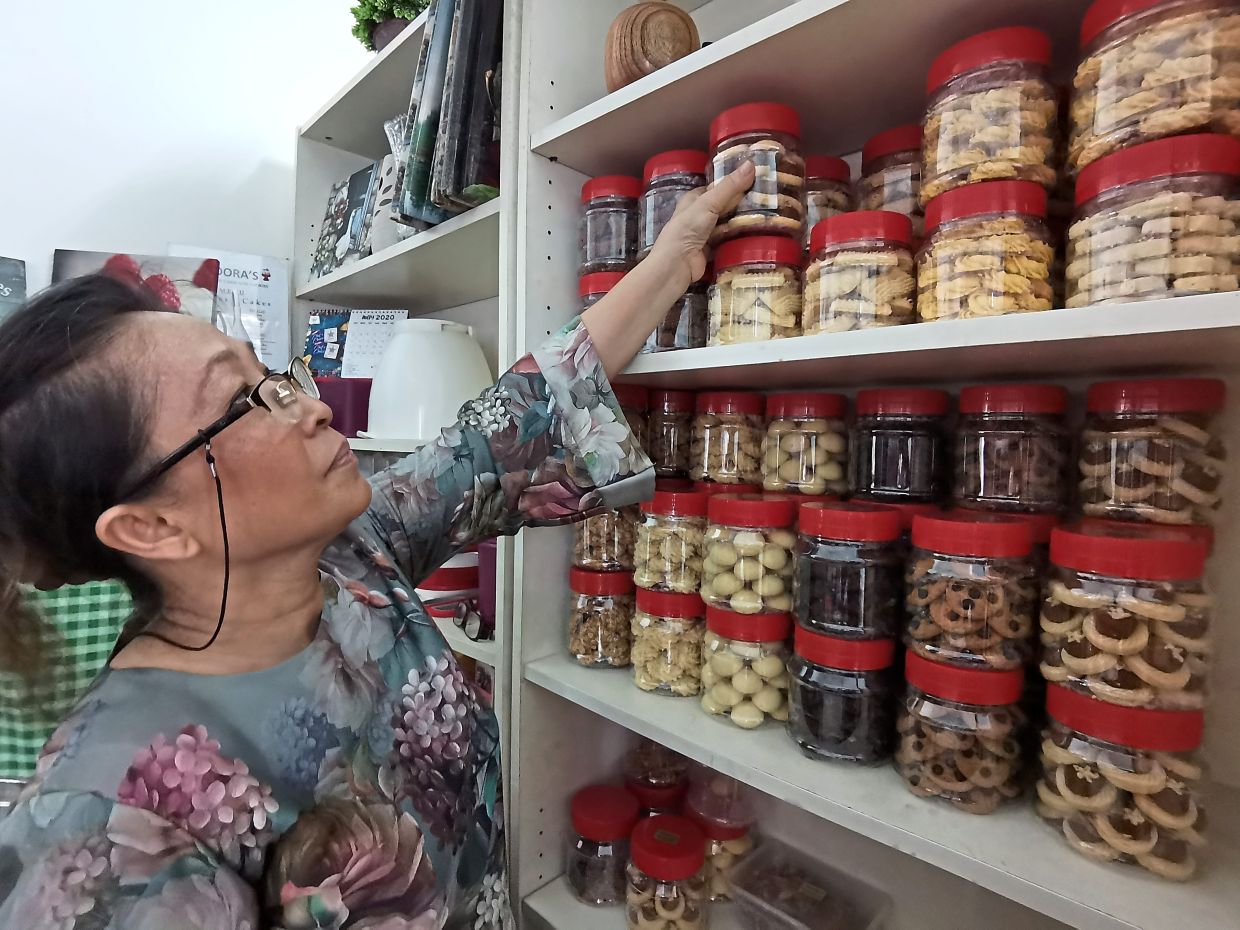 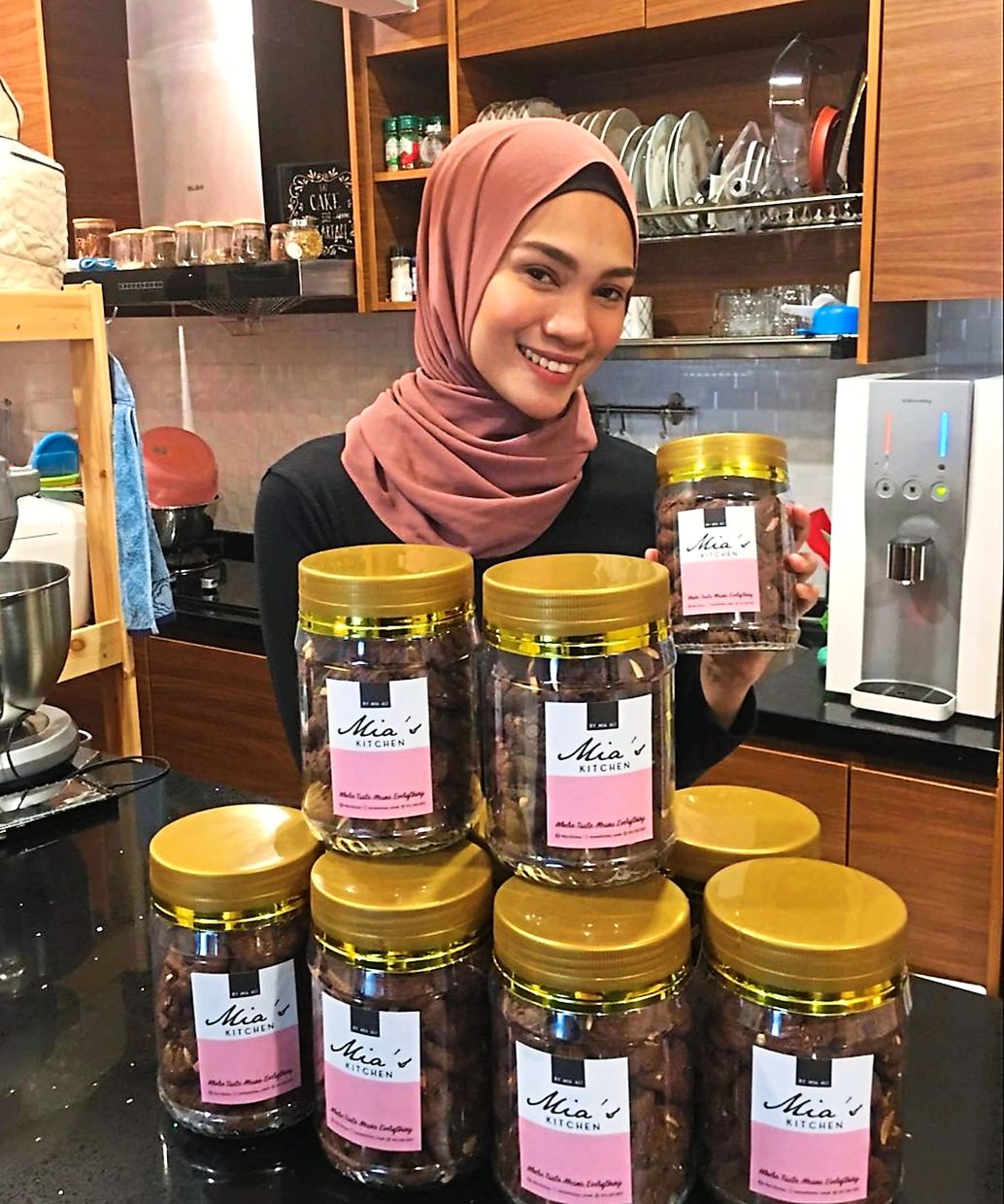 Stacks of biscuits are a common sight during festive seasons but there has been a drop in demand for Hari Raya this year because of the Covid-19 pandemic. — Filepic

Nooraihan is only making six types of tidbits this year, compared to 13 last year.

Nur Maissitah forked out RM7,000 prior to the MCO to kick-start her biscuit business