The commercial area in Precinct Bidara in Bandar Botanic being disinfected.

DISINFECTION on a wider scale is being carried out in parts of Bandar Botanic, Klang.

The Klang District Fire and Rescue Department headed a joint operation that comprised 30 personnel from the department, six from the Klang Municipal Council, two from south Klang Police headquarters and 25 from Alam Flora Sdn Bhd. 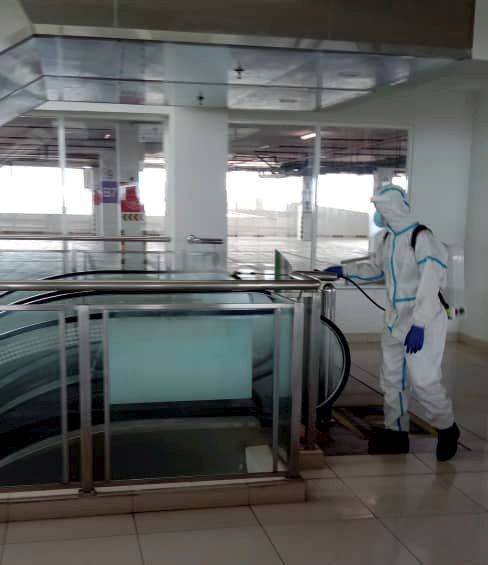 During the seven-hour operation yesterday, they disinfected frequent touch-points, such as door knobs, lift buttons, railings along roads, five-foot-ways and escalator railings to curb the spread of Covid-19.

“We began the first phase of aggressive sanitisation works from April 1 to 3 in different hotspot areas in Rantau Panjang, Klang.

“In this second phase we are doing the same for certain parts of Bandar Botanic including a wholesale centre, a hypermarket in Bandar Bukit Tinggi and a hypermarket in Taman Sentosa. It involves both commercial and residential areas”.

Hussin added that during the next two days, the team will focus their efforts on schools, government quarters, shoplots as well as residential areas including walk-up apartments.