FORTY-seven hotspots in the country are currently being disinfected by the authorities, with four of the red zone districts being in the Klang Valley.

The four are Lembah Pantai, Petaling, Hulu Langat and Seremban.

For these areas, the authorities will disinfect road fixtures such as lampposts, bus stops, sidewalks and public transportation hubs.

Fire and Rescue Services Department director-general Datuk Mohammad Hamdan Wahid said the public should stay at home and keep the roads free to allow the men in uniform to do their job well.

“If you stay at home and do not travel, the roads will be free of traffic. This will enable the authorities to move their 10,000-litre and 20,000-litre water tanks faster and cover more areas in the disinfection process.

“The disinfection is done mostly on spots that are regularly touched by people such as handrails.

“Once sprayed with the sodium hypochlorite, the area will be disinfected within five minutes, ” he said. 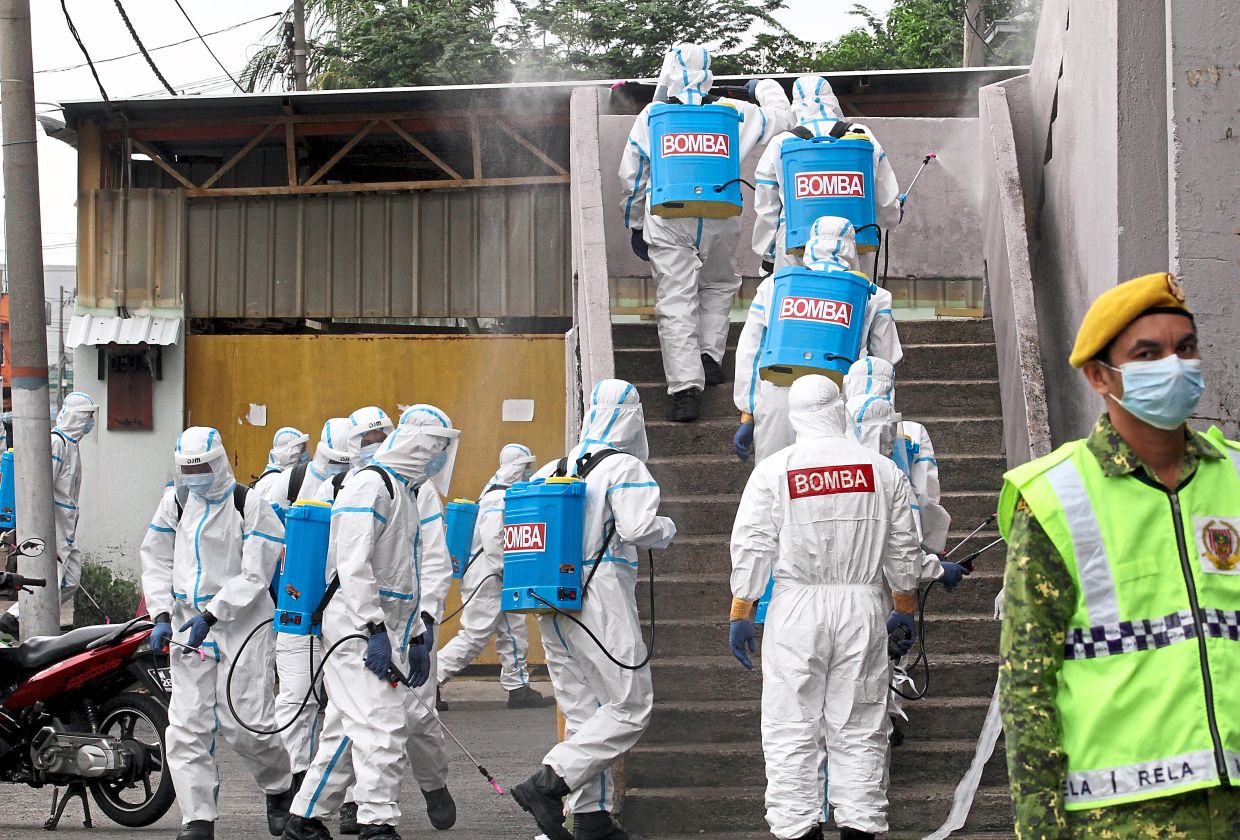 A team from the fire and rescue services being deployed to the Jalan Othman Market in Petaling Jaya.

This is after 455 residents tested positive for Covid-19 in the city, with the most number of cases reported in Lembah Pantai at 249 as of April 1.

Over the coming week, hundreds of hotspots in all 11 parliamentary constituencies will undergo the sanitation exercise.

“We are targeting areas with a high concentration of people, ’’ said Nor Hisham.

The mayor said the areas were those identified as red zones by the Health Ministry.

“Notices have already been put up in these places so that the public are aware of it and will avoid those areas, ’’ he said.

The mayor said sanitation officers would be armed with the right gear to carry out the disinfection exercise.

“They will be equipped with high pressure mist blowers, spray cans, jetters, fog sprays and water tankers to wash the area.

“New areas will be identified at a later date, ’’ he said.

So far, the areas that have been disinfected are Sri Petaling, Bukit Damansara, Kampung Baru, Pudu and Masjid India.

At least 200 people are involved in a disinfection exercise.

Each area cleansed is further divided into mini hotspots.

“For example at Pudu market, we identified 30 hotspots in and around the market and they were given a thorough cleansing.

In some areas, drones are used to help in the sanitisation of high-rises such as in Kampung Baru.

The sanitation exercise usually starts at 9am and ends by noon.

Nor Hisham said all disinfection exercises carried out by DBKL would follow Health Ministry standards.

He said this included the spraying method, the chemical used and the disinfection procedure as well as protocols.

“DBKL has been carrying out disinfection exercises daily at certain locations since March 18 when the movement control order (MCO) came into effect.

“We liaise with other government agencies to get information on which areas are considered to be a Covid-19 hotspot, ” he said.

“DBKL will also carry out disinfection at all wet markets in the city from time to time, ” said Nor Hisham during a disinfection exercise around Jalan Masjid India and Dang Wangi.

The operation started at Dataran Merdeka and focused on commercial and residential premises within a 1km radius.

Some 40 personnel from DBKL’s Health Department were mobilised along with several other agencies including Alam Flora Sdn Bhd, Solid Waste and Public Cleansing Management Corporation (SWCorp), fire department and the police.

The Jalan Othman Market was one of the locations sanitised.

Housing and Local Government Minister Zuraidah Kamaruddin was present to observe the cleansing carried out by some 50 personnel.

The activity was part of the government’s efforts to disinfect selected locations and restore public confidence, said the minister.

“Twenty-three locations are identified as red spots, whereby there are over 40 Covid-19 cases recorded within a 1.5km radius. 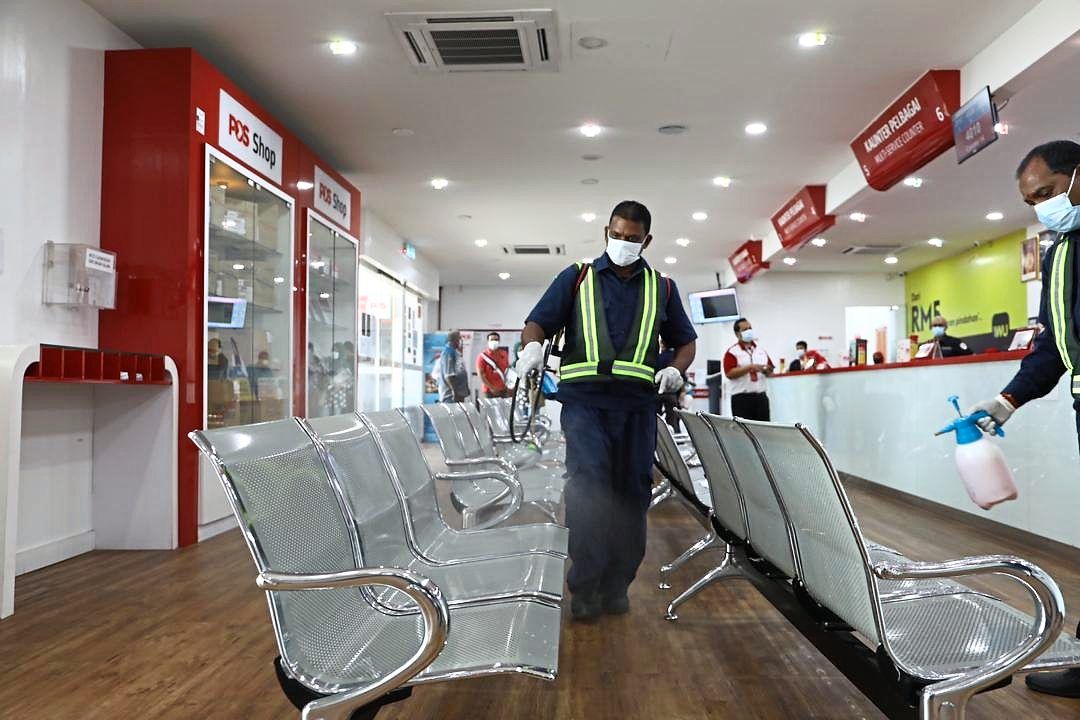 “Some 24 locations are identified as orange spots, whereby between 20 and 40 cases were recorded.

“All of Petaling Jaya is a hotspot. Next, we are going to disinfect the people’s housing project (PPR), ” she said.

Zuraida assured that the chemical, costing about RM6 a litre, was safe to be used for sanitation.

She added that the cost to disinfect these places was not an issue because the government worked with the authorities that had equipment such as the fire department and SWCorp.

“We have some 100,000 litres of chemicals that were donated for this disinfection process. The Government will add to it when necessary, ” she said.

A sanitisation exercise was carried out at the Sri Serdang Flats in Jalan Sri Serdang Selatan on March 31.

Subang Jaya Municipal Council (MPSJ) issued a notice to the residents stating that the exercise would be done from 2pm to 5pm at stairways, corridors, and common areas.

Residents were told to cooperate by ensuring that the walkways were not obstructed by their belongings, and that they should stay in their own homes during the disinfection. 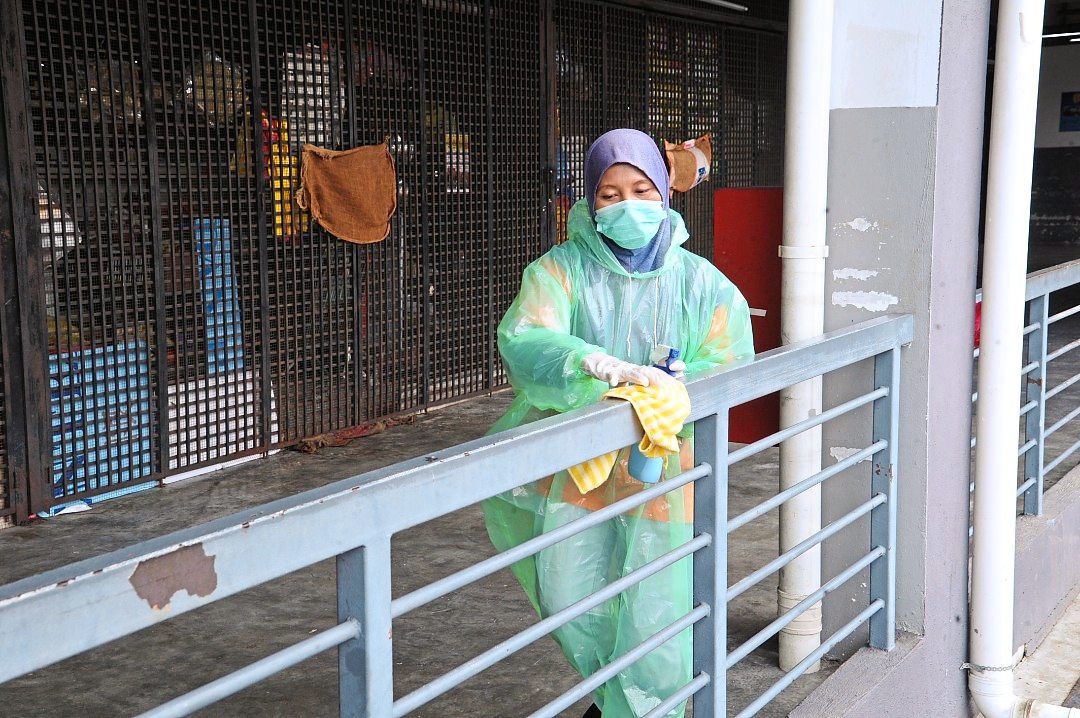 A railing being wiped at SS15 market, Subang Jaya.

They were also reminded to keep their units and the flats’ common areas clean.

The day before, public sanitation was carried out at the SS15 market in Subang Jaya. MPSJ Valuation and Property Management Department director Aida Omar headed the exercise.

Public cleansing contractors were tasked with carrying out the disinfection.

Disinfection exercise on a wider scale is being carried out around Pekan Rantau Panjang about 12km from Klang Municipal Council’s (MPK) headquarters, which had been categorised a Covid-19 high-risk area.

In Klang, the district fire department coordinated the sanitisation team that comprised 30 men from the department with eight personnel each from MPK, North Klang Police headquarters and People’s Volunteer Corps (Rela).

Wearing personal protective equipment, they carried out a seven-hour cleansing operation until late afternoon to disinfect frequent touch-points such as door knobs, lift buttons, railings along roads and five-foot-ways, and escalator handrails. 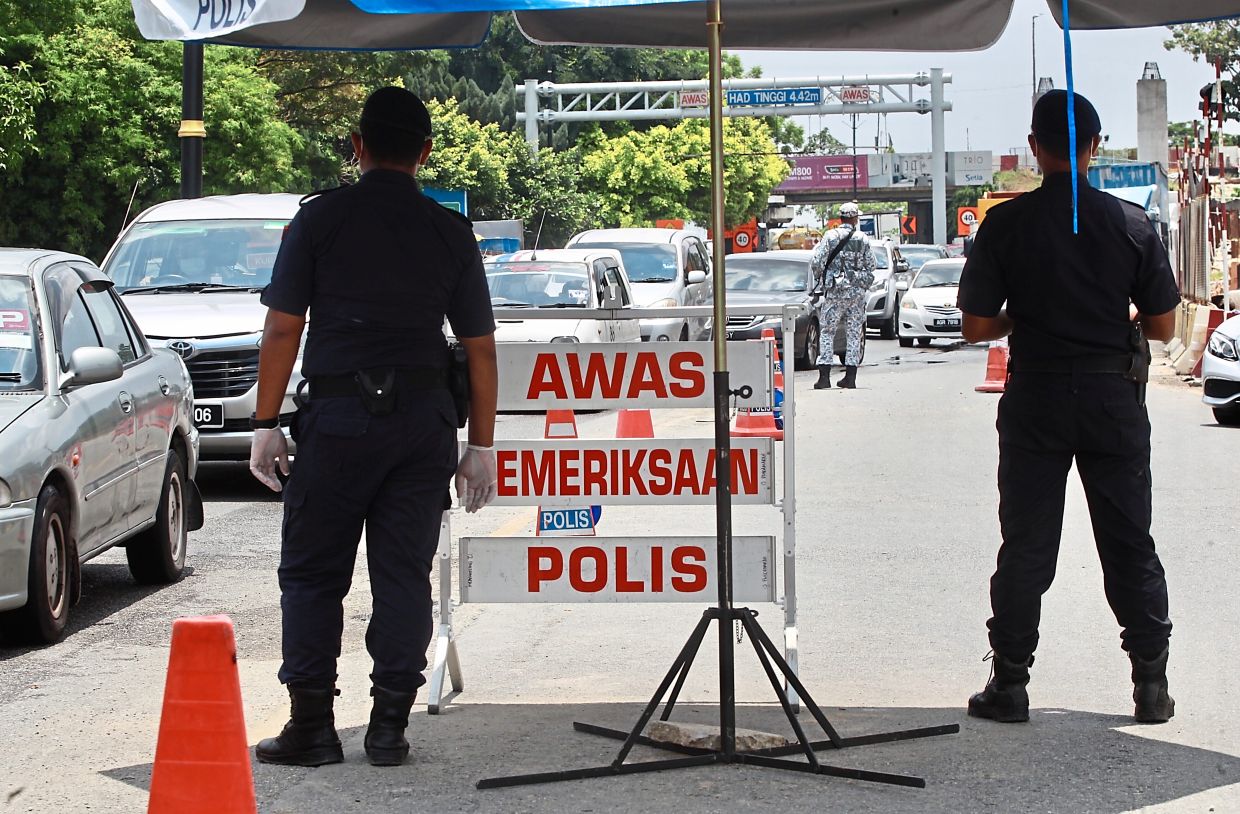 “Our operations began at 10am after a short meeting at the village hall in Pekan Rantau Panjang.

“We had informed the shop owners and residents that a disinfection exercise would be carried out for three days. Most of the locals gave full support by staying indoors, even the fast food outlets only began operations after our men had disinfected the area, ” he said.

Hussin added that the team would focus on schools, government quarters, shop lots, residential areas and the walk-up apartments in Taman Kembara in the following two days.

Hussin said the disinfection exercise would be carried out in Bandar Botanic next week from Monday to Wednesday.

Markets and public spaces are being disinfected by a team from Selayang Municipal Council (MPS), which consisted of 25 personnel led by environmental health officer Muhd Kasri Muhardin.

Among the locations targeted for disinfection were the Bandar Baru Selayang commercial area, food courts, bus stops and MPS-owned markets. 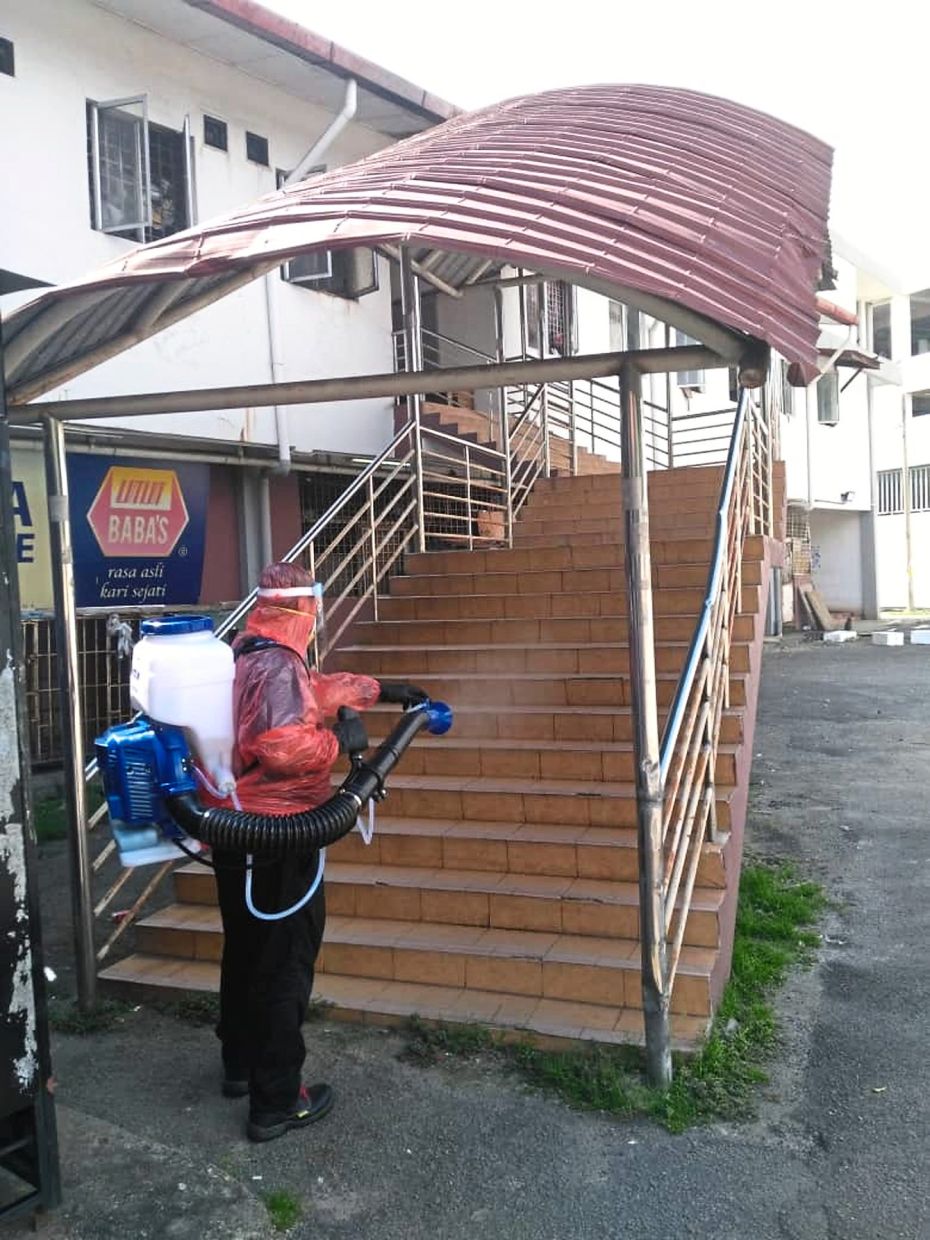 MPS sending its personnel out to disinfect public places in Bandar Baru Selayang. (Right) A lift in Serdang Villa Apartment being disinfected.

“This exercise is required as a precautionary measure, ” said MPS president Shamsul Shahril Badliza Mohd Noor in a media statement.

He said it would be carried out at other public spaces as well throughout the MCO.

Apart from the disinfection exercise, MPS has also tightened enforcement, especially at all its public markets and grocery stores to ensure the public practise social distancing.

He added that the sanitisation operations were carried out daily at different public spaces.PUTRAJAYA

“We are also implementing additional disinfection works at commercial complexes and government facilities this week.

“This is done as a joint exercise with other agencies such as Alam Flora, fire department, SWCorp, police, Rela, Health Ministry and Malaysia Civil Defence Force.”

“PPj stepped up cleaning works at buildings and public facilities under our administration with daily disinfection of high-risk spaces such as building lobbies, lifts, public toilets, food courts and children’s playgrounds.

“We are also disinfecting high touch-points with a diluted bleach solution, ” he added.

A total of 86 locations under MPKj’s administration have been identified for the sanitisation exercise.

“As of March 30, I would say that most people are complying with the MCO. While compliance was initially slow, it is now at 95%, ” said Najmuddin.

“It has been challenging to ensure that hawkers, traders and business owners comply with the MCO but they do cooperate with us.”

He said MPKj had inspected 237 premises as of March 30 and issued 189 notices to those found flouting MCO regulations.

“We also raided three factories that were open during this restriction period, even though their operations were unrelated to essential services. They also did not have permission from the relevant ministry to operate, ” he added.

Bus stops, public parks and train stations in Ampang are being sanitised by Ampang Jaya Municipal Council (MPAJ) following a directive from the National Security Council and Health Ministry.

Areas such as Pandan Indah, Keramat and Pandan Jaya were given a thorough cleaning and disinfected to help curb the spread of Covid-19.

MPAJ press relations officer Norhayati Ahmad said that while markets under its jurisdiction had been cleaned since March 23, the local authority would now focus on other public areas. MPAJ is also disinfecting public transportation hubs within its jurisdiction.

“We are prioritising disinfecting places that have a high concentration of people as well as street infrastructure, ” she said.

They include the vicinity of Mid Point shopping centre, Pandan Indah commercial centre, Keramat AU1 to AU5, and children’s playgrounds.

“Each day, some 30 employees will target a specific location to clean and disinfect.

“We hope that residents will also play their part by following the officers’ instructions, ” said Norhayati.

She noted that although a majority of people were adhering to the MCO, there were some who fail to abide by the rules.

“Officers are continuing to inspect businesses that have been allowed to operate, but people are not maintaining social distancing within the premises.

“For the moment we are giving them verbal warnings but if they continue to disobey, sterner action will be taken, ” she said, adding checks are being carried out with the police.

Serdang Villa Apartment was disinfected after a resident there was found positive for Covid-19.

Seri Kembangan assemblyman Ean Yong Hian Wah said he was approached by the apartment management for allocation to disinfect the apartment.

“The Sri Serdang voluntary fire brigade disinfected the apartment. We provided the disinfectant.

“Disinfection was carried out at corridors and common places like the surau and activity centre, ” he saidm adding that there had been at least three cases in Seri Kembangan to date. 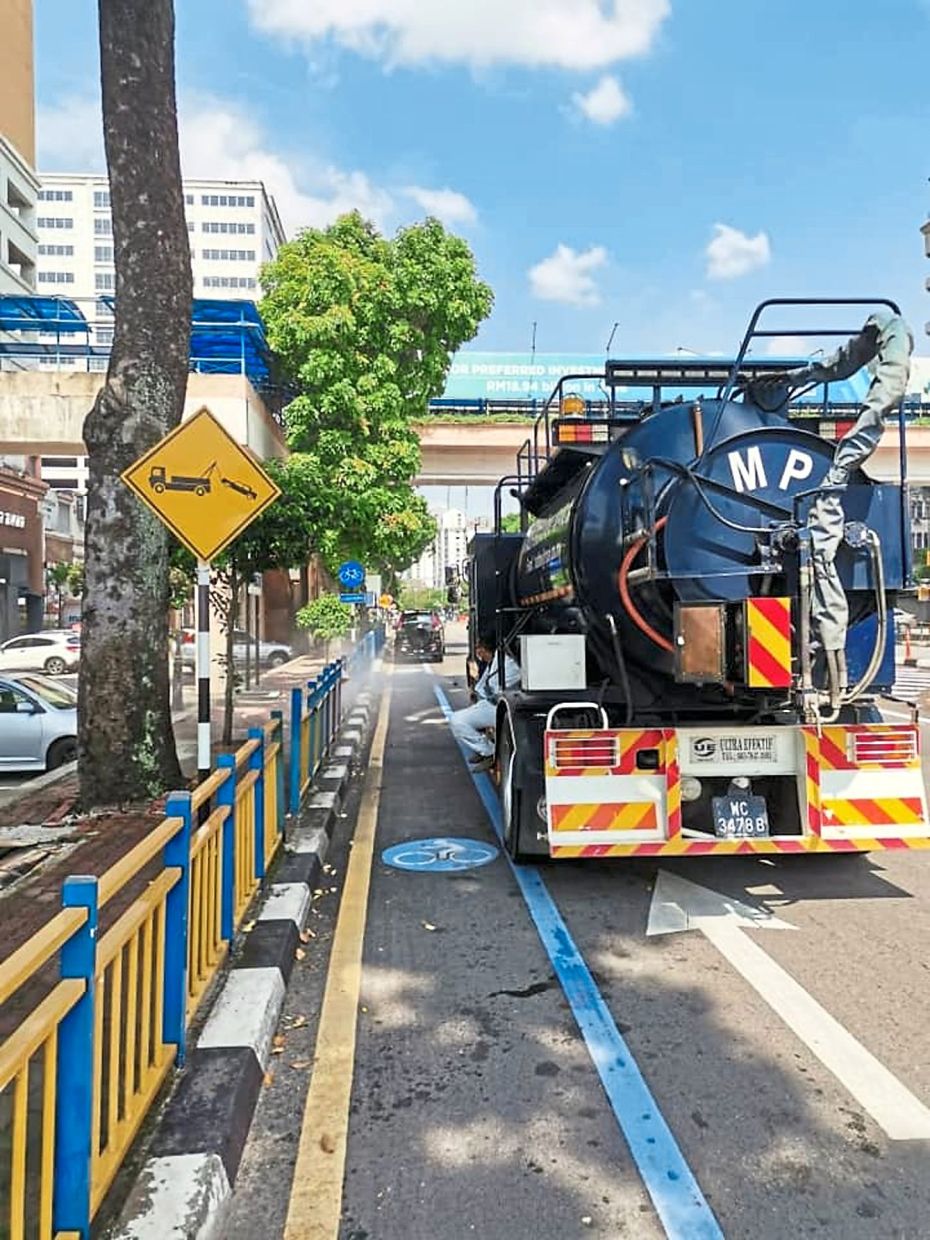 Bus stops and guard rails being disinfected by MPAJ personnel.

“I urge people not to panic and follow guidelines by the National Security Council, ” he said.

Ean Yong noted that the situation at the markets was under control.

“Community policing members will stand by from 6am and MPSJ enforcement officers take over from 7am or 8am.

“All entrances are closed except for one, so people must queue up to get in. Only 50 people are allowed in at any one time.”

He reminded Seri Kembangan New Village residents to abide by the MCO and take precautions against Covid-19.