THE impact of Covid-19 and the movement control order (MCO) until April 14 has changed how everyone carries on with daily life and even how we interact.

Movement has been restricted somewhat and many find it difficult to stay put at home, but stay they must.

It is even more unbearable for the poor earning very little and living in very small spaces.

This is especially so for those living in the government people’s housing projects (PPR).

Suriana Welfare Society chairman James Nayagam said many living at the PPR did not have cash or food to feed their families at the moment.

The non-governmental organisation (NGO) has got approval from the Petaling Jaya police to enable them to distribute non-perishable food items to the needy.

“Many of the leaders in these PPR flats were calling us and asking for food aid, ” he said.

StarMetro spoke to some families living in PPR in Petaling Jaya and Kuala Lumpur and found some in dire straits, with their biggest worry being not having food to feed their family as they could not go out to work during the MCO.

Mother of eight, Nurul Fadiera Isa, 34, is raising two special needs children and her youngest child is a 22-day-old baby.

They live in a 660 sq ft low-cost flat in Desa Mentari. Her husband works as a housekeeper in a hotel nearby and his salary is RM1,200. The family has no savings.

“My eldest daughter is 17 and she is a slow learner. My second daughter has a hole in her heart. They are more prone to illness and I keep all my children indoors.

“They play among themselves and do not trouble me.

“We are worried my husband may have to take a pay cut in case his working days are reduced due to the current situation.

“We are already poor and our daily meal is only rice and soy sauce.

“Whenever we have eggs, we are happy. Otherwise sometimes I make sambal and we eat that with rice.

“We only have two face masks and since we don’t go out, we

are fine, ” said Nurul, who relies on two cloth masks that she bought for RM6 each from a friend.

She added that the family had several months of unpaid rental and electricity bills.

Desa Mentari flat tenant R. Puspavalli, 37, is a single mother who has to care for her six children and her parents in their late 60s.

The children are between seven and 15 years old.

Puspavalli was looking forward to joining her new job as a salesperson in Shah Alam but now had to wait until the MCO ends.

The family now lives from hand to mouth and has no savings.

“I spend about RM13 each time I buy groceries for the family. We eat just curry and rice, and eat meat once in a while, ” she said.

She is worried over the extended MCO as she is not able to work, and hopes for some form of donation for her family to get by.

She added that the family’s only form of entertainment was TV shows while staying indoors.

With a pair of eight-month-old twins and three older children, Zambagam Appalasamy, 35, is worried she will soon run out of baby milk powder and other food essentials for her family.

Her husband, an odd job worker who collects scrap metal for a living, is unable to work now due to the MCO.

“We stay at home and try not to go out of the house.

“I worry over how we are going to manage life in the next few weeks. Occasionally my mother-in-law will give us money, ” said Zambagam.

Her husband, a cook in an established corporate office, would have to take a pay cut with the extension of the MCO.

“He has been told there may be a pay cut but we are uncertain. With a baby coming soon my worries are endless, ” she said.

“They sell nasi lemak or flowers by the roadside. Some are electricians or labourers. They eat simple food but even that they cannot afford at the moment.

“The situation is just worsening each day and we hope they will receive food aid at least, ” he said.

“If a large family could stretch a loaf of bread over two days under normal circumstances, now they would finish it in a day.

“Even basic items like sugar and flour will finish faster as more meals are prepared with all members of the family at home, ” said Mohd Zaini.

At PPR Lembah Subang, widow R. Sundari, 45, and her daughter, who lost their earlier jobs as cleaners, were supposed to start work at a new place on April 1, but now that has been delayed.

The house is occupied by Sundari’s pregnant daughter and several grandchildren.

They do not have a TV to keep them occupied during the MOC.

Sundari complained that financial aid was not coming her way and called for a more even distribution of such funds by the authorities.

When January and February did not produce much sales, Thulasi Rathakrishnan, 44, a car salesman, began to worry.

The third month offered some hope and she managed to close two sales, but then came the MCO and all businesses had to shut.

Now Thulasi and her husband, also a car salesman, are confined to their Batu Muda PPR home in Jalan Ipoh.

For them, this MCO could not have come at a worse time, as

they now have to rely on their savings to get by. But they are not sure how much longer the money can last.

“We don’t have much food left in the refrigerator and we are worried that food supplies at the local markets will run out soon.

“People with a steady income may be able to cushion the impact of this MCO by making withdrawal from the Employees Provident Fund (EPF).

“But what about the self-employed like us who have no basic salary? Who can we turn to for help during this period?” she asked.

In Seri Semarak PPR in Jalan Ayer Keroh, some 40% of residents are self-employed while many others are elderly citizens.

Its former residents association (RA) chairman, Abdul Rahman Mohamad said relevant authorities needed to extend help in the form of food supplies for the people to go on with their daily lives during the MCO.

“Perhaps a census can be conducted to identify qualified recipients of this assistance pledged by the government, ” he suggested.

Khairul Anuwar Yusoff, 54, a committee member of the Intan Baiduri PPR RA in Selayang, called on the local surau to provide financial assistance to residents regardless of their racial and religious backgrounds.

“We live in a close-knit community where everyone knows each other.

“Therefore, we already know who among us need help the most.

“Why not the local surau extend financial assistance to the needy such as single mothers and children from poor families?

“The JMB and management committee can also hold a meeting to identify other ways to help those in dire situation, ” he said.

He added that MPs needed to step in to help the residents in their respective constituencies.

In Seri Aman PPR in Kepong, its RA took steps to address the issue of finance among its residents.

“We blasted a message in the residents’ group text, where we encouraged people to conduct small businesses from home in order to sustain themselves financially during the MCO period, ” said RA chairman Mohamed Nawaz Koya.

“For example, some residents are selling food and other residents can order and pick up the order from the seller at their unit, ” he said.

Nawaz said the association also worked with non-governmental organisations to channel aid to the needy, especially the self-employed and those on unpaid leave.

He also urged the government to suspend EPF contribution for the time being for employees so they could have more money to spend.

On March 23, Prime Minister Tan Sri Muhyiddin Yassin announced that Malaysians below 55 years old would be allowed to withdraw RM500 per month for one year as part of the government’s efforts to cushion the financial impact due to the Covid-19 outbreak.

But there were concerns, especially among those without a steady income that the measure did not address their financial plight.

Following that, on March 27, the Prime Minister announced a RM250bil stimulus package, which offered low-income households some glimmer of hope. 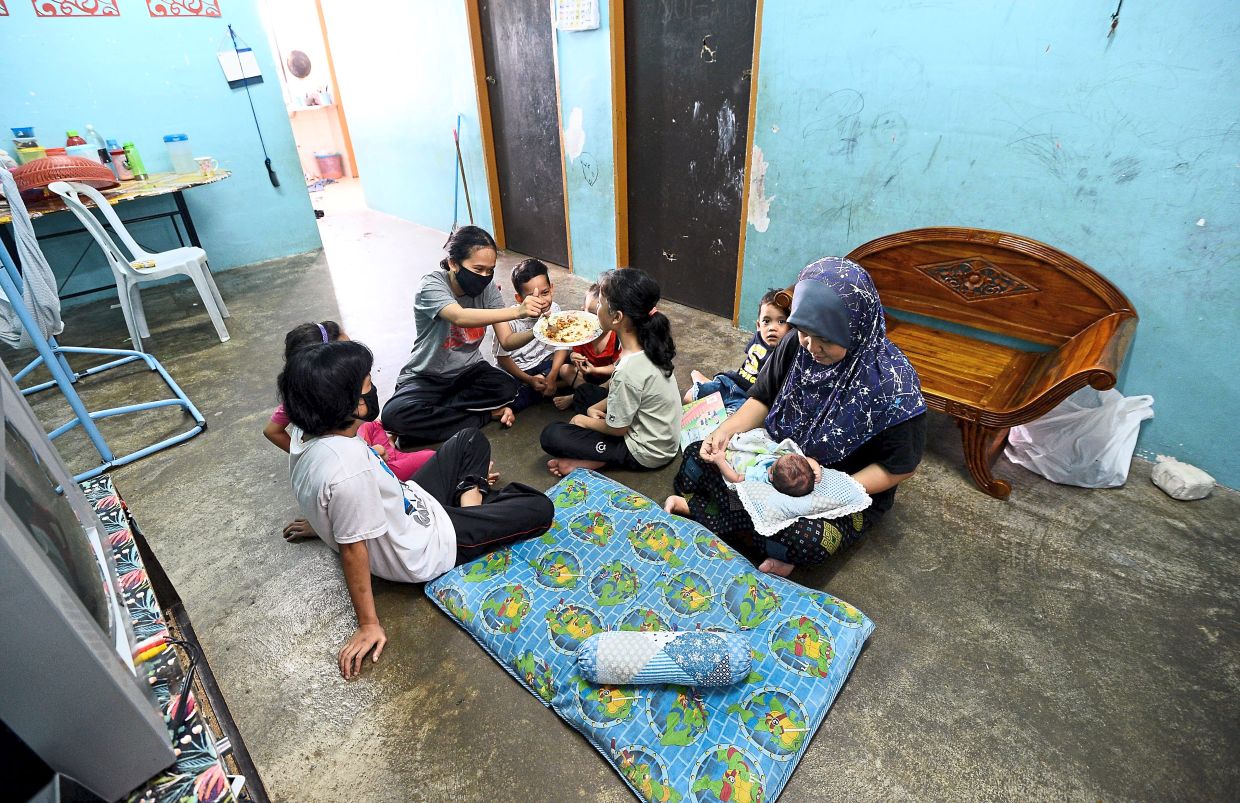 Nurul Fadiera (holding baby) is wondering how to make ends meet and if her husband will have to take a pay cut.

At PPR Lembah Subang, many odd job workers have to stay home now and have zero income. 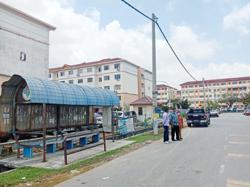