“The app will also include the changes to the operating hours of the ferry service which has also reduced its frequency.

“My advice is for everyone is to please stay at home and reduce your outdoor activities.

“Use the delivery services to get your daily necessities.

“Many things have happened in the last 24 hours.

“New instructions are now forced to be given especially by the city councils for the safety of everyone.

“For example, the restriction order given to roadside stalls which involves four markets on the island, ” he said during his daily public update via Facebook live.

Since the movement control order (MCO) was issued, Chow had stopped holding press conferences and only spoke publicly via Facebook.

He added that Penangites should not be feeling happy that the number of positive Covid-19 cases in Penang was lower than the other states.

“Now is not the time to differentiate the people of Malaysia.

Chow said many issues were raised during the state’s Covid-19 special task force meeting including the status of the latest cases in Penang.

“I wish to inform the public that we will be prepared in the event the situation worsens.

“For now, the Health Department will focus on those who are currently under quarantine.

“I was also briefed by the Immigration Department on Penangites who returned from overseas.

“The International Trade and Industry Ministry (Miti) also briefed me about the continued operations of factories which are involved in essential services, while the Domestic Trade and Consumer Affairs Ministry gave me an update on the sufficiency of essential items like hand sanitisers and face masks, ” he said.

Chow said roadblocks were set up in order to achieve the purpose of the MCO, that is to discourage outdoor activities and travel except for valid reasons.

“So, if you are leaving your house with permission for work, you will not be stopped at the roadblock.

“The bottomline is, it is best for you to stay at home, ” he said while responding to a question by the media about the ban on crossing to Seberang Prai.

Chow also offered his condolences to the family of the Covid-19 victim who passed away at the Penang Hospital on Sunday.

It was the first death in Penang due to Covid-19. 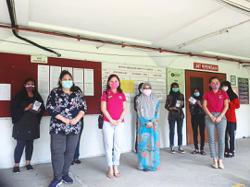