RAPID digital transformation could be the answer to an anticipated shortage of teachers worldwide a decade from now.

Liang said in 10 years, the world would need some 26 million adults trained as primary school teachers in order to reach Unesco’s quota.

“The main need to have that many teachers is to provide education for the hundreds of million children around the world.

“Maybe there are other ways by making use of technology to do something different from the traditional education structure, and then perhaps we still have a little bit of hope to achieve the 2030 SDG4 objectives, ” he said in his speech at the ‘Reimagining Tomorrow: The Digital Transformation of Education’ event held at Wawasan Open University at Jalan Sultan Ahmad Shah, Penang.

Speaker Lee Soo-Inn said her United States-based company and her vision to provide education for all began when her son was born with special needs.

Lee is co-founder and chief executive officer of education technology company Enuma Lee who developed an educational gaming application for children, including those with learning disabilities.

“We wanted to develop and design accessible games and applications that would help all children to learn and grow independently, ” she said.

Lee also stressed that apart from children with learning disabilities being unable to catch up with peers, there are also many children who cannot keep up and many who do not even have access to any form of education at all.

“The question is what do we want to provide through education.

“They put everyone of the same age in the same class and hope they learn the same thing, ” she said.

Lee said her dream was for full inclusion of all children with learning difficulties.

“According to statistics from Unesco’s International Literacy Day in 2018, more than 260 million children and adolescents were not enrolled in school and six out of 10 youngsters did not have the minimum skills in literacy and numeracy.

“Enuma has developed ‘Kitkit School’, an open-source education app designed to provide children with the foundations and practice needed to build fundamental skills in literacy and math even without access to schools or resources.

“Kitkit School was created for the Global Learning XPRIZE Competi-tion that challenges teams from around the world to develop open-source, scalable software that empowers children to teach themselves basic reading, writing and arithmetic within 15 months, ” she said.

Lee added that field tests for the app were undertaken between 2016 and 2017 in the rural areas of Tanzania, reaching nearly 3,000 children who has little to no education. 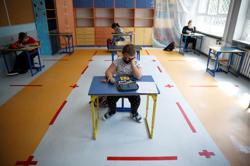