The students after collecting their SPM slips at Matrix Global Schools in Bandar Sri Sendayan.

Despite his loss, Muhammad Haidel tried his best to focus on the exam and was a picture of joy when he collected his results at Matrix Global Schools (MGS) in Bandar Seri Sendayan near Seremban.

Haidel, who obtained 9As, attributed his success to his teachers and counsellors at MGS.

“I also managed to do well through sheer determination and willpower.

“In a way, I wanted to prove to my late father that I could chart my own path in the future.

“This result is the only gift I can give him and I will continue to do well and take care of my mother, ” he said.

Haidel was among 56 MGS students who excelled.

The other top scorers were Lim Tung En (11As), Muhammad Iskandar Mohd Azil and Chin Kee Jane (both with 9As). Five other students obtained 8As.

MGS in a statement said this year’s SPM achievement was the best since the school opened in 2014.

“More than half of the students scored a distinction in English, ” said the statement.

Principal Loh Ghee Juan also congratulated the students and staff for their achievement.

MGS will also host a series of open days from 9am to 3pm on March 14 and from March 16 to 20. The public is welcome to register for the events.

MGS is a private school and provides an international UK-based curriculum, early years education and boarding for students besides offering the national curriculum. 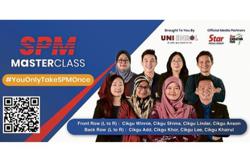