SIBU: Residents in the Oya-Pakoh and Sekuau areas are encouraged to venture into MD2 pineapple cultivation which can help boost their income.

“This MOU will allow landowners to manage and grow their own pineapples on their land and subsequently sell the produce to Alrawda Venture, ” he said.

“It not only boosts the agricultural industry among the locals but most importantly will stimulate the economy through commercial cultivation of pineapple, ” he said. 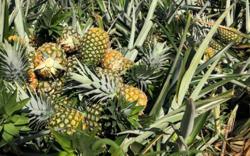