Embracing culture different to one’s own

Wong (left) and Malket are all smiles as they talk about their Chinese New Year traditions.

What significance would the Chinese New Year celebrations have for a Malay, an Indian or a Punjabi? Plenty, as it turns out for fashion designer Rastawati Dewi Abdul Rashid, lawyer Mohd

For the past 20 years, the week before Chinese New Year has seen Rastawati, 45, putting her batik creations aside to get ready for the festivities.

Before this, when Rastawati’s family used to celebrate the new year in Ipoh, Perak, where her business investor husband Kevin Poi, 55, hails from, the festive preparations were always extensive because of the many family members and relatives he has there.

This year, they are celebrating in Kuala Lumpur with Kevin’s mother Adele. Kevin’s brother and his family will join the couple and their daughters Farah Natasha, 16, and Hannah Sara, 12, at their Bukit Jalil home.

Preparations leading to the big day are shared among the family members.

The week before, Rastawati took charge of cleaning the house. Their daughters helped by cleaning their own rooms. Kevin was tasked with buying items from market.

As the couple run their own businesses, Rastawati also makes it a point to decorate the house with live chrysanthemums and lime plants to usher in good luck. This is done on her mother-in-law’s advice.

“My husband and I go to the nursery to buy these plants every year, ” said Rastawati.

Out of respect for her mother-in-law, the family does not sweep the house on the first day of Chinese New Year. Any cleaning must be done at night after the celebrations are over. No one in the family is allowed to wear black during the festive period.

“When it comes to food, everyone contributes. Kevin cooks his special dish — salted egg squid. I do the roast chicken. My mother-in-law takes charge of the yee sang. The fare is usually a mixture of Chinese and Malay flavours, ” said Rastawati.

Among the must-haves for the festive season are love letters and pineapple tarts in addition to the array of snacks and treats her family favours.

“We have no less than five types of festive savouries during this season, ” said Rastawati.

She said it was important that her children knew about the tradition as it was part of their cultural heritage.

For Malket, 63, and his wife Helen Wong, 63, the highlight of the Chinese New Year celebrations is reuniting with their five grown children and two grandchildren.

“The children usually come home a few days before the eve and preparations are done together, ” said Malket.

But a week before that, the couple gets the ball rolling by having pre-celebratory gatherings with friends.

“We meet up and go out to eat. The whole idea is to celebrate with our friends first before our children come home because then, all our time will be spent with them, ” said Malket.

Describing it as a great feeling to be with his family at this time, Malket said he truly cherished the card games and long chats where everyone would walk down memory lane.

After 40 years with Wong, Malket regards the Chinese New Year celebrations as part and parcel of his life.

“The main thing for me is that my children and grandchildren are home, ” said Malket.

Confessing to being a doting grandfather, Malket said he was fond of taking his grandchildren to the park so they can play on the swing and see-saw.

He also buys them sparklers to play with, but they are only available to them under strict adult supervision.

He reckoned that his attitude came from having grown up in a harmonious community — Bestari Jaya (formerly known as Batang Berjuntai), Kuala Selangor.

“During the 1960s, people lived in mixed race communities and everyone got along well with each other, ” said Malket.

The retired technician does not believe in overspending for the festive season.

“I do not have to buy new clothes this year as the children have shopped for me, ” he said.

But he makes an exception for food during this time.

On the reunion dinner menu this year are prawns, fish and sea cucumber.

Though he does not cook, preferring to leave this part of the festive preparation to his wife, Malket does help out by cutting the vegetables.

But the main message Malket and Wong want to share is this: “People should come to terms that there is only one race — the human race, ” said Malket.

People should not have stereotyped views of other cultures and should learn to be more accepting, he added.

When Chinese New Year comes around, the first thing on Mohd Omar’s to-do list is to ensure he has enough fresh notes and red packets to perform the customary distribution of goodwill.

This was one of the first lessons the 52-year-old Muar native learned at his first Chinese New Year celebration 19 years ago.

Just married to Jasmeen Tay Abdullah @ Tay Siew Choo, a breastfeeding counsellor and food kiosk owner, for barely a month, the lawyer had run out of notes and resorted to using coins.

Not wanting to disappoint his wife’s nephews, he had then decided to make the red packets heavier by putting in four RM1 coins instead of two. This act eventually set a precedent for the standard RM4 issue from Mohd Omar’s red packets.

“This is a lucky amount as it is an even number signifying a pair, ” explained Jasmeen, 49.

Remembering his first Chinese New Year celebration as a son-in-law of the Tay family, Mohd Omar recalled being introduced to Jasmeen’s ancestors as the newest member of the clan.

“I stood in front of the family altar as my mother-in-law announced my presence to them.

“Out of respect, I remained by her side and waited for her to finish this ritual, ” said Mohd Omar.

Even then, he made a good impression. He was courteous, helped with washing up and took time to play peek-a-boo with his nephew, a toddler then.

Nineteen years on, Mohd Omar continues to take charge of the red packet distribution and attends the compulsory family reunion dinner at his mother-in-law’s house with Jasmeen and their two children — Aiman, 18, and Ameera, 13.

“I look forward to the dinner every year as my mother-in-law, Chin Yuen Yin, is a good cook. She makes the best vegetarian mee hoon and mock chicken coated in soy sauce, ” said Mohd Omar.

In recognition of her role as the family matriarch, Chin receives a red packet from Mohd Omar every year.

“I hand her the red packet and wish her long life, ” he said.

In addition to attending the

Jasmeen, who regards her family as one that fully embodies the harmonious Malaysian spirit, said they also celebrate other festivals in addition to Hari Raya!

This is because Mohd Omar comes from a family of 17 siblings and among them are those of other faiths.

“We are lucky as our children are able to experience growing up exposed to different cultures, ” said Jasmeen. 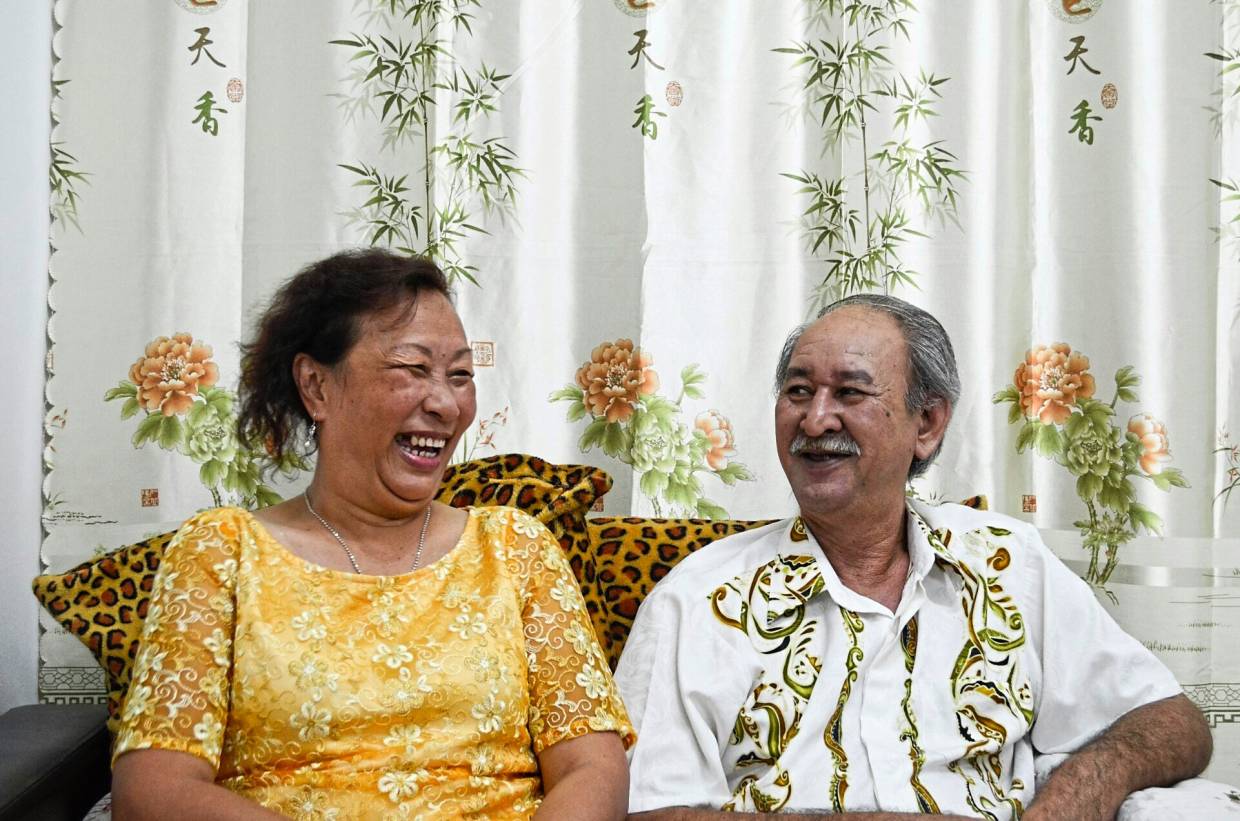 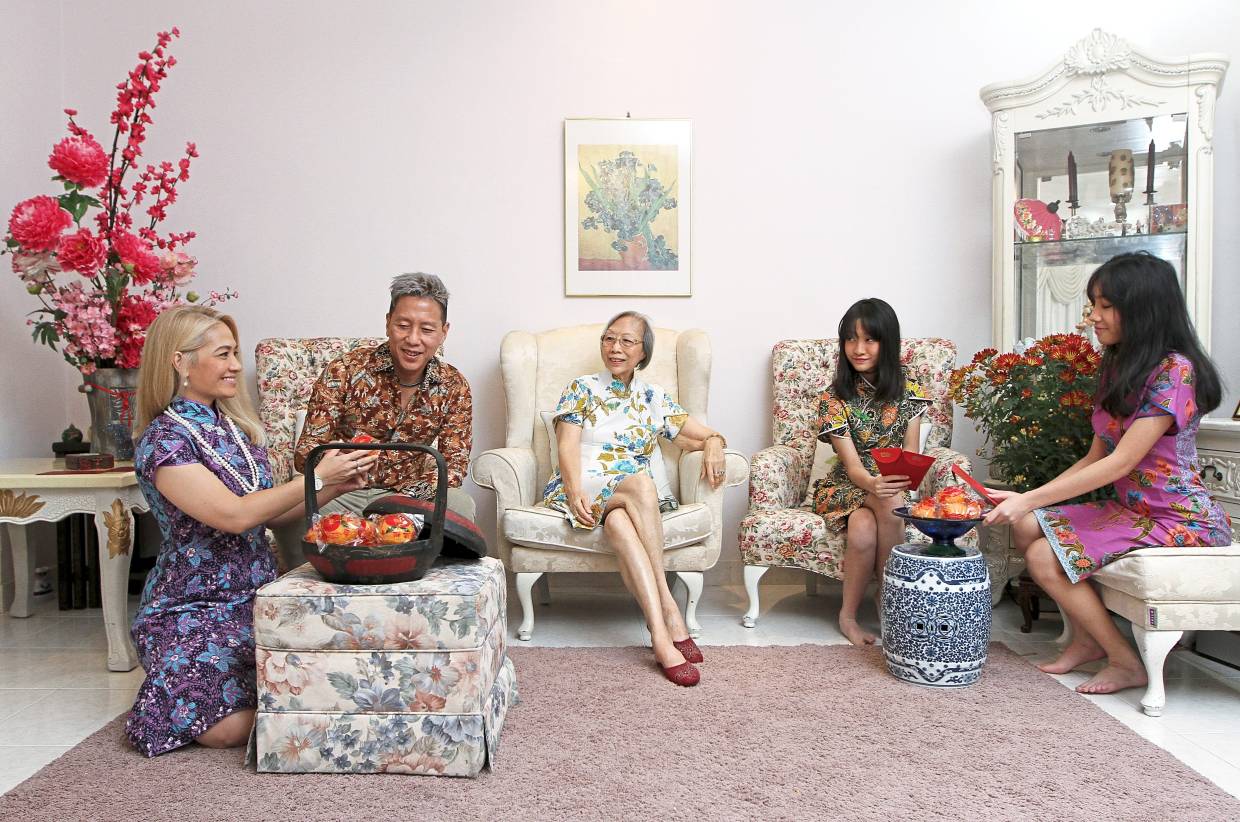 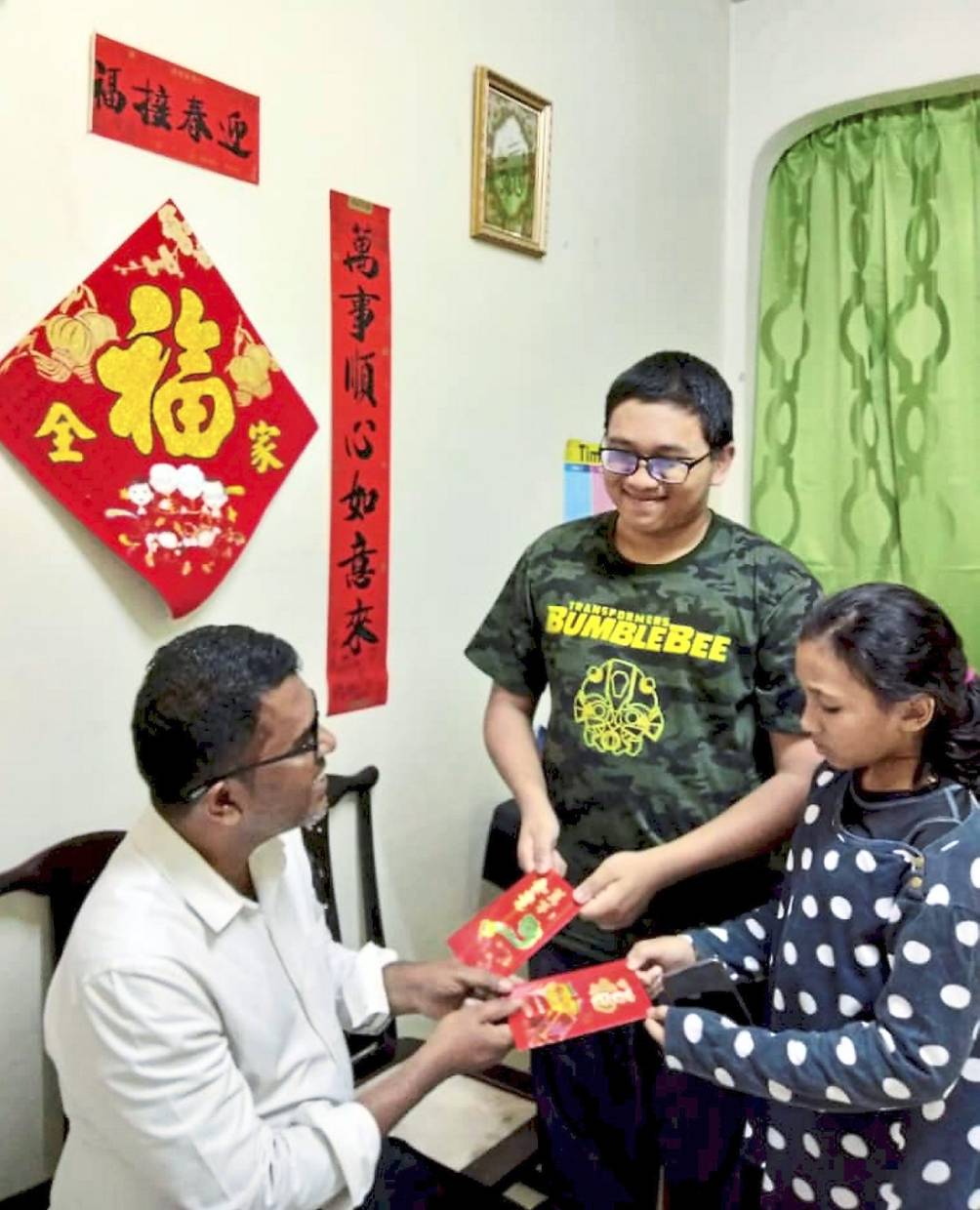 Wong (left) and Malket are all smiles as they talk about their Chinese New Year traditions.

As the man of the house, Mohd Omar (seated) takes charge of the ang pow-giving.

Rastawati makes sure the house is decorated with live chrysanthemums and lime plants for good luck on her mother-in-law’s advice.

Cooking up a storm in the kitchen are (from right) Wong, Malket and their eldest daughter Simi.