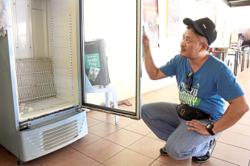 Some of the Felda settlers at the event where they received their land title grants.

KOTA TINGGI: Johor government has allocated RM1mil for restoration works at the Kota Tinggi waterfall. The site was badly damaged during the floods in December last year.

Johor Mentri Besar Datuk Dr Sahruddin Jamal said the work, which would be divided into two phases, was expected to start in early February and be fully re-opened before the school holidays in March.

“The allocation usually takes about three weeks to a month to be transferred and we hope the public will be patient while we conduct repair works at the waterfalls.

“The majority of the works involved infrastructural reconstruction, which is why it has to be closed temporarily, ” he said after the handing over ceremony of land titles to 243 Felda settlers at Felda Lok Heng Selatan here.

Dr Sahruddin, who was on an official working visit to the Kota Tinggi district, checked on the development of the area and hoped to see it grow into a holiday destination.

“Besides the Kota Tinggi waterfall, I have also visited the Kampung Panti Elephant Sanctuary and cruised along Sungai Johor from Kampung Makam.

“In general, Kota Tinggi has its own eco-tourism potential and we hope the public can help the state government transform this district into one of our top tourism destinations, ” he added.

“This is the first time a huge volume of water from the mountain destroyed the facilities surrounding the water park.

“It has also filled the pools with sand, making it more shallow, ” he said, adding that the water slide would also be repaired.

Saipol said the Johor government would request for extra allocations from Tourism Arts and Culture Ministry if needed.

The Kota Tinggi waterfall, located about 15km from Kota Tinggi town and 60km from Johor Baru, has an average of 10,000 visitors a month.