PONGGAL is a three-day harvest festival held in Tamil Nadu, India, and other parts of the world including Malaysia.

It is celebrated to give thanks to nature and in Tamil, ponggal means “to boil” or “overflow”.

The festival is also called Thai Ponggal, which refers to the tenth month in the Tamil calendar, and typically falls in the middle of January.

It is celebrated during the season when rice, sugarcane, turmeric and other grains are harvested.

On the first day of Ponggal —Bhogi — Tamils clean their homes and remove unwanted things.

The act symbolises getting rid of bad habits and negative thoughts.

The second day is dedicated to the sun god Surya, where farmers give thanks to the sun for their crops. The amount of milk that overflows from the pot during Ponggal is said to indicate the good fortune the family will receive for the year.

This is followed by Mattu Ponggal, where farmers and milkmen show gratitude to cows for helping in the fields and providing milk.

Farmers have been known to decorate their cowsheds and cows to mark the festival.

The last day is Kanni Ponggal, which is marked by unmarried women in hopes of getting a good husband.

The Tamils say “Thai piranthal vazhi pirakkum” meaning the birth of the Thai month brings good fortune, and they believe that knotty family problems will be solved with the arrival of Ponggal.

This is also an auspicious time for weddings.

“We are aware about the importance of Ponggal but we celebrate it in a moderate fashion compared to Deepavali.

“I teach my children about the culture and history of all our festivals and how it should be celebrated,” he said.

Chandrasekaran Muniandy, 57, a flower garland maker, said it is good to see Ponggal still being celebrated.

“Celebrating Ponggal in the estate was merrier as we were among family and friends. 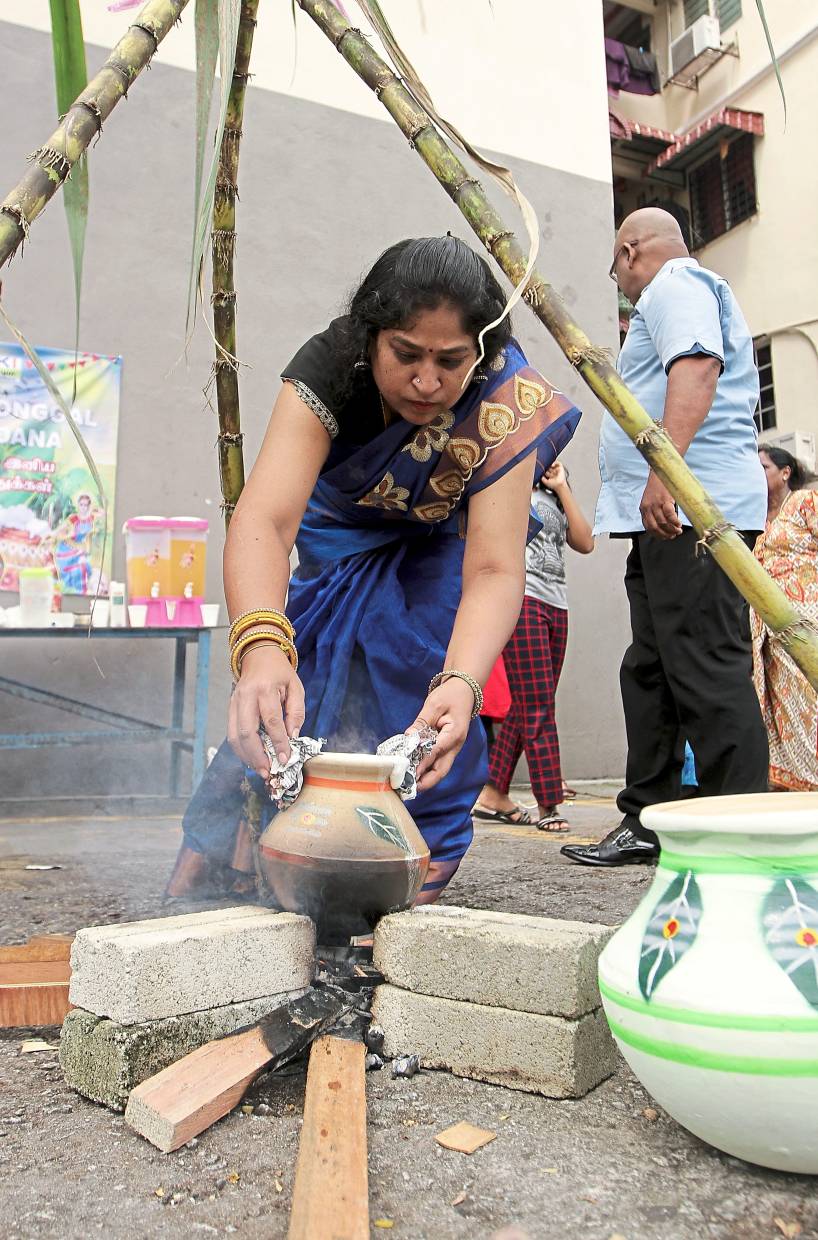 A woman removing the pot from the fire after cooking Ponggal rice.

“City dwellers do not have the facilities to perform Ponggal rituals in front of their houses using firewood as most of them live in high-rise homes.

“My grandchildren are always curious about why we celebrate different festivals so I will tell them,” he added.

Housewife Thenmoli Kandasamy, 32, said this was her first Ponggal away from her family after two years of married life.

“My mother would do everything and all I did was eat the Ponggal rice.

“This year, I need to do all the work from cleaning the house and buying the necessities for Ponggal as my husband and I moved into a new house with our five-month old daughter,” she said.

Thenmoli added that as they live in a condominium, they cannot celebrate Surya Ponggal in front of their home the traditional way.

“I will teach my children about Ponggal,” she said.

Sri Goutham Chakravarthy Moganaraj and Denesshwaran Devan, both 21, have varying experiences with Ponggal.

Denesshwaran said as he grew older, he had forgotten some facts about the festival.

“I know it is to show gratitude to cows and the third day is celebrated by unmarried women,” he said.

Sri Goutham does not know anything about Ponggal as he was not exposed to it when he was younger.