DBKL all out to collect its dues A STAGGERING sum of RM380mil is owed to Kuala Lumpur City Hall (DBKL) by ratepayers as of Oct 31 last year.

This whopping figure in assessment arrears for up to 10 years involves some 240,000 accounts comprising commercial and stratified properties.

DBKL collects the tax from more than 600,000 properties in the capital city, which includes vacant plots of land and abandoned projects.

It is learnt that private companies, particularly big corporations and commercial businesses, owe the bulk of unpaid arrears.

Some businesses owe DBKL hundreds of thousands of ringgit over a period of several years. The task force has about 1,000 DBKL officers and staff from various departments on a voluntary basis to remind ratepayers to settle their dues.

They message the taxpayers individually via whatsapp and SMS.

“This practice is not new and we have done it before, ’’ said Khairul.

“We have to push people to pay up what is due, firstly through friendly reminders.

“But when left with no choice, we will take legal action against those who owe the city money, ’’ he added.

Khairul said DBKL was very reasonable (about collecting assessment fee) and unpaid rent, and emphasised that various avenues were provided to city folk to pay their dues.

Apart from setting up booths in various locations in the city such as shopping centres on both weekdays and weekends to make it convenient for people to pay their assessment bills, rental and traffic compounds, DBKL had in the past sent its staff out to collect assessment fees door to door.

The latter practice proved to be an expensive one for DBKL because the local authority had to pay their staff overtime for the job.

In the latest method, the staff volunteer their time to send out multiple reminders via WhatsApp service – posting DBKL notice urging property owners to pay assessment.

“We urge those with arrears to settle their dues through the various avenues provided, ” said Khairul.

“We are flexible; anyone facing difficulty settling the payment can come meet with us at Level 6 of Menara DBKL 2 in Jalan Raja Laut and we can discuss a monthly payment scheme, ’’ he assured.

Stratified properties form a large number that have not settled their dues, and in the past many of the Joint Management Bodies sought the help of politicians to be exempted from paying.

According to Khairul, about

176 defaulters owing DBKL some RM26,071,659 turned up to negotiate a settlement since the formation of the taskforce.

He said that based on past experience, commercial enterprises which owed hundreds of thousands of ringgit in assessment fees would usually pay up or request to pay in instalments only when DBKL officers showed up at their doorstep during an enforcement operation.

“It is only when officers arrive at their shops to seal their premises or confiscate their goods that they will plead and negotiate payment, ’’ he said.

“My advice to errant ratepayers is do not wait, come to us now so we can negotiate (settlement terms), ’’ he added.

“Another 59 account holders who own vacant lands were slapped with foreclosure notices. The land will then be sold at a public auction of immovable properties under Section 151 of the Local Government Act 1976, ’’ he said.Rent defaulters

Kuala Lumpur ratepayers are not the only ones who defaulted on payments.

DBKL Community Development and Urban Wellbeing Department director Anwar Mohd Zain said the tenants of People’s Housing Project (PPR) and Public Housing for civil servants (PPA) topped the list with some RM50mil in owed rent yet to be recovered.

“We set up a committee to go after these people; some of the defaulters have agreed to pay in instalments but some just packed up and left without settling their outstanding amount. We have had to eventually write off debts worth millions of ringgit, ’’ he revealed.

On top of that, tenants renting DBKL properties in the city owe huge amounts to the local authority too.

Among them are traders renting commercial units such as market stalls and shop lots as well as companies renting DBKL buildings and are unable to find tenants to take space in those buildings.

Khairul also urged tenants to remind their landlords to clear assessment payment for the property they are occupying to avoid their own (tenants’) belongings being confiscated.

Tenants in government housing with rental arrears will have their rental agreement terminated and they will be evicted, besides having their movable properties seized upon the issuance of the notice of claim.

Seized items will be sold at auctions to recover the arrears.

In 2015, saddled with a huge sum of unrecovered debt, DBKL made the unprecedented move to offer incentives to encourage ratepayers to pay up their arrears.

Lucky draws were held that year with over 200 ratepayers winning prizes from cars, scooters and foldable bicycles to television sets, smartphones and tablets.

Even government-linked corporations and financial institutions were offered rebates of up to 50% to pay their assessment tax.

Many criticised the move, saying it made a mockery of the law and pointed out that citizens who did not pay their taxes should not be rewarded but must be penalised.

This year, DBKL is expected to collect RM2.52bil in revenue and this includes RM1.24bil (49.1%) from assessment.

Khairul stressed that prompt payment was crucial in order for DBKL to carry out its work and deliver services to the people.

“If payments are delayed, it will affect projects that we have planned and that is not productive.

“So we urge people to pay their fees promptly, ’’ he said.

Meanwhile, city folk who received friendly messages from DBKL officers urging them to

settle their overdue taxes were taken by surprise and thought it was a scam.

Sports writer Billy Lee received a message on Whatsapp from an individual recently urging him to settle his assessment bill.

“The first thought that came to my mind was that this was a scam, ’’ said Lee.

“It is highly irregular. I mean, who sends a notice on WhatsApp asking for payment?

“But the message contained a notice from DBKL Finance Depart-ment complete with the DBKL letterhead and my details on it.

“The notice stated that I had failed to pay my assessment tax amounting to RM731 as of October 2019.

“The notice was signed by a DBKL employee on behalf of the Kuala Lumpur mayor, and it also showed the employee’s full name and mobile phone number, ’’ he noted.

It was only after he called the number to seek clarification that Lee believed the message to be genuine and immediately paid his assessment fee.

Similarly, Soraya Ahmad from Bukit Jalil also received a text message over Whatsapp from a DBKL employee reminding her to pay her taxes.

“I investigated because the details on the notice were mine and that alarmed me at first. But after clarifying with an officer at DBKL, I was convinced it was genuine.” 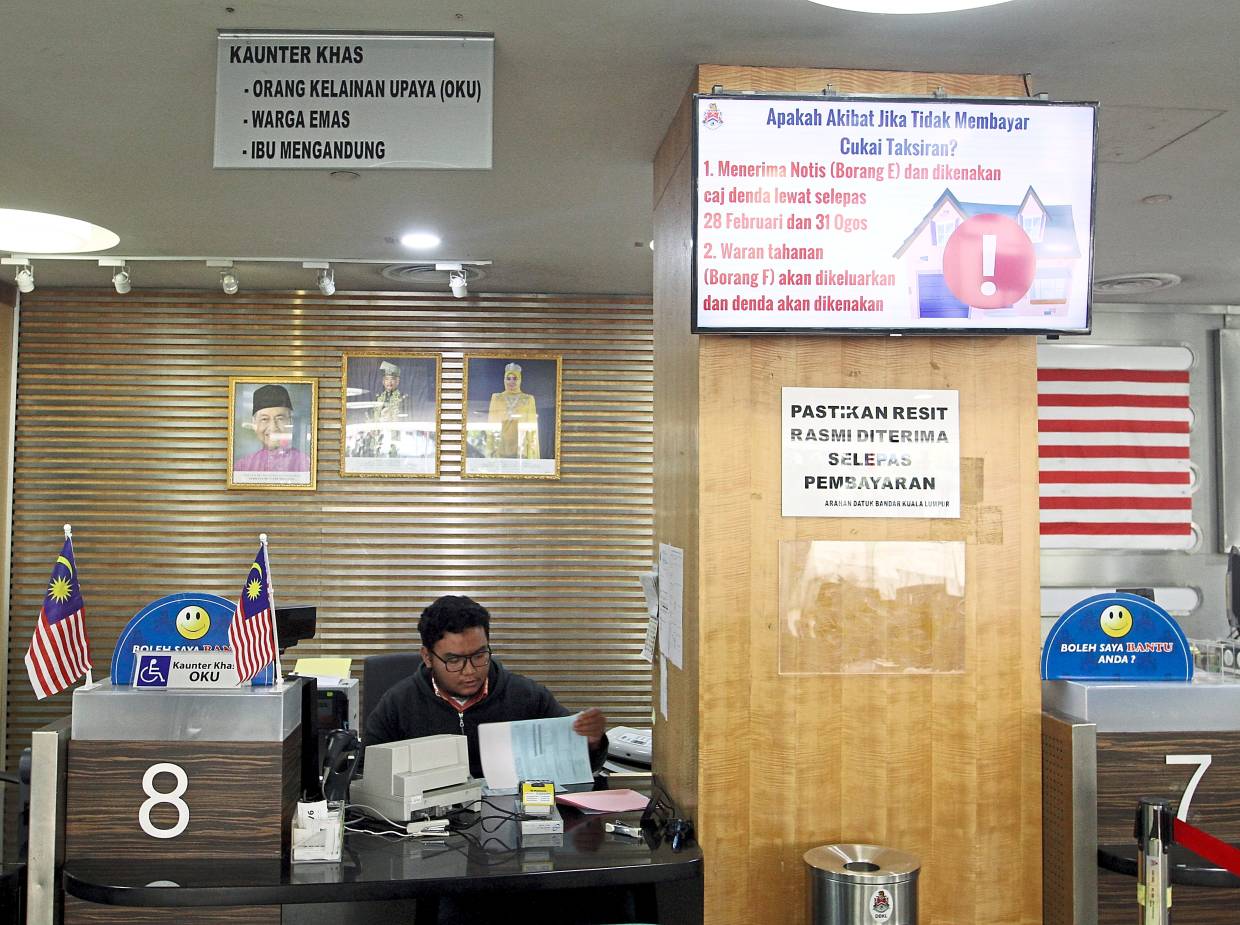 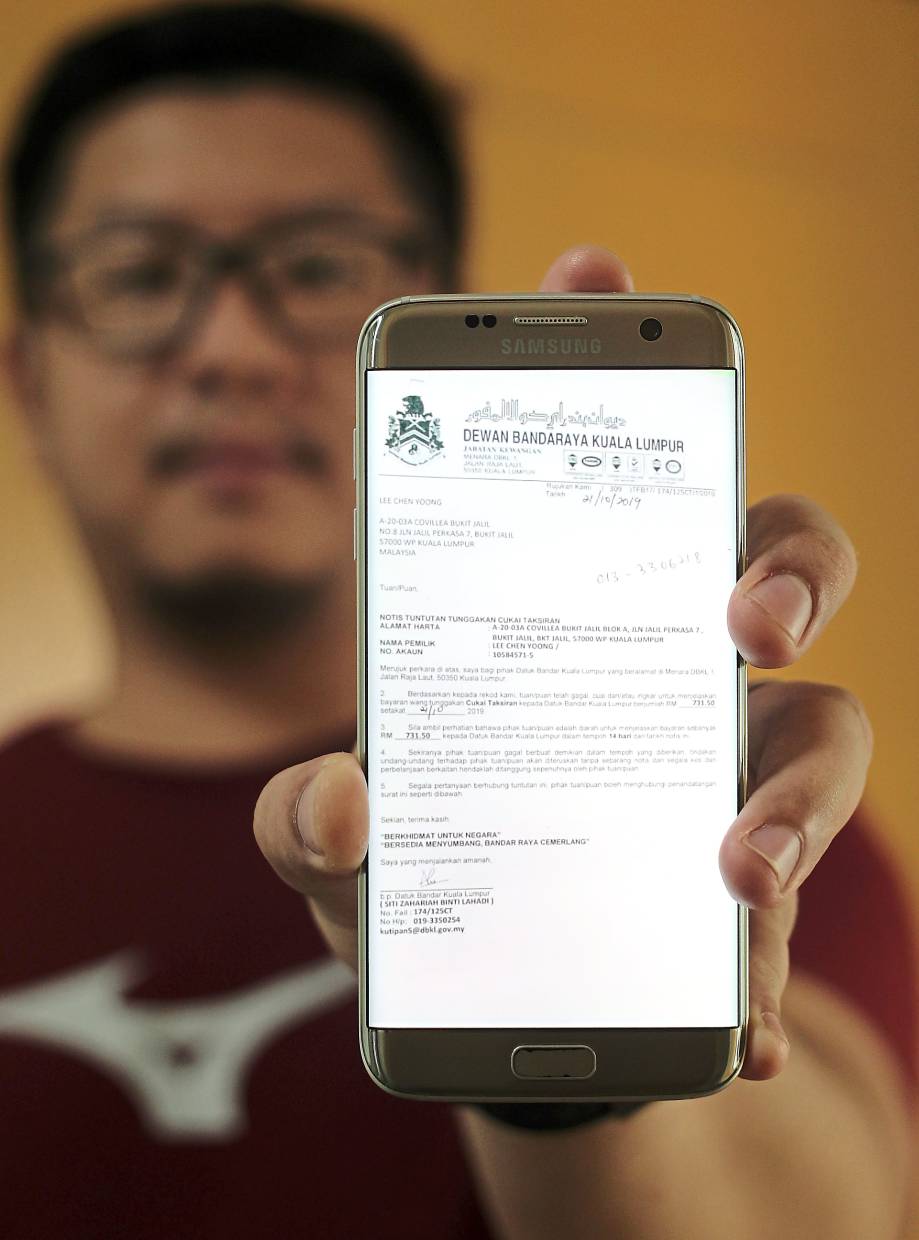 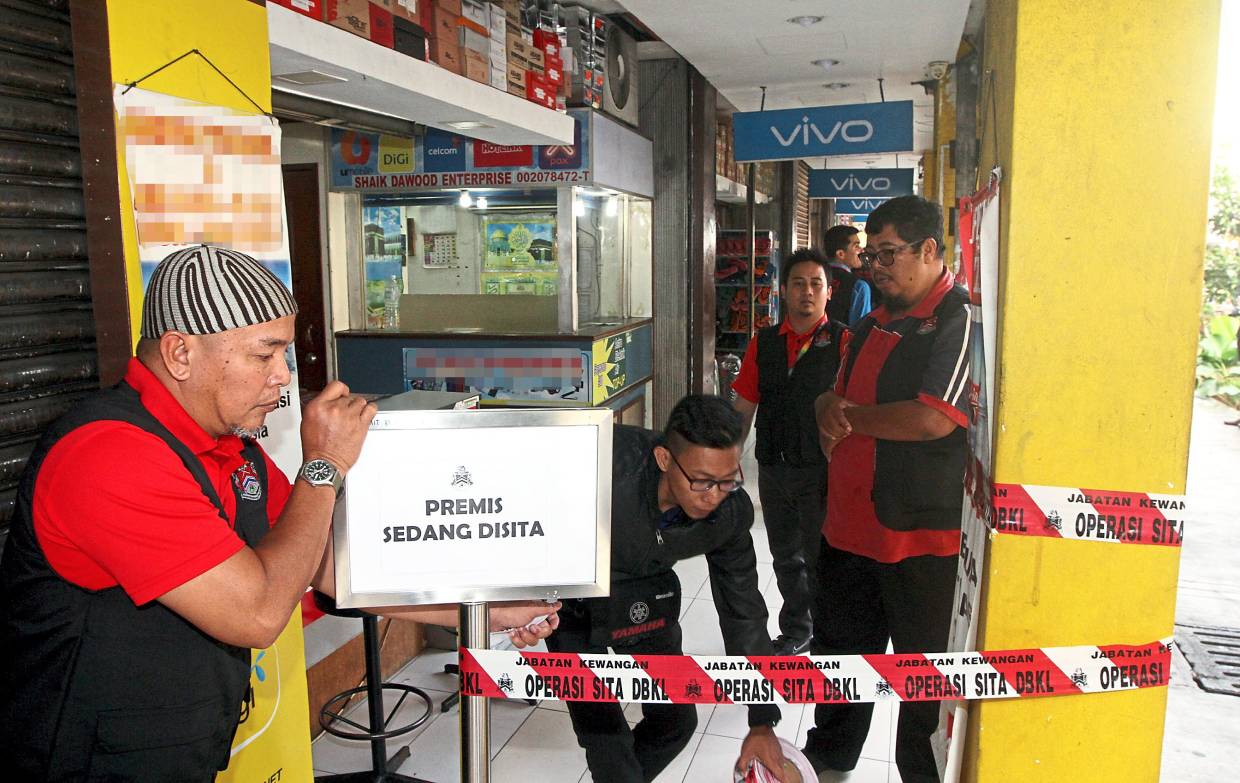 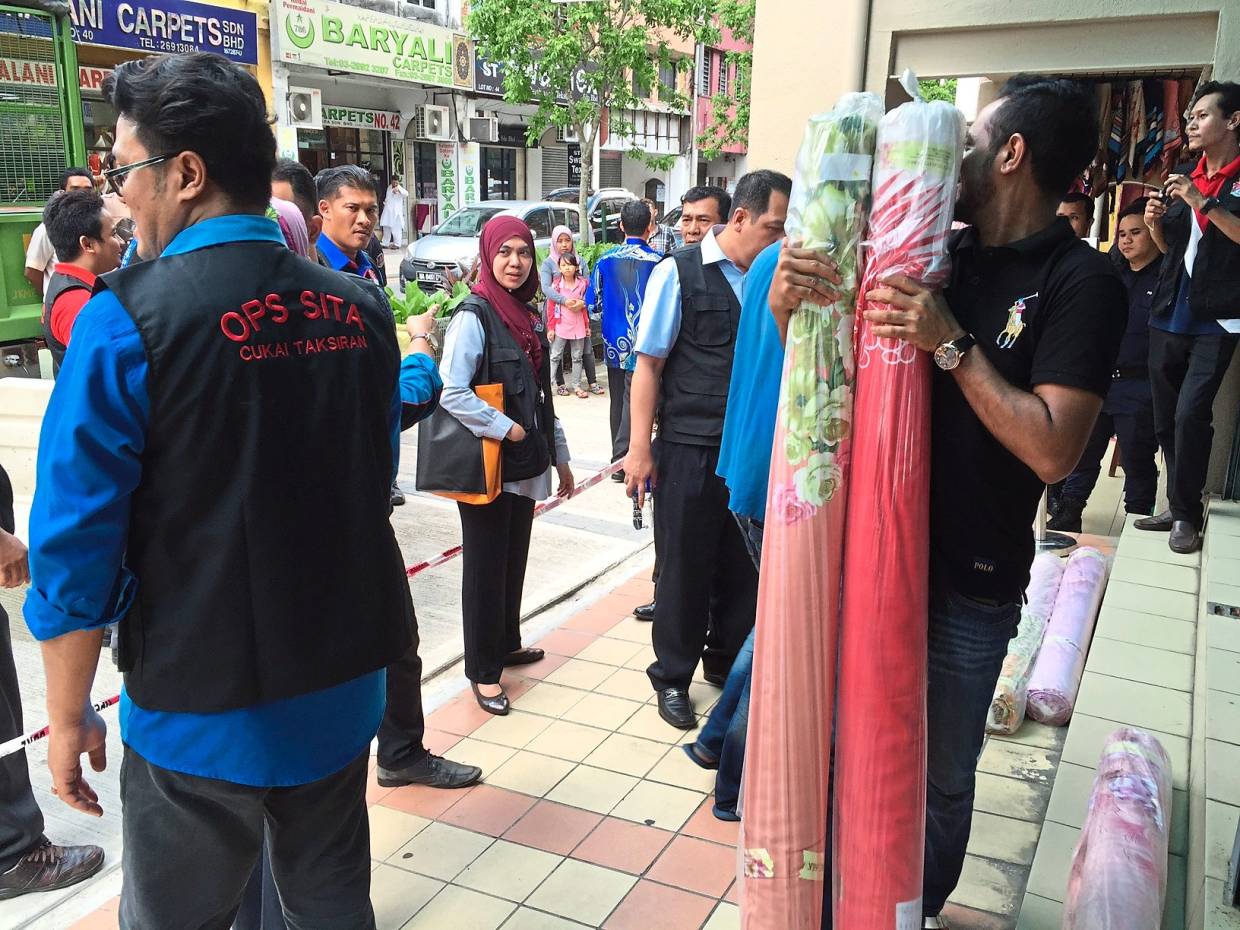 A special counter is set up in DBKL to help make it easier for the disabled to pay bills.

Some residents in the city were caught by surprise when they received a WhatsApp message urging them to settle their assessment tax on time.

A bunting warning of an operation to seize movable property of errant ratepayers.

Counters at DBKL’s headquarters for people to settle their bills.

DBKL officers sealing off a commercial premises during an operation to collect assessment arrears. The seals were removed after the business owner paid the sum. — Filepic

The goods seized from a textile shop being returned after the proprietor paid 30% of the amount they owed in assessment arrears. — Filepic