An MMEA officer retrieving one of the discarded nets from the water.

BATU PAHAT: Two fishermen discarded their equipment and made a run for the shores after marine police caught them using outlawed fishing nets.

“At about noon, during a routine patrol, we saw the two fishermen assembling the nets along the Sungai Ayam river.

“Upon seeing us, they threw their nets out of their boat and escaped to shallow waters, ” he said.

The MMEA then retrieved the discarded nets from the water, which was a total of 24 bubu naga.

Mohammad added that usage of the bubu naga, a long segmented net, had

been deemed illegal under the Fisheries Act 1985 because it was detrimental to the population of aquatic life.

“Illegal usage of these nets will affect the ecosystem as it is not selective, and all fishes, regardless of size, will be ensnared in these nets.

“This will lead to a population decline for all species of fish, ” he said, adding that this also meant lesser yield for local fishermen in the future.

The MMEA reminds fishermen to obey rules and regulations which have been implemented, and any wrongdoings or emergency can reported to the Batu Pahat Zone MMEA at 07-434 4020 as well as MERS hotline 999. 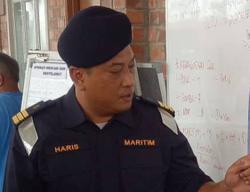