A view of Jalan Station 1 in Klang.

KLANG councillor Dr Loo Cheng Wee has laid out plans for Klang Municipal Council (MPK) to transform Jalan Station 1, off Jalan Station, into a weekend community hub for people to come together and trade.

Dr Loo, who is chairman of the Pandamaran People’s Committee Zone N47C, said the area outside the KTM Komuter station in Jalan Besar was usually quiet on weekends.

In light of that, he said the committee decided to pick Jalan Station 1 for the project to foster street life and vibrancy as well as create a strong sense of belonging among the people living in the vicinity.

“Our aim is to brighten up Jalan Station 1 and Solok Besar with lanterns at night and give the facade of the pre-war buildings a new coat of paint.

“We plan to have about 100 vendors set up business on both sides of the street, ” he disclosed, elaborating that the project was in support of Visit Malaysia 2020. Dr Loo said the trading lots would branch out onto the Solok Besar road where some 25 food trucks selling popular street food would be located.

“After careful consideration, our committee has chosen these two streets for the weekend market because of their accessibility and connectivity to Jalan Tengku Kelana, an Indian business enclave.“We hope to have the weekend market up and running in the second week of April, ” he said.

Pandamaran People’s Committee Zone N47C secretary Mohd Nor Abd Rahman, 60, said the weekend market had to be different from night markets and would offer items such as pre-loved books, handicrafts and traditional foods that Klang was known for.

“Our committee will choose the traders who can offer products that will convince people to make it their favourite place in Klang to visit on weekends. “We will also encourage people to use the KTM Komuter, which has a station conveniently located nearby, instead of driving into Klang, ” he added.

Mohd Nor said the weekend market needed to be extremely interesting and special so that people would be eager to take the short trip to Klang and would feel like they were missing out otherwise.

“After the initial meetings, we have agreed to hold the weekend market starting from Friday from 6pm to midnight and operating the same hours on Saturday.

“We want people to unwind on Friday evenings and hope they will indulge in a staycation in Klang. 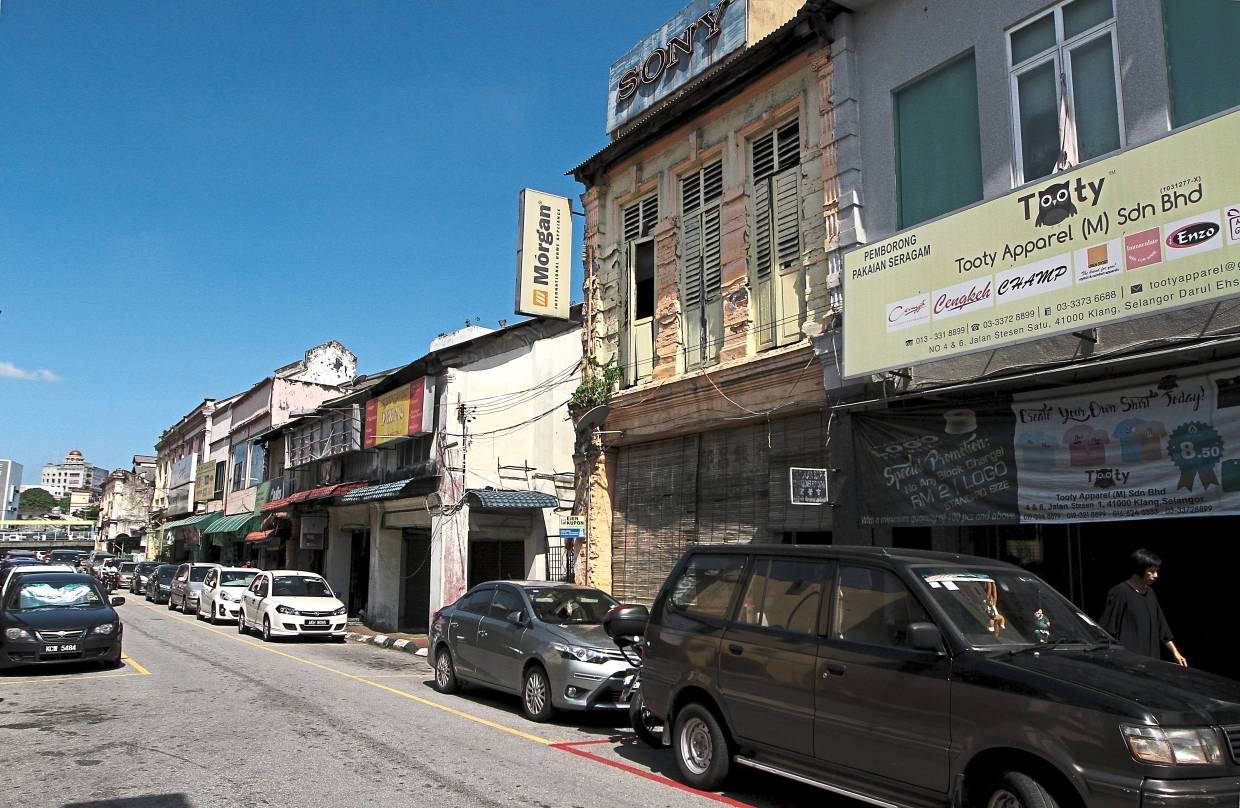 Some of the shophouses in Jalan Station 1 in Klang are rundown.

“There are budget hotels here, and visitors can enjoy the food, do some shopping and walk about to see the historical buildings around this area, ” he said.

Malaysian Institute of Planners president Ihsan Zainal Mokhtar said urban public spaces were crucial to people’s well-being and there was a need for more civic spaces to revive the once bustling areas of Klang.

“People need a place where they can enjoy the arts, culture and entertainment to the fullest, ” he said, adding that this created vibrancy in a town.

Mohd Nor said the committee also had plans to reintroduce trishaws in the royal town, to bring back memories of yesteryear and reduce carbon footprint. Ihsan Zainal said having trishaws would reduce the dominance of cars in Klang and help the public reclaim the streets for cultural and civic uses.

“It is important to review certain areas in Klang and create convivial spaces that will help revitalise the town by bringing in more people, ” he added.

Dr Loo said that in the 1940s, traders used to sell local fare in the alleys but they had disappeared, due to the urban landscape that had changed to accommodate a rapidly growing population.

“We agree with Ihsan Zainal and will work hard to see the weekend market become a happening place, ” he said.