WE ARE all familiar with the sight of enforcement authorities on horseback in the West, the most well-known of which are the Royal Canadian Mounted Police famously called the Mounties.

Some local authorities in Malaysia have also established mounted units.

While Klang Municipal Council (MPK) has shut down the unit that it operated from 2003 to 2008, Kuala Lumpur City Hall (DBKL) and Putrajaya Corporation (PPj) still maintain theirs.

MPK’s reason for doing so was due to the high cost of maintaining the mounted unit.

Apart from being used for law enforcement in public parks, the authorities say these horses also serve as an attraction for visitors.

DBKL Horse Unit chief inspector Ruzailina Zainal Abidin said there are currently 69 horses in the team’s care. The majority – 46 – of them are at the Taman Tasik Titiwangsa stable and the rest are housed in the Bandar Tun Razak stable.

“The horses are brought into the paddock to warm up for 45 minutes before patrol, ” she explained, adding that the horses also took part in parades and city events regularly.

Ruzailina said that unlike bicycles and motorcycles, horses could traverse the terrains of local parks more easily.

“Horses can jump over drains and move up a steep terrain without much difficulty, as opposed to bikes and motorcycles which are limited to the walkways, ” she said.

“The horses make for an interesting sight in the city and local parks. Many people like to take pictures with them, ” he said, and added that the Horse Unit Complex in Putrajaya housed 29 horses.

“DBKL was the first local authority in the country to have a horse unit.

“Since then, we became a reference point of sort for other local authorities that were interested to set up a horse unit of their own, ” she said.

According to Ruzailina, DBKL initially bought thoroughbreds from Australia.

“They are tall and more boisterous. This breed of horses is easy to ride and good for racing.

“But since 2013, we began buying warm-blood breeds from Europe. These are bigger and more suited for patrols, ” she elaborated.

Currently, DBKL has 131 personnel comprising administrative staff, enforcement officers and general workers tasked with the day-to-day maintenance of the stables.

“Our thoroughbreds were bought from Australia.

“Last year, we bought five warm-blood horses and one Arabian horse to replace the old horses, ” he said.

Among the first recruit was inspector Abdul Malik Mat Hussain.

“We then sat for the O-Level certification issued by Malaysian Equine Council, which qualified us to ride and manage the stables, ” he said.

Caring for the horses

Keeping the mounted unit running is no walk in the park, as the horses need regular cleaning and medical check-ups to ensure they are healthy.

Ruzailina said the stable in Taman Tasik Titiwangsa was cleaned every day.

“The horses are regularly inspected for injury, especially around their legs and tendons. Their shoes have to be cleaned daily too, ” she said.

She added that the horses would be taken for a walk on the beach once a year to help them release stress.

“Our officers would ride them into the water in Port Dickson so that the horses could splash about. This helps the animals maintain good temperament, ” she said.

In addition to visits to the beach, Abdul Malik said PPj horses were allowed to roam freely in the paddocks every Friday.

“Horses can also get stressed out, so it is crucial that they be given space and time to roam free and let off some steam.”

He said the handlers had to be mindful in letting only horses of similar breed out together in the paddock to avoid possible fighting, which could result in injury.

“After the morning patrol, the horses will be bathed and brought back to their stable for feeding, ” he added.

Rozaimi said the horseshoes were replaced every month.

“We also have a veterinarian from Universiti Putra Malaysia to vaccinate the horses, ” he said.

Prior to being flown to Malaysia, both DBKL and PPj horses are neutered and spayed to eliminate breeding.

Male horses that have been castrated are called gelding.

As the horses were from Europe, Ruzailina said it was important to help them adjust to the hot weather in Malaysia.

“Prior to arrival, the horses are quarantined for a month during summer in their original country.

“Once here, they are quarantined again for about two weeks at the airport before being brought to the stables, ” she revealed.

Ruzailina said a healthy horse weighed on average 500kg to 800kg, and sufficient nutrition as well as regular feeding were crucial to maintain the weight range.

“The horses are fed four times a day, at 5am, noon, 6pm and 10 pm. Their food consists of varied portions of food pellets, electrolytes and hay for fibre and protein, ” she said.

Meanwhile, Rozaimi emphasised on regular training in the paddock to help the horses familiarise with various conditions.

“The horses were trained to navigate around poles. Occasionally, loud music would be played to get them used to disturbances.”

He said the horses were normally bought when they were around five to seven years old.

“This is the age at which they are most fit. The service duration for a horse normally spans about 20 years, though this depends on their usage and care too.

“Once a horse reaches the sunset of its life and becomes uneconomical to keep, it will be given to veterinary faculties in universities for research, ” he said.

He added that PPj horses were fed five times a day, at 5am, noon, 5pm, 8pm and midnight.

Rozaimi disclosed that each horse cost on average RM2,000 to RM3,000 to maintain.

“This amount includes medical supplies and food that is imported. The horseshoe that needs to be changed monthly, cost RM180, ” he said.

He added that each horse was also assigned a saddle, which cost RM3,000 each and could be used for 10 years. 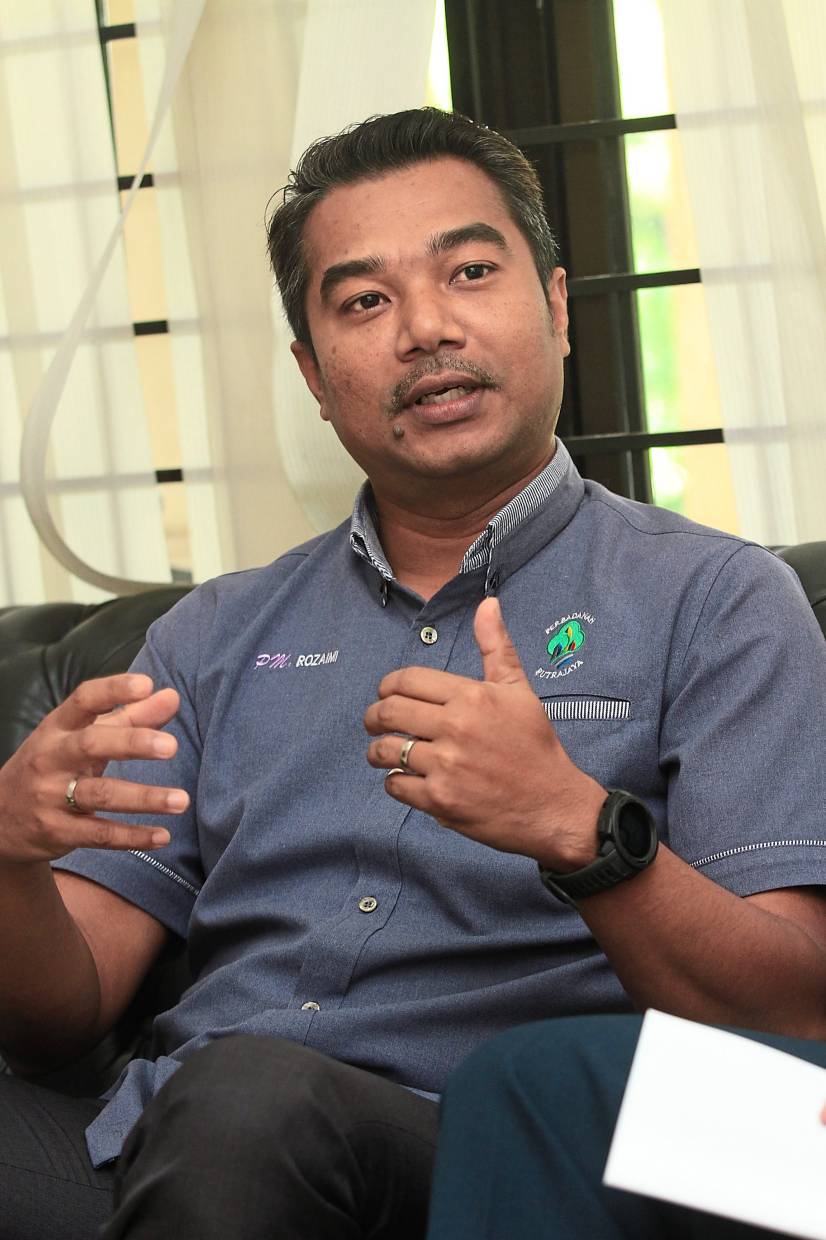 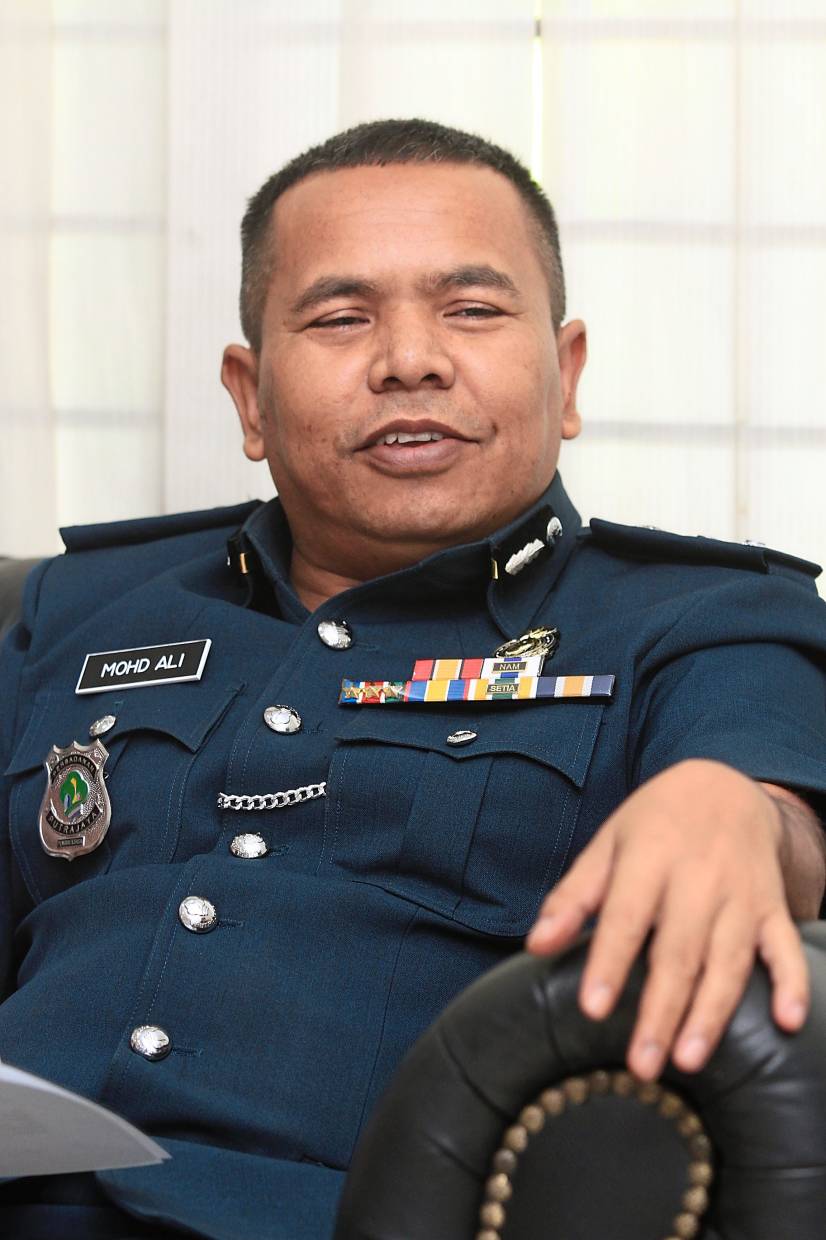 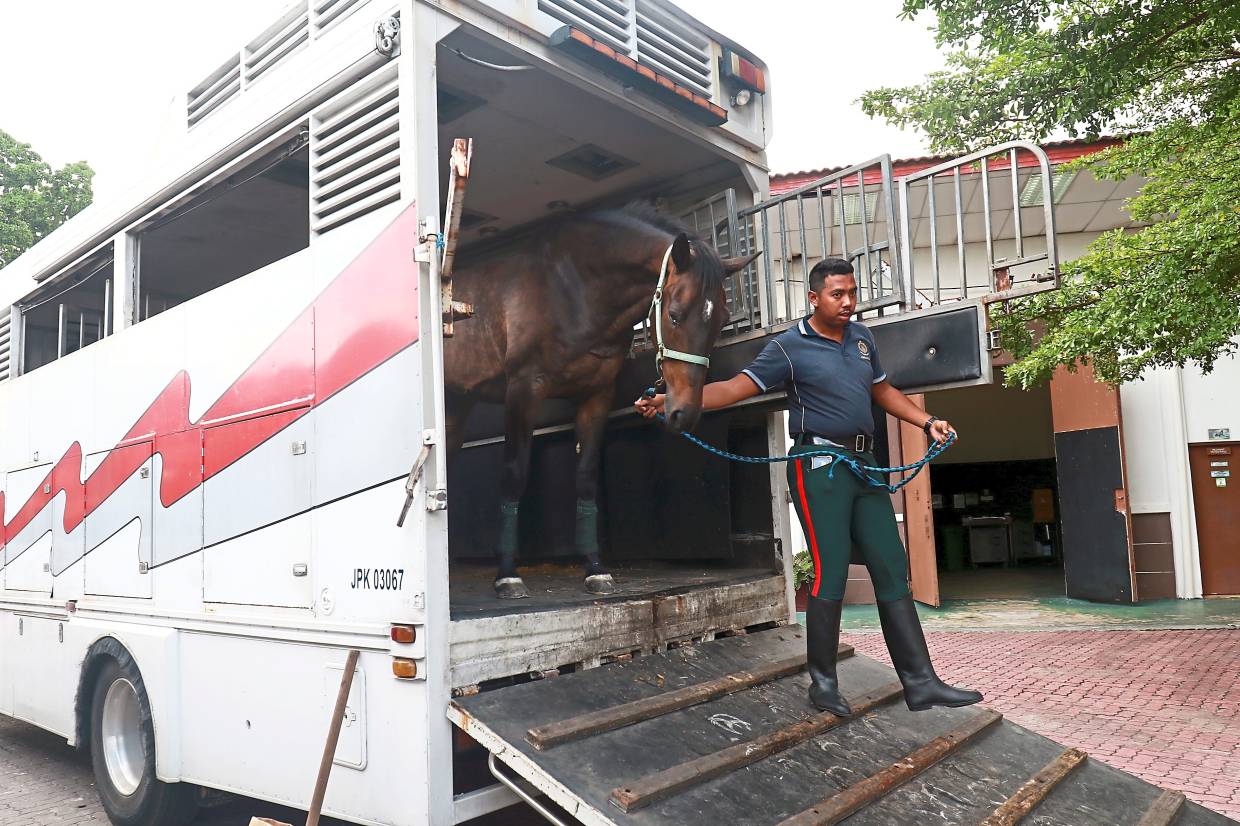 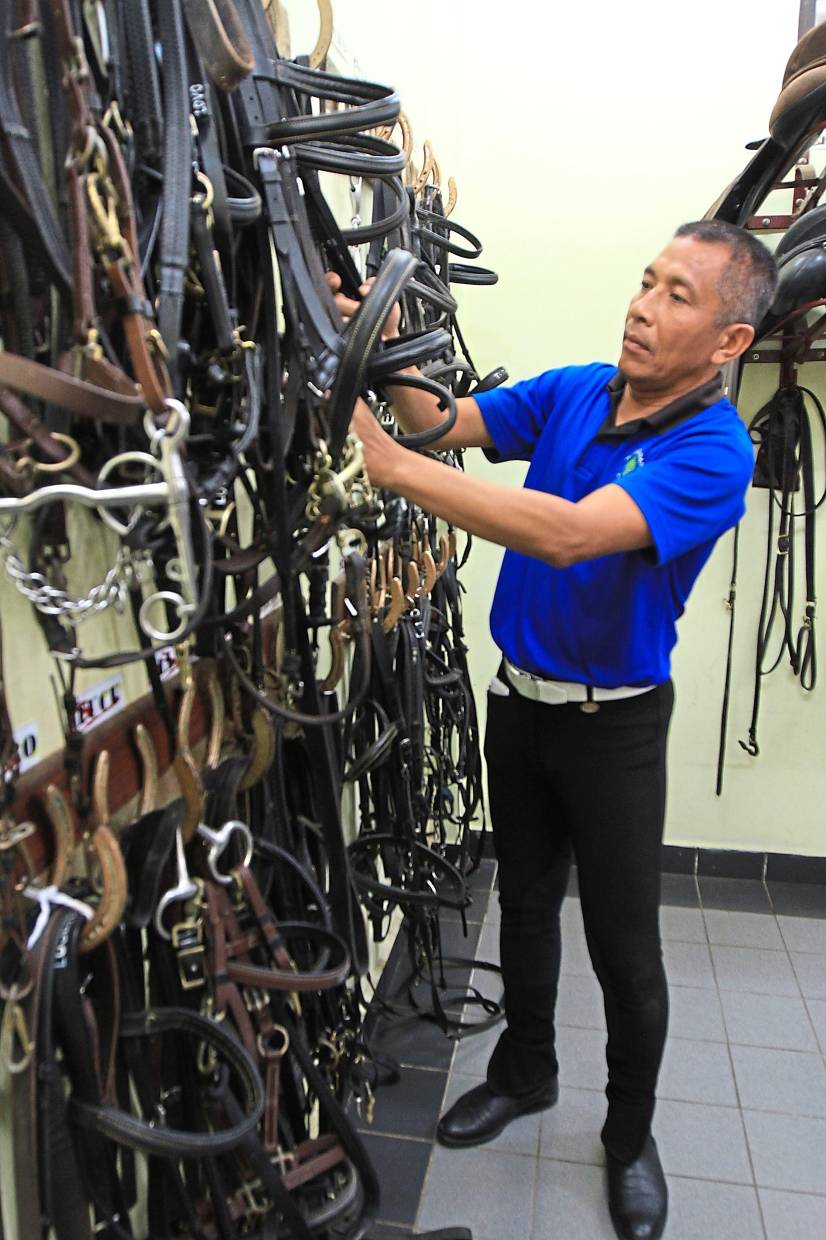 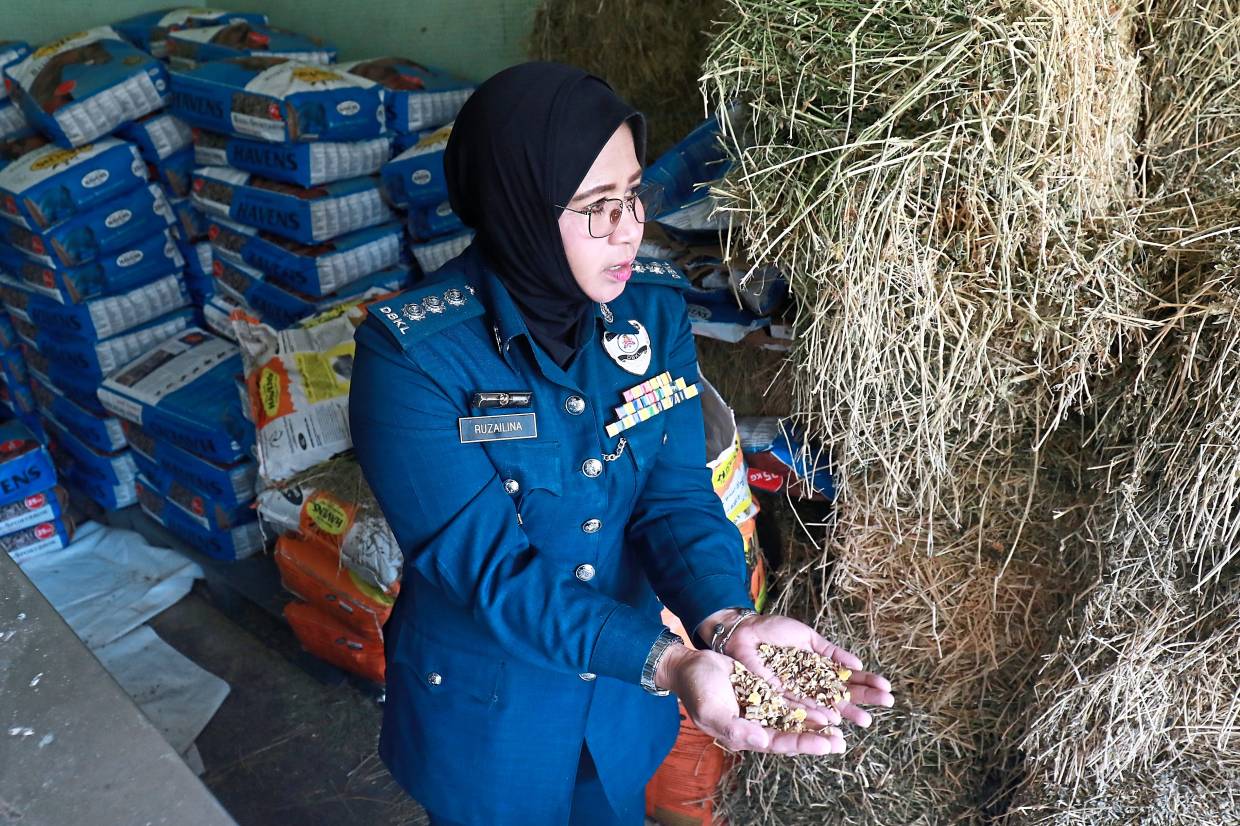 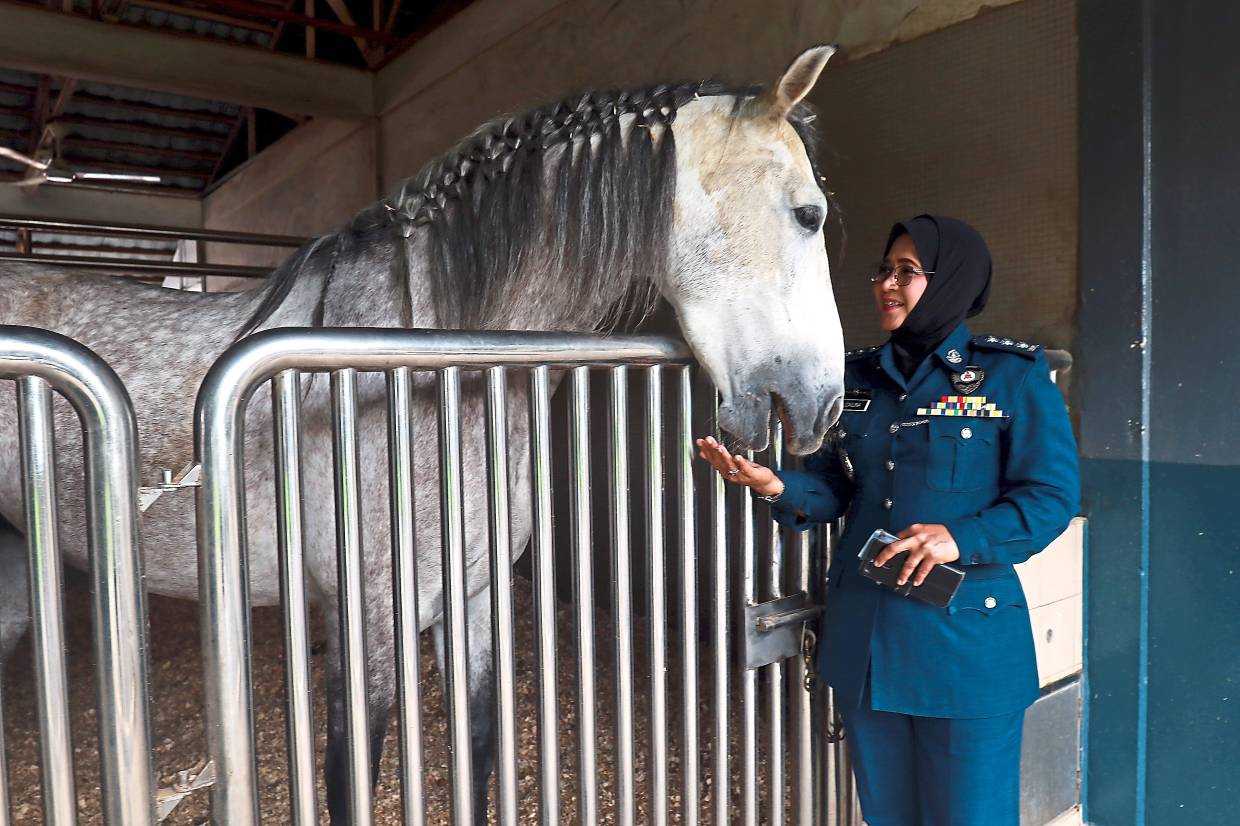 Rozaimi says the mounted unit is part of PPj’s enforcement arm and the horses are an attraction in Putrajaya.

A DBKL employee leading a horse out from a transporter at the Taman Tasik Titiwangsa stable after a patrol at another park.

Malik putting away his saddle and bridle in the equipment room at PPj’s Horse Unit Complex.

A member of PPj’s mounted unit preparing his horse for a cool washdown.

A worker at DBKL’s Taman Tasik Titiwangsa horse stable bathing a horse after a morning patrol.

Ruzailina with one of the 46 horses at the Taman Tasik Titiwangsa stable.