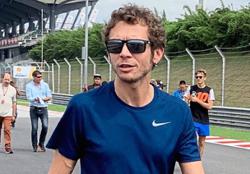 French tourists pose with Mah Meri dancers from Bukit Bangkung and the Visit Sepang Year 2020 mascot at the official launch of the tourism event by Sepang Municipal Council.

It was proposed that she should be a candidate for tourism ambassador for the Visit Sepang Year 2020 (VSY2020) promotional campaign. That her father Chendren Balakrishnan, who is special officer to Tanjung Sepat assemblyman Borhan Aman Shah, had distributed VSY2020 flyers at all his daughter’s competitions in Beijing, Abu Dhabi and Bangkok, was also a plus factor.

There is no official decision on this yet but as recognition for her skating achievements, MPSepang presented her with a RM1,000 cheque and RM2,000 in sponsorship fees for her event costumes and tracksuits in December.

An adorable brown mascot also became the subject of debate at an earlier council full board meeting when it was brought up that “Atan”, its chosen name, also meant female donkey in the Arabic language.

However, as its moniker was a common, easily remembered handle for many locals, the council stuck to its decision. Visitors to the Visit Sepang Year 2020 exhibition booth by MPSepang at KLIA were intrigued with this mud crab set up by a boat tour operator to showcase the type of marine life and fauna visitors can look forward to seeing.

It was a gruelling trip and health department director Kuzaini Hamidon had to finish the remaining legs of the tour in a van after coming down with fever.

Another stunt followed in the form of a 30-strong team up Mount Kinabalu to fly the VSY2020 flag eight months later.

Meanwhile, ideas poured in as to what could be offered as tourist draws.

The river cruises in Sungai Sepang and vast intertidal zones of Bagan Lalang beach which are already a favourite destination for anglers and picnickers were touted as star attractions. E-scooter ride sharing company Tryke, has finally been issued a licence by Sepang Municipal Council to operate in Cyberjaya.

A secluded spot near runway 32L of Kuala Lumpur International Airport was named as a hangout spot for aerophiles by like-minded councillor Hazimun Rahmat Mohammad, who suggested a recreation area be set up here during an urban beautification meeting.

Malaysia Airports responded by building an elevated deck sturdy enough to accommodate 40 people at one time.

The quaint town of Sungai Pelek made it to the tourism promotion list too.

A grand century-old bungalow in Ladang Teluk Merbau that was featured in Planter’s Tales, a book on plantation life by Mahbob Abdullah, and a ferry service behind Taman Ria, which takes motorcyclists and pedestrians across Sungai Sepang to Bukit Pelanduk in Seremban, were named as must-visit spots.

Because of the tourism drive, the name of late farmer, Hashim Pardi from Kampung Labu Lanjut, would forever be remembered by future generations as “Hashim Bom”.

Visitors can seek out village chief Damarulan Hassim for an oral history of how Hashim found an unexploded bomb believed to be left behind by Japanese forces during World War 2.

Hazimun says this secluded spot near runway 32L of KLIA is popular with visitors, making it a potential tourist destination for Visit Sepang Year 2020.

The element of suspense lies in how Hashim had thought nothing of carrying a bomb home with his bare hands. It was believed that the danger of the thing exploding did not cross his mind until alerted by a fellow villager.

On safety concerns over the many boats offering sightseeing tours in Sungai Sepang not having licences, MPSepang Corporate Unit and Public Relations director Norrehan Amat Kasman said through ongoing efforts with the Marine Department, six operators, all based at Jetty Sirip Biru in Bagan Lalang, were now authorised to carry passengers.

However, boat operators and fishermen have reasoned if the authorities want to collect fees, they must do their part to preserve the river.

it involved many agencies, it would take time.

A recent check revealed the situation at the jetty had not improved. Sree Abiraame was touted as a candidate to become tourism ambassador for the VSY2020 promotion campaign.

The fishing community, however, is looking forward to better fish hauls in the coming future with artificial reefs installed some two nautical miles off the Sungai Mesok Jetty at Kampung Batu Laut in Tanjung Sepat in October.

This is the fourth installation of artificial reefs in the area. The first two were in 2006 and 2008, involving 34 units. Another 19 units were introduced last year.

Meanwhile, Tryke, an e-scooter ride sharing company that launched its service in Cyberjaya in November has finally been issued a licence by MPSepang to operate in the area.

Norrehan said approval was granted based on an established docking base system that encourages users from leaving the vehicle outside of its designated parking space, failing which, they will continue to be charged on a per minute basis.