Seven new traffic lights will be installed at this dangerous junction of Jalan 8/38A and Jalan 6/38A inTaman Sri Sinar, Segambut.

SEVEN new traffic lights will be installed at the T-junction of Jalan 8/38A and Jalan 6/38A in Taman Sri Sinar, Segambut next month to ensure the safety of motorists.

Currently, this busy main road is used by people going in and out of Desa Park City, Taman Sri Bintang, Jalan Lang Emas and Jalan Segambut, including residents in areas such as Taman Sri Bintang, Taman Indah Bintang, as well as high-rise dwellers in Prima Tiara 2, Villa Kristal, Angsa and Nova 1.

“This road used to be quiet but because more apartments and neighbourhoods were built about four years ago, it is now a very busy road.

“Now, we see at least one accident a month along Jalan 6/38A.

“There was one in October involving a major collision and a fatal accident in September, ” said Residents Representative Council (MPP) Segambut representative Deric Teh during a site visit.

Teh said many residents expressed their concern over the dangerous junction and hoped some form of safety measure would be put in place.

They proposed that traffic lights and speed bumps be installed to compel motorists to slow down.

“Most accidents happen here because motorists tend to speed along this stretch, and they drive dangerously as well as encroach into the opposite lane at the junction. 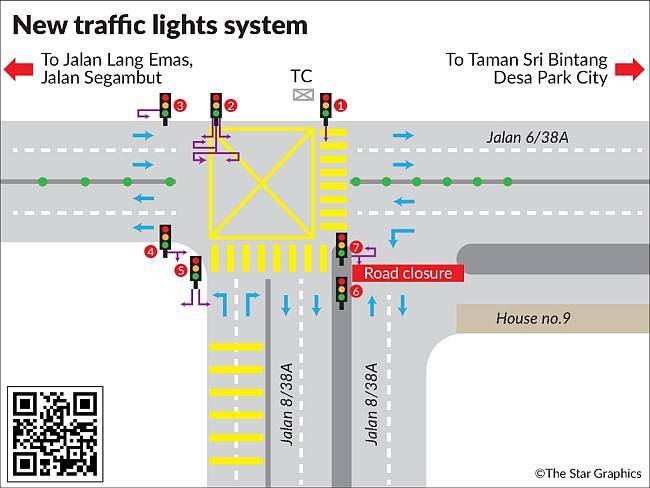 “During peak hours, motorists have to slowly inch out and hope that oncoming vehicles will give way and stop, ” he said.

Numerous meetings and site visits were carried out last year, and DBKL agreed that traffic lights would be installed at the junction.

“There is no definite date on when the traffic lights will be installed, but it could be sometime in December, ” said Ken Chia, special assistant to Segambut MP Hannah Yeoh.

Chia said two zebra crossings complete with pedestrian crossing buttons fitted on three of the traffic lights would be included.

“We will need to close one of the slip roads along Jalan 8/38A when the traffic lights are installed, ” he added.

Jalan 8/38A is separated by a road divider.

One side is a two-way street nearer to the housing area while the other side of the divider is a another two-lane street.

“It was recommended for the road nearer to the houses to be closed in order for the traffic lights to work.

“If it remains open, motorists can still take the slip road, bypass the traffic lights and turn onto Jalan 6/38A, which would be dangerous, ” Chia explained.