Scary fun with the walking dead

IT WAS an unusual sight at a rojak and cendol stall next to Tasik Taman Sri Rampai in Kuala Lumpur and at Chow Yang night market in SS2, Petaling Jaya, where two lurching zombies were spotted.

Passers-by were quick to swipe their phone and record the scene before the relentless walking corpses, inspired by South Korean zombie apocalypse action thriller Train to Busan, hissed and tried to lunge at them.

The zombies were part of a publicity gimmick by Suria FM Wheelers and 988 Cruisers to promote the Train to Busan Horror House at Resorts World Genting.

The Train to Busan attraction “departs” for adventure at the Skytropolis Indoor Theme Park, Genting Highlands, from Friday to Sunday until Dec 1, and daily from Dec 2 to Jan 1, 2020.

At Taman Sri Rampai, Suria FM Wheelers shared information about the attraction and quizzed visitors at the rojak and cendol stall.

Those who were quick to answer the questions earned goodies that included Suria FM merchandise, movie tickets and complimentary Train to Busan Horror House tickets.

Student Farah Azwa Samsudin, 17, was among those who won a free Train to Busan Horror House ticket. 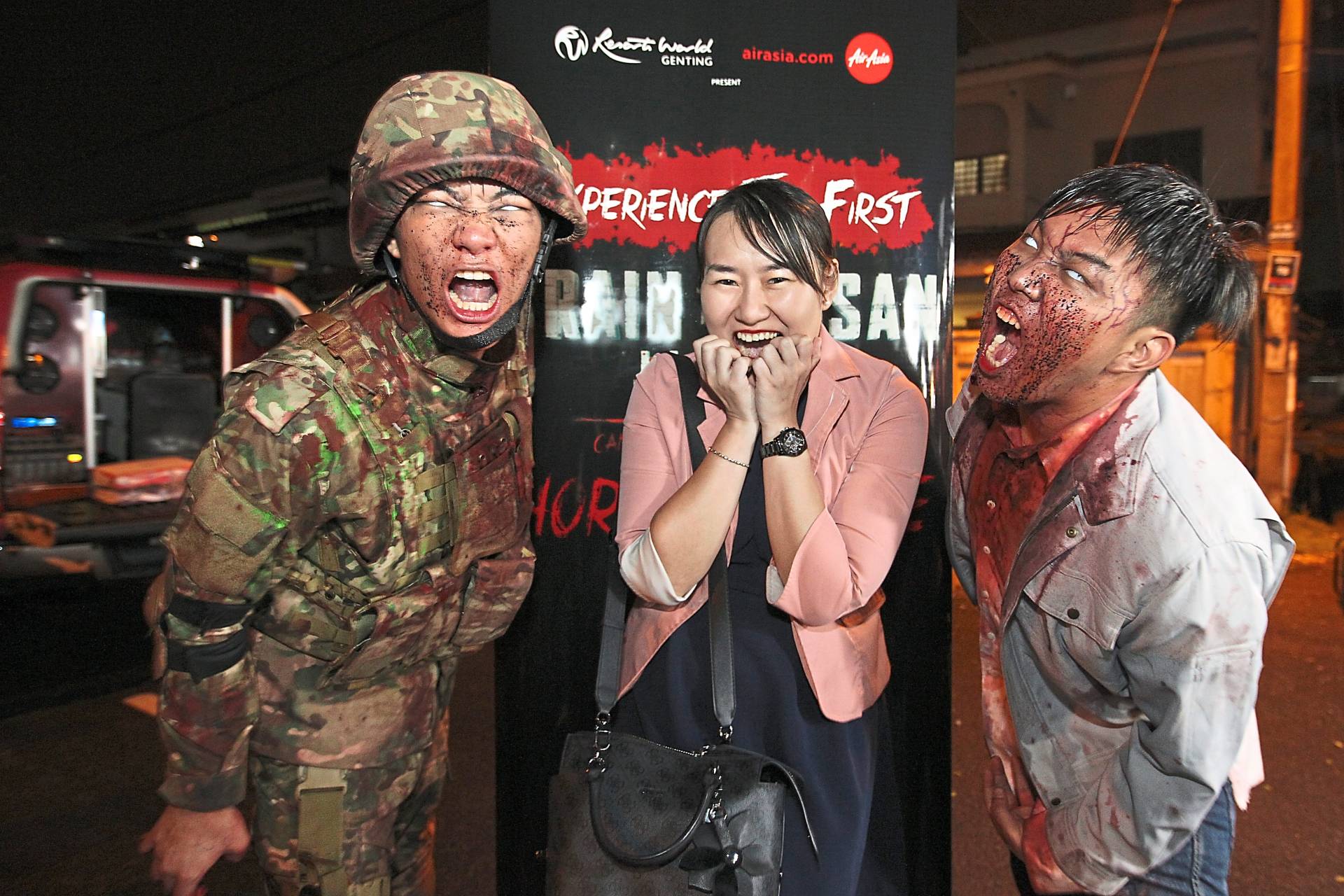 Tan, who won a Train to Busan Horror House ticket, with the zombies at Chow Yang night market.

“I heard about this new attraction and was planning to visit it after my SPM examination.

“Now that I have a free ticket, I will definitely go with my family or friends,” she said.

Farah Azwa’s schoolmates, who were at the stall, also won a complimentary ticket each.

Executive Nur Ardianie Shaiful Azha, 27, who was nearby for lunch with colleagues, won a ticket as well.

“Although the zombies are just humans with makeup, they look so real that it gives me the chills.

“This kind of on-ground activation is interesting and I am glad that I happen to be here today,” she said.

At the Chow Yang night market, two zombies roamed the streets and tried to scare unsuspecting members of the public. 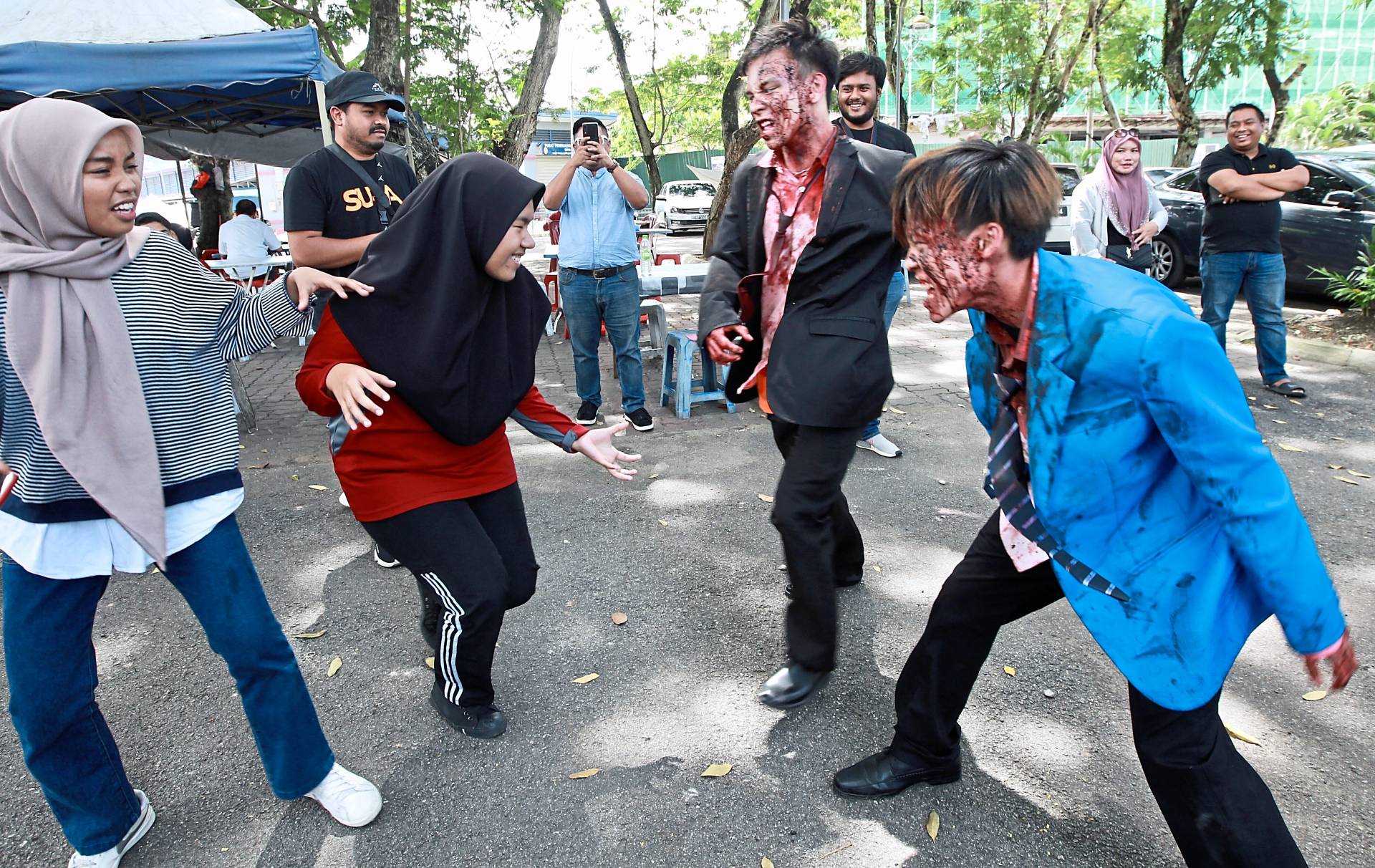 Visitors cringing at the sight of the zombies near Tasik Taman Sri Rampai, Kuala Lumpur.

The gimmick pulled off by 988 Cruisers had night market visitors cringing and some children were seen scurrying away from the “man-eating” corpses.

The fearless ones were seen taking pictures with the zombies.

A total of 12 Train to Busan Horror House tickets were given away to those who took part in 988 Cruiser activities or posted pictures of themselves with the zombies on Facebook or Instagram.

One of the winners, Tan Peck Cheng, said she had followed the whereabouts of the 988 Cruisers on Facebook just to catch a glimpse of their activities.

“I followed them but did not expect to see two zombies here in the night market.

“Although horror films scare me, the experience can be rather exhilarating.

“I think I will visit the Train to Busan Horror House with my mother,” said the 33-year-old administration manager. Accounting student Low Pei Yin, 20, who posted a picture of herself with the zombies, also won a free ticket.

“The zombies are really scary and look exactly like the ones in the Train to Busan movie.

“The gimmick is quite special and I have high hopes for the Genting attraction,” said Low, who will be going with her friend.

A Train To Busan Horror House single admission plus Skytropolis Preview Pass combo package is available at RM128, and guests looking at skipping the queue can opt for an additional Express Pass at RM30.