Jeremiah laying a wreath for his fallen comrades at the Cenotaph. — Photos: LIM BENG TATT/The Star

GREY and cloudy skies added to the solemn mood as 520 people honoured fallen heroes at the 18th Remembrance Day ceremony at the Esplanade in Penang.

Among them was a man who fought during the Japanese Occupation in World War II and the Malayan Campaign.

James Jeremiah, now 95, is the only surviving WWII veteran of the Eurasian ‘E’ company of Penang, a volunteer force similar to the British Home Guard.

Jeremiah said that this could be his last year taking part in the ceremony, considering his age.

“I have lived through bad times and now, better times. 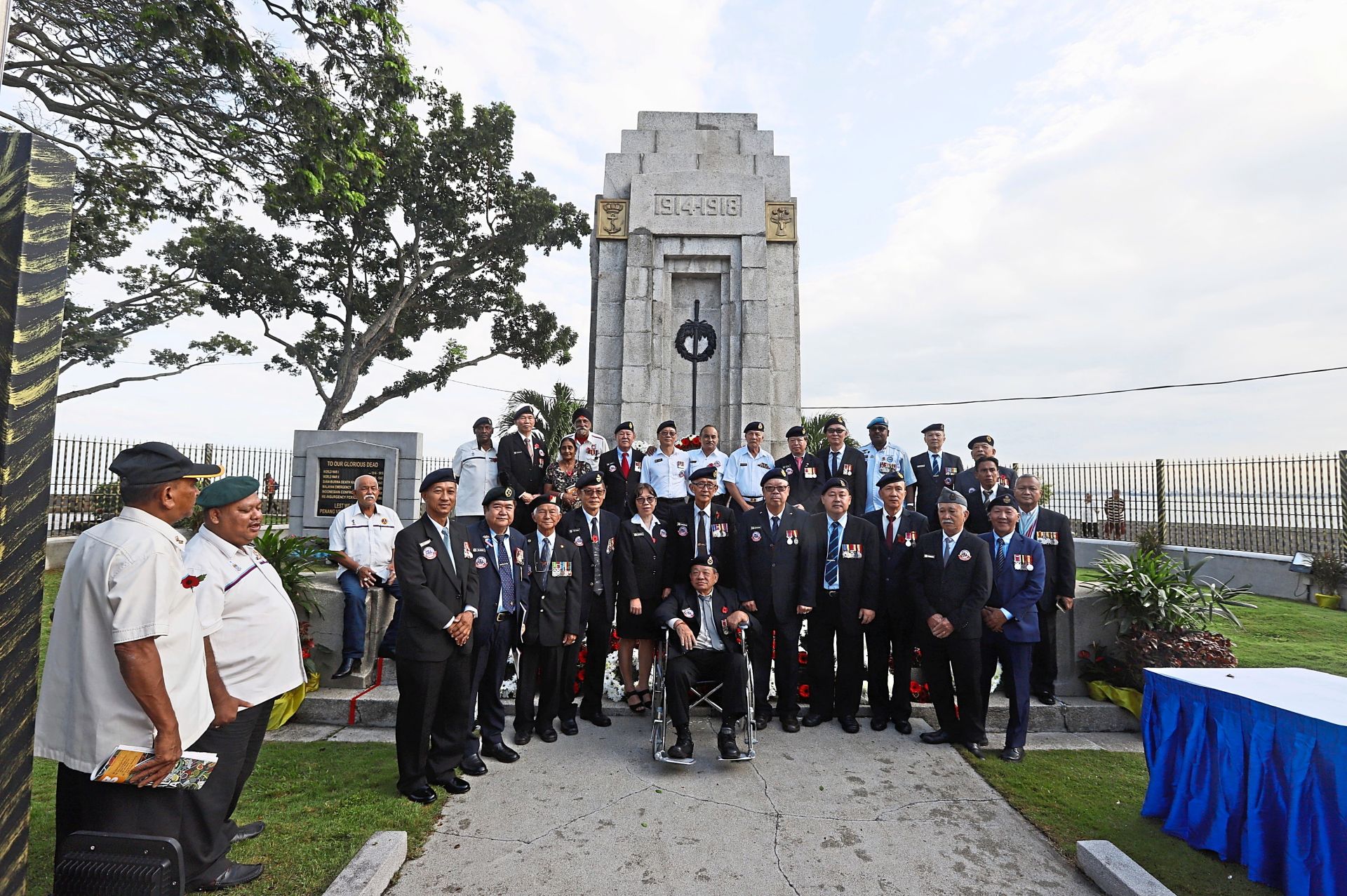 Members of the Malaysian Army Chinese Veterans Association and other veterans posing at the Cenotaph.

“As we honour the dead, I hope that people will also take a moment to commemorate the living who survived the war.

“I hope young ones today will cherish the freedom we fought for in the war, ” he said when met at the ceremony at the Cenotaph on Sunday.

The event, organised by Penang Veterans’ Association (PVA), was held to show gratitude to the fallen heroes of World War I, World War II and other armed conflicts.

“The tombstones of the fallen heroes in our country are a concrete evidence of their sacrifices for a better world of freedom for us, ” he said in a speech at the ceremony.

Sivarajan said that during the Malayan Campaign in World War II, a total of 1,345 Malayan troops and policemen lost their lives defending the country.

“At that time, other forces from Britain, Australia, New Zealand, Southern Rhodesia, Fiji and the Nepalese Gurkhas came to our assistance and they lost 519 troops.

“Thousands of civilians too lost their lives as the Malayan Campaign lasted for 12 long years and ended in 1960. A band playing ‘Amazing Grace’ and ‘‘The Flower of Scotland’ with bagpipes at the 18th Remembrance Day ceremony at the Cenotaph at the Esplanade.

“This was one of the few successful counter insurgency operations in the world and we appreciate those involved, not forgetting those who did not make it home, ” Sivarajan said.

He said Malaysians below 60 years of age would have little or no knowledge of the sacrifices by the veterans.

“We have to revive memories so that we do not take for granted the peace we enjoy, ” he added.

“I hope there will never be another military conflict as we are peace-loving people.

“Wars are too costly for not only human lives are lost but also property and the environment are damaged, hampering well-being and progress.

“In the last 60 years since the end of the Malayan Campaign, we have achieved so much without conflicts.

“Let us not take this freedom for granted as it was obtained through blood, sweat and tears of the heroes, ” he said in his speech.

Afterwards, they took turns to lay wreaths at the foot of the cenotaph as a symbol of appreciation for the fallen soldiers.

Those present were from the British High Commission and High Commissions of Nepal, Canada, Fiji, the Consul Embassies of Britain, Canada, Denmark, the defence advisors of United Kingdom, India and Australia as well as members of the New Zealand Army with veterans from the Naval Association of Australia in Western Australia.